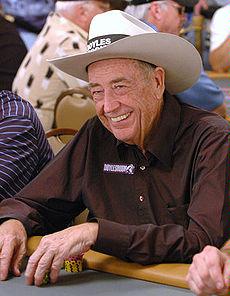 Livivng Legend Doyle 'Texas Dolly' Brunson, the "Godfather of Poker" is a two-time World Series of Pokerchampion and the greatst poker player of all time. He is the author of the best-selling "bible" of poker, Doyle Brunson's Super System, its sequel, Super System 2, and three other books including Poker Wisdom of a Champion.

P. Hoben
5つ星のうち3.0 Irrelevant nowadays
2020年11月15日に英国でレビュー済み
Amazonで購入
Now being used to give a monitor some height. This is a huge book. Although the advice and info in it is probably great when you are playing high stakes live poker. In my opinion the info in the book isn’t really relevant anymore for low stakes online players. Which I’m sure if your an online player you know what a calling station or a donk is.
I doubt I’ll ever read it again as I’ll never sit down in a Vegas casino with £100k bankroll at a table of nine live players .

binpoet
5つ星のうち1.0 Fantastic player with a fanatastic career with a now awfull book.
2014年1月6日に英国でレビュー済み
Amazonで購入
Doyle Brunson could be argued to be the best poker player of all time. ( although not the most profitable) He was making money pre- internet playing in games so completely different from today. He has however adjusted his game with the changing times and still outplays many a new hot shot internet hoodie.
If he was to right a book from scratch today I'm sure it would be awesome and would be almost as acclaimed and well received as his first super system book was all those years ago. The problem with this book is its an update of super system 1 where really the former is so dated a completely fresh start was needed.
Sorry Doyle loads of respect for the man, no respect for this rehash.

tomrankin
5つ星のうち4.0 Some Good, Some Bad
2014年6月11日に英国でレビュー済み
Amazonで購入
This book is good for certain games that you might not play yet such as Triple Draw, but others could do with more information (such as the Omaha section). The Hold'em section is pretty much unchanged from the first book and is a good primer for the beginner with certain concepts still hiding up today. Just don't take that section as the be all and end all of playing the game.
続きを読む
1人のお客様がこれが役に立ったと考えています
違反を報告
レビュー を日本語に翻訳する