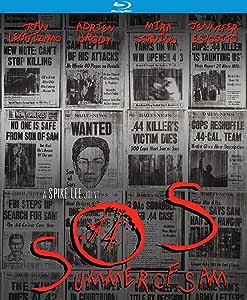 J. Alazruei
5つ星のうち5.0 A WEAVE OF TERROR AND IGNORANCE BRINGS DISCRIMINATION AND THE PIECES DON'T FIT ANY MORE
2017年3月2日 - (Amazon.com)
Amazonで購入
So many people missed this story when it went to theaters. I saw it then and I have seen it two more times!The true story of a serial killer is wound around the so right on with the fear it brought and the blame for the killings is wrongly surmised that the killings were done by one of the neighborhood's group of young adults. All the prejudice spins out of control as the story shows the case of the killer is affecting people's fear and actions.It continues with side by side moments where real tv reports and newspaper headlines makes the people of the neighborhood where this occurs are run, with short snips of tthe actual psychotic murderer slips out into the night and randomly attacks couples sitting in cars talking after fun nights of partying in the disco scene or punk music performances in small concerts begins to start the "punk" scene in NYC.
Flashbacks of the killer in his tormented pain with irrational thoughts in between music dancing and lines at CBGB's to get in for a punk band to play, all swirl to come together as the detectives are getting closer and the neighborhood "punk" rocker,comes out with typical punk garb and a new mohawk. This film shows underlying prejudices and hate that the fear and anxiety and unfair accusations actually bring out as wrongful and dangerous assumptions as people suspect others in their neighborhood that stand out because they are different .As the police messages from the murderer, tension rises within the whole community, and then through NYC's burroughs because of the horrific murders. As the music keeps playing between the punk concert and the disco dancing, paranoia sets in and some as sort of wonder if certain people are the serial killer and it becomes so strong that it is decided who the murderer is. The prejudices, the unfair assumptions, the homophobia, the drugs, the disrespect and taking advantage of women,the club music and dancing, the ignorance and sad mistakes and the way the whole series of events in this film; all tie together to display a true portrait of NYC neighborhoods in the end of the1970's. Finally, the killer is caught making relief the largest emotion. As people started to carry on and think that once again things are normal-that it is over, they start to realize that foolishness, anger and blame on close friends has caused broken faith and a realization that because of ignorance, because of how friends and family were treated wrongly, their lives will never be the same. That just like the much bigger thing of murdering others, mending relationships and building trust again may just never come true.
This film was great, Spike Lee got the whole situation down pat. Blending the major psychotic true story, along with news flashes from the time, along with the people that try to go back to before and put their lives back together.
The story shows how these serial murders have changed things and some may not ever gain back the love or the close friendships that were there before the first gunshot.

Darryl Wren
5つ星のうち5.0 Summer of 77 in NYC!
2017年6月5日 - (Amazon.com)
Amazonで購入
Very underrated movie in my opinion...one of my favorite Spike Lee "joints"...very well acted and written in a way to make all of the stories and characters interesting! I remember following the 'real life' story in the summer of 77 (I live in Chicago) of "The Son of Sam" who supposedly got his 'marching orders' from a dog named "Harvey" who was owned by his neighbor who's name was"Sam"! Told in a very realistic 'cuts across all racial lines' approach that I found refreshing...for those who may not fully know the story it's a good buy!
続きを読む
4人のお客様がこれが役に立ったと考えています
レビュー を日本語に翻訳する

Jamie
5つ星のうち5.0 Great Price Good Delivery
2013年6月10日 - (Amazon.com)
Amazonで購入
I lived in NY when all of this happened. The night of the blackout was my daughter's 2nd Birthday. It took 10 hours to see if the lights would come back on, they didn't we had to walk up 10 flights of stairs to get to our apt in the pitch black. No water no toilet. I remeber all of this like it was yesterday. The looting, Son of Sam.
I remember now that I live in Ca, when the Towers got hit, my Boss @ the time said to me, "there's going to be alot on crime tonight in NY" I was so insulted!I knew in my Heart of Hearts that NY would stand together! & We Did! I LOVE NY! & this movie as dark as it is was the example of life in The City!
続きを読む
5人のお客様がこれが役に立ったと考えています
レビュー を日本語に翻訳する

zooni
5つ星のうち5.0 Summertime in the NYC
2011年4月19日 - (Amazon.com)
Amazonで購入
I like how this film doesn't center the whole plot around the serial killer Son of Sam. It's also a story of some of the lives of New Yorkers who were traumatized by the endless murder spree that terrozied a nation. I love how Spike Lee portrays the over the top personalities of typical New Yorkers, especially Italians. I grew up around people like this so it's ammusing to me, and reminds me somewhat of my own family. I love Adrain Brody's character, Richie. I thought he did an amazing job. The acting by John Leguizamo and Mira Sorvino were also intense. There were some amazing scenes with both of them that keep you mesmorized. Even though this is considered a thriller, there are some comedic scenes that cracked me up. I'm a big fan of Spike Lee. He captures New York life with an uncanny science. Summer of Sam is up there with some of his best works.
続きを読む
2人のお客様がこれが役に立ったと考えています
レビュー を日本語に翻訳する

Murphy2323
5つ星のうち3.0 Disco meets Panic in the Streets
2014年5月21日 - (Amazon.com)
Amazonで購入
This movie does not tell the story of The Son of Sam. It tells a story about a neighborhood during the time of the Son of Sam shootings in NYC. It's more about a group of friends and what they are into than it is about the famous murders. It's fun watching John and Mira dance and the music is of that time and it takes you back. They should do a real movie about The Process, the satanic cult responsible for all those killings. Berkowicz was their fall guy and he was NOT crazy. Read Maury Terry's "The Ultimate Evil" if you want to know about the Son of Sam killings. It is a real eye opener.
続きを読む
4人のお客様がこれが役に立ったと考えています
レビュー を日本語に翻訳する
Amazon.comのカスタマーレビューを見る(210) 5つ星のうち4.1
Amazonプライム会員ならお急ぎ便、日時指定便が使い放題
さらに、映画もTV番組も見放題。200万曲が聴き放題 。クラウドに好きなだけ写真も保存可能。
> プライムを無料で試す