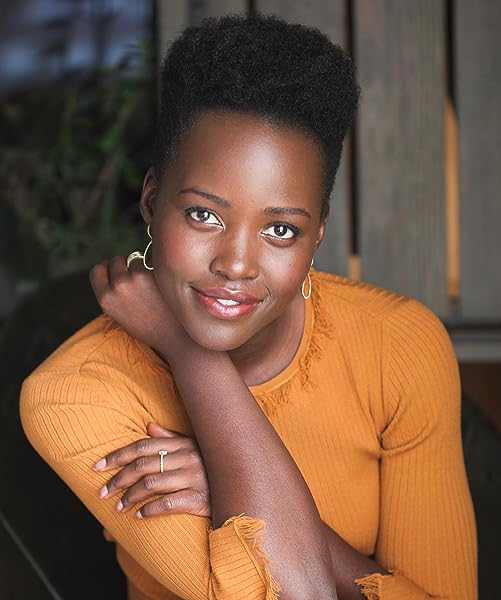 From Academy Award-winning actress Lupita Nyong'o comes a powerful, moving picture book about colourism, self-esteem and learning that true beauty comes from within.

Sulwe's skin is the colour of midnight. She's darker than everyone in her family, and everyone at school.

All she wants is to be beautiful and bright, like her mother and sister.

Then a magical journey through the night sky opens her eyes and changes everything.

In this stunning debut picture book, Lupita Nyong'o creates a whimsical and heartwarming story to inspire children to see their own unique beauty.

By turns beguiling (as when Sulwe's mother counsels her tearful daughter) and magical (a shooting star darts into Sulwe's room to share the story of Night and Day), the volume also clearly conveys that colorism is real, and it hurts. Sulwe's story confronts it head-on, with words and images that celebrate the 'dark and beautiful, bright and strong.' (Publishers Weekly, starred review)

A welcome celebration of Black girls, an important lesson for all kids (and grownups), and a necessary message for any child who has been made to feel unworthy of love on account of their looks (Booklist)

Darkest in her family, Sulwe believes that her skin makes her unattractive and prays to be lighter, but when a shooting star tells her the story of sisters Night and Day, she finally understands that she doesn't need to change. Harrison's star-flecked glimmering illustrations evoke Night's mysterious beauty. (Guardian)

Lupita Nyong'o (Author)
Lupita Nyong'o is a Kenyan actress and producer. Her first feature film role was in the film 12 Years a Slave, for which she received the Academy Award for Best Supporting Actress as well as multiple accolades, including the Screen Actors Guild® Award, the Critics' Choice Award, the Independent Spirit Award, and the NAACP Award. She has since starred in Mira Nair's Queen of Katwe, Star Wars: The Force Awakens, Ryan Coogler's record-breaking box office hit Black Panther, and most recently in Jordan's Peele's critically acclaimed horror film, Us. Nyong'o earned a Tony nomination for her Broadway debut in Danai Gurira's play Eclipsed. She lives in Brooklyn.

Vashti Harrison (Illustrator)
Vashti Harrison, author and illustrator of the bestselling Little Leaders: Bold Women in Black History, is an artist, author and filmmaker with a passion for storytelling. She earned her MFA in film and video from California Institute of the Arts, where she snuck into animation and illustration classes to learn from Disney and DreamWorks legends. There she rekindled a love for drawing and painting. Now she uses her love for both film and illustration to craft beautiful stories for children.

Amber Taylor
5つ星のうち5.0 Best childrens book I’ve ever purchased.
2019年10月17日 - (Amazon.com)
Amazonで購入
We just got the book in the mail yesterday. I had honestly forgot that I preordered it for my daughter quite a while back. We sat down and I read it to her and got choked up throughout the story. It teaches about self love, finding the light within yourselves and your true beauty. Something EVERY child needs. Heck, most adults need. It was such a beautifully captivating story that my 11 and 15 year old gathered to listen to the story too. The story is raw but easy to relate to no matter what color you are. The illustrations are the most beautiful I’ve ever seen in a book. When a 15 year old boy comments on how amazing they are...you know they’re good. This story is so needed throughout the world. I’ll be purchasing several copies to give to our local child advocacy center. You need this book. Seriously.
続きを読む
86人のお客様がこれが役に立ったと考えています
レビュー を日本語に翻訳する

Chevy
5つ星のうち5.0 Beautifully written
2019年10月16日 - (Amazon.com)
Amazonで購入
This book is beautifully written and illustrated. Little Sulwe tackles her self love and worth. Sulwe is trying to figure out “why” she is the color of midnight? This book brings up colorism in the black community. This is definitely a conversation starter in the Black home.
続きを読む

ssneed01
5つ星のうち5.0 Beautiful Story of Self-Esteem
2019年10月16日 - (Amazon.com)
Amazonで購入
I really enjoyed this book. I’m also glad that Lupita graced the world with her midnight beauty. This is a great book for all children of color ranging from day to night.
続きを読む
44人のお客様がこれが役に立ったと考えています
レビュー を日本語に翻訳する

Star Copeland
5つ星のうち5.0 A Joyful Read
2019年10月17日 - (Amazon.com)
Amazonで購入
I personally experienced this in my community I identified strongly with Sulwe. I am 72 years old, yet I still remember the pain of feeling different for my thinnest, my height and my darker complexion. My sister who was a year older with a thicker figure and a lighter complexion teased me often about it. I learned to not be upset with others since she criticized me so much! This is a great book for kids to read. The knowledge of this book will empower them!
続きを読む
40人のお客様がこれが役に立ったと考えています
レビュー を日本語に翻訳する

Alicia Elle
5つ星のうち5.0 What a beautiful read
2019年10月16日 - (Amazon.com)
Amazonで購入
What an amazing read! We love Sulwe so much! The only downside is there’s no sweet sweet Sulwe doll to hug. “I just want to hug her momma. She’s so beautiful and so sad.” Although the ending leaves Sulwe with a big gorgeous smile my daughter still has the urge to hug her! So beautiful!
続きを読む
32人のお客様がこれが役に立ったと考えています
レビュー を日本語に翻訳する
Amazon.comのカスタマーレビューを見る(230) 5つ星のうち4.8
Amazonプライム会員ならお急ぎ便、日時指定便が使い放題
さらに、映画もTV番組も見放題。200万曲が聴き放題 。クラウドに好きなだけ写真も保存可能。
> プライムを無料で試す