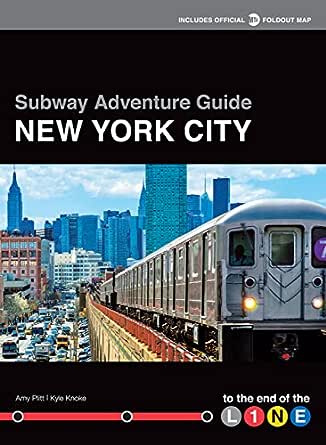 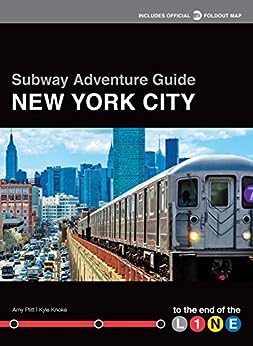 In Subway Adventure Guide: New York City, residents and tourists alike gain access to off-the-beaten-path adventures in a compact guidebook format and see the New York City that's not featured on postcards sold all over Manhattan. Each of the roughly three dozen end-of-the-line destinations spread out over New York City's five boroughs included in this easy-to-use guide, from restaurants and bars to landmarks and museums, are highlighted in great detail by authors Kyle Knoke and Amy Plitt—what to order, what to see, and how to get there. For even better exploring, each destination is organized by the more than 30 subway lines that run through the city, including handy maps with street names. From delighting in a little-known ethnic restaurant to admiring a local landmark, each adventure contained in this photo-packed pocket guide reveals a new hidden gem of the city: Van Cortlandt Park, Far Rockaway, Bay Ridge, and Flatbush Avenue, to name a few. Subway Adventure Guide: New York City takes you away from the tourist traps and closer to a genuine New York City experience.

Kyle Knoke spent several years with Kimberly-Clark Corporation serving as an account executive on various global brands before launching Allen/James Design, a full-service virtual design and communications agency. He also owned and curated Allen/Thomas Gallery—a contemporary exhibition space featuring regional and internationally emerging artists. He divides his time between New York, London, and Appleton, Wisconsin. Amy Plitt is a writer and editor whose work has appeared in Bust, Condé Nast Traveler, Foam, Mental Floss, and Rolling Stone, among others. She covered New York City news and culture for more than five years as a staff editor for Time Out New York. She lives in Brooklyn.

Rachel Kramer Bussel
5つ星のうち5.0 No matter how well you think you know New York, this book will teach you something fun (and give you a reason to visit)
2015年6月2日 - (Amazon.com)
Amazonで購入
I lived in New York for 16 years, so thought I knew a lot. But this book takes exploring the Big Apple to a whole new level. It's a mix of fascinating history with things to do that even the most in-the-new New Yorker will find of interest. It helped remind me what I love about NYC: the endlessly fascinating people and places. I also appreciate that many, if not most, of the things in this book won't cost you an arm and a leg. Even though I live in New Jersey now, I plan to use this book when I travel to New York, so that I can explore areas I've never heard of, as well as neighborhoods I've either just passed through or visited once. Art, culture, food and adventure await. This is definitely a book to savor and perfect for tourists and New Yorkers alike.
続きを読む
5人のお客様がこれが役に立ったと考えています
レビュー を日本語に翻訳する

Dwight Fong
5つ星のうち1.0 What a travel guide shouldn't be
2019年11月17日 - (Amazon.com)
Amazonで購入
Very disappointing. I thought this was a book of interesting places to visit along the New York City subway lines, but it describes in just one sentence, occasionally two sentences, sights at the start and end of each line with just one-sentence mentions of five sights in between. Addresses of the listings are not given and the bare-bones maps don't even show their names. To find the approximate location of a place you might be interested in visiting, you have to check the number of its listing in the text and then look for that number on a map. The photos are excellent, but are not captioned, so it is generally impossible to connect them with the descriptive text. This is a poor example of book-making. Everyone involved in the creation of this book -- authors, designers, editor, publisher -- needs lessons in how to produce a good travel guide. The publisher is not NYC-based -- maybe that's the problem. This book was published in 2015, so it doesnt cover the 2nd Ave. line or the extension of the F train to 34th St.
続きを読む
レビュー を日本語に翻訳する

K. Hecker
5つ星のうち5.0 Very Cool Concept
2015年5月1日 - (Amazon.com)
Amazonで購入
I have friends coming to visit NYC from out of town. I was looking for a less touristy guide for them. This is a really cool concept that I haven’t seen before. It takes a lot of the guess work out of the subway and makes it really easy to plan your destinations based on the line. The destinations are definitely more authentic than the tourist traps lots of guide books send you to. Lots of information in this book, I would even recommend it to current NY’ers who are looking to explore new parts of the city. I ordered a second copy for the coffee table.
続きを読む
7人のお客様がこれが役に立ったと考えています
レビュー を日本語に翻訳する