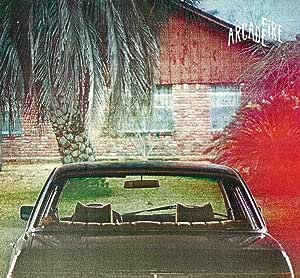 The bands latest album, entitled the Suburbs is their third outing. Frontman Win Butler's vocal lines are smoother than before and given weight by a looming sense of darkness, while co-vocalist Regine gives balance to Arcade Fire's music with an added feeling of wonder running through her work. As with their earlier material, violins, harpsichords and xylophones, among other instruments, accompany guitars and drums to add depth to a superb indie rock sound. The Suburbs features the first single the Suburbs/month of May.

The bands latest album, entitled The Suburbs is their third outing. Frontman Win Butler's vocal lines are smoother than before and given weight by a looming sense of darkness, while co-vocalist Regine gives balance to Arcade Fire's music with an added feeling of wonder running through her work. As with their earlier material, violins, harpsichords and xylophones, among other instruments, accompany guitars and drums to add depth to a superb indie rock sound. The Suburbs features the first single The Suburbs/month of May.

Andy Sweeney
5つ星のうち4.0 Very good album, but - for me - not their best work
2017年1月28日に英国でレビュー済み
Amazonで購入
Having loved Arcade Fire's debut album, Funeral, and having very much enjoyed their second album, The Neon Bible, I eagerly pre-ordered their third release, The Suburbs, and was really looking forward to hearing it. Perhaps that high expectation had an impact on my opinion of Arcade Fire's third long player, but when I first listened to the album back in 2010, I wasn't overly impressed. I quite liked it and there were a couple of songs I could tell were very good, but compared with their last two album and, especially, Funeral, my initial impression of The Suburbs was that it was a little bit underwhelming. This probably accounts for the fact that I haven't really listened to it much since its release, other than, occasionally, listening to one or two tracks that I ripped from the CD onto my iPod. I've had a quick read of professional and peer reviews and many of them seem to be highly complimentary, so I decided to listen to The Suburbs a few times, in its entirety, before committing my thoughts to print. I'm very glad that I did, because I appreciate it a whole lot more now than I did seven years ago, but it has also confirmed a few things I felt about it back in 2010 as well.

The whole album is loosely based around the Butler brothers growing up in a suburb of Houston, Texas, and was described as a “letter from the suburbs”, rather than a commentary about or love letter to where they grew up, and it starts off excellently. The Suburbs, a folky, jaunty piece with a Grant Lee Buffalo feel, is an instantly enjoyable song with some interesting, relatable lyrics and Ready To Start has a muscular rock bounce to it. The fast paced Empty Room, with its atmospheric keyboards, guitars and strings, has echoes of Funeral, but, despite sounding rather wonderful, never quite manages to grasp that elusive creative magic. There are quite a few other highlights; Half Light I is a very pretty song indeed, Suburban War begins with a gentle guitar arpeggio and builds to a thunderous conclusion and Deep Blue, with its chiming piano and excellent lyrics, is one of the very best songs on the whole album. At just over an hour long and with sixteen tracks, I can't help but wonder if The Suburbs may have made a much better album had it been trimmed down a little; there are certainly at least a couple of songs I could live without.

I believe the initial reservations I had in 2010 about The Suburbs are lasting ones. The songs are often far more conventional, far less dramatic than Funeral or Neon Bible and I felt, at the time, that Arcade Fire had embraced a more mainstream direction. I don't think I was mistaken at the time and, although I know and appreciate The Suburbs a lot more now, the primary reason why this album, as good as it is, hasn't fully captured my heart in the way their earlier work did is because it simply doesn't have the same magical feel. I often thought, as I was listening to the tracks, if this had have been on Funeral, how would it have fared alongside those wonderfully written and arranged songs? Despite this being a good, well-written album which is performed with a great deal of heart, I honestly don't think that the vast majority of these songs can hold a candle to their first release which, for me, is still their greatest moment. The Suburbs was the record that made me fall a little bit out of love with Arcade Fire and, despite appreciating it more now, in honesty, I can still hear why. It's a good album, very good in parts, but, for me, falls very much short of greatness.
続きを読む
4人のお客様がこれが役に立ったと考えています
違反を報告
レビュー を日本語に翻訳する

CrazyStreak
5つ星のうち4.0 An album burning with amusement?
2011年4月7日に英国でレビュー済み
Amazonで購入
For originality it's hard to surpass Arcade Fire with their onstage plethora of spontaneous instrumentation, and their sound is unlike no other as it's.....well, it's their own.

Having succumbed to the infectiousness of their debut album 'Funeral' and delved into their follow up 'Neon Bible' with mixed results, I didn't hold out much hope for 'The Suburbs'. Whereas the single releases from previous albums drew you into buying the album as a whole, most notably 'Wake Up' for Funeral and 'Keep the Car Running' for Neon Bible, this time, upon hearing the singles, I didn't feel any urge to hear more. It's only when you give into temptation that you realise an album can be as good as a whole without having to contain one or two 'Wake Up' moments, and this is the category 'The Suburbs' falls into.

Granted their sound might not be to everybodys taste, but this 60 minute offering puts thousands of two or three track wonder albums to shame.
続きを読む
1人のお客様がこれが役に立ったと考えています
違反を報告
レビュー を日本語に翻訳する

lynnolivant
5つ星のうち5.0 Almost flawless.
2014年7月25日に英国でレビュー済み
Amazonで購入
The vinyl packaging for this album is absolutely beautiful and the sound quality doesn't disappoint either. The vinyl release does however feature a slightly different tracklisting to the CD and digital release and if I'm quite honest, I prefer the CD/Digital tracklisting but it's really a very minor complaint. The inner sleeves are beautifully featuring what appear to be handwritten lyrics and credits and the full colour artwork on the double gatefold sleeve is truly wonderful. Probably Arcade Fire's greatest work (although Reflektor wasn't half bad), and if you like indie rock concept albums, I'd consider picking it up. It's hard to really define the genre for Arcade Fire because they get inspiration from so many different places. I'd consider listening to the songs Sprawl II (Mountains Beyond Mountains), Ready to Start, City With No Children and Half Light II (No Celebration). If you enjoy those, you're likely to enjoy the whole album and I really would consider picking it up. Also, it's 17 tracks long, so it's definitely value for money.
続きを読む
3人のお客様がこれが役に立ったと考えています
違反を報告
レビュー を日本語に翻訳する

vinceletah
5つ星のうち5.0 Designed to sit on your turntable!
2013年11月15日に英国でレビュー済み
Amazonで購入
This album is amazing, a grower I learned to love.
I am one of those who played a hundred times the first album Funeral and that is always disappointed when first listening a new Arcade Fire, like expecting the same perfection.
But, giving it time, I learned to like very much Neon Bible and learned to love The Suburbs just as well.
This is definitly a stronger album than Neon Bible in my opinion!
Now I bought it on vinyl and it is important to say that it has been mixed for vinyl, because many band use the same mix for Cd and vinyl version and that, you can hear!
It feels like a analog flawless experience! It feels like you get what you pay for when you strech the bucks to have the vinyl version!
続きを読む
1人のお客様がこれが役に立ったと考えています
違反を報告
レビュー を日本語に翻訳する

Barkersoldbean
5つ星のうち5.0 Terrific album - you will not be disappointed.
2014年7月3日に英国でレビュー済み
Amazonで購入
I confess to struggling to build a more contemporary vinyl record collection and having listened to them perform at Glastonbury bought this album "blind" immediately afterwards. This album is immensely satisfying - not one track that I didn't like and with an immense variety of styles - from folksy melodies to harder edged rock. The soundstage on the vinyl recording is superb.
Highly recommended.
続きを読む
違反を報告
レビュー を日本語に翻訳する
すべてのレビューを参照します
Amazonプライム会員ならお急ぎ便、日時指定便が使い放題
さらに、映画もTV番組も見放題。200万曲が聴き放題 。クラウドに好きなだけ写真も保存可能。
> プライムを無料で試す