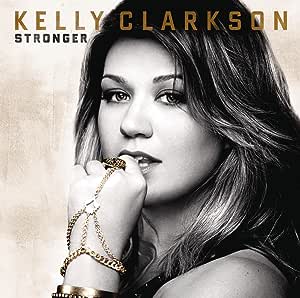 Deluxe Edition includes four bonus tracks. 2011 release, the fifth album from the international Pop icon and winner of the first ever American Idol. The vibrant, musically diverse Stronger (which Clarkson says was influenced by Tina Turner, Prince, Sheryl Crow, and Radiohead) will thrill those who love Clarkson for her resilience. Clarkson co-wrote five tracks on Stronger, a process she feels is therapeutic and the first single off the new album is "Mr. Know It All". Kelly Clarkson has sold over 20 million albums worldwide (including 10 million in the U.S.) and notching seven singles on the Top 10 on the Billboard Hot 100 chart.

食生活党
5つ星のうち5.0 Clarkson might be our next American diva!
2013年3月3日に日本でレビュー済み
Amazonで購入
She seems like a nice and easygoing singer and a person. I am fond of her music but some people might find her voice unemotional as she can sing difficult notes for ordinary pop singers quite easily. But I just enjoy her expressions so much.
続きを読む
役に立った
違反を報告
レビュー を日本語に翻訳する

Andromeda Descendent
5つ星のうち4.0 Kelly being Kelly
2012年3月15日に英国でレビュー済み
Amazonで購入
This album is so full of up-tempo songs and so short on surprises. I love Kelly's voice and whilst her songs are never the most imaginative ever to grace a record, she knows her subject matter and she does Kelly Clarkson better than anyone else trying to do Kelly Clarkson. That, to some people, could be a negative - but to me it's just some more of the type of songs I've come to love and expect from her.

The clear and standout singles from this album are put upfront for all to hear. There are some songs later on that seem to be continuations or reflections of the other ones, for example Mr Know It All has a mirror in You Can't Win, both being songs about how some people think they know someone but they really don't. There are also a few cringeworthy lyrics, never more so obvious than on the track Einstein ("dumb plus dumb equals you"... I mean, what!?).

Those headlining singles aside, there's not much in this album for those who don't already know and love Kelly Clarkson. As a fan, I'm definitely not disappointed but recognise a lack of originality here could mean others won't share my opinion.
続きを読む
1人のお客様がこれが役に立ったと考えています
違反を報告
レビュー を日本語に翻訳する

Mark Syder
5つ星のうち4.0 Another Hard Rocking Album with some Electronica thrown in
2014年5月29日に英国でレビュー済み
Amazonで購入
Another CD featuring Kelly's superb hard-rocking voice. A nice mix of rocking songs with a few more mellow ones (with the emphasis very much on the rocking songs). Dark Side is a highlight for me as is Standing In Front Of You - one of the softer songs.

Although I like every song on this disc I cannot give more than four stars - too much electronica for a five-star album and only two tracks jumped out as highlights.
続きを読む
違反を報告
レビュー を日本語に翻訳する

Mark Kaye
5つ星のうち5.0 Awesome album, If you are good at something, stick to it!!!!
2012年1月5日に英国でレビュー済み
Amazonで購入
I have just bought this album, and yet again kelly dishes out another awesome album. A two star review here on Amazon puts this album as "...same dam thing..." however Kelly is good at this, having said that though this is her 5th album, her fist, second, and forth were nothing like this. All 5 albums that Kelly has brought out is an example of excellent work, and everyone is better than the one before it, making this the best so far. Well Done, I look forward to your 6th album.
続きを読む
1人のお客様がこれが役に立ったと考えています
違反を報告
レビュー を日本語に翻訳する

Laura Flynn
5つ星のうち5.0 Fantastic
2011年11月22日に英国でレビュー済み
Amazonで購入
I bought this album as I own previous Kelly Clarkson albums. It often takes me two or three listens for me to give an honest opinion of an album but with one listen of this album, I was hooked. Fantastic album with the standout track being What doesn't kill you. I purchased the Deluxe Edition with 4 bonus tracks and I am glad I did, the extra songs mix in well with the rest of the album.
続きを読む
1人のお客様がこれが役に立ったと考えています
違反を報告
レビュー を日本語に翻訳する
すべてのレビューを参照します
Amazonプライム会員ならお急ぎ便、日時指定便が使い放題
さらに、映画もTV番組も見放題。200万曲が聴き放題 。クラウドに好きなだけ写真も保存可能。
> プライムを無料で試す