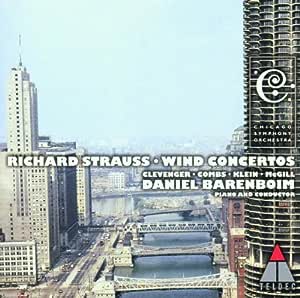 This is an enchanting record. It presents several unfamiliar but beautiful works by Richard Strauss, and it showcases the principal wind players of the Chicago Symphony, who, not surprisingly, are fabulous. Moreover, they have the benefit of an equally fabulous backup band, and the hornist even gets to play a piece with the conductor, Daniel Barenboim, at the piano.

The program begins and ends with pieces Strauss wrote as a teenager, flanking two written late in his life. The former include an Andante for horn and piano--a love song reminiscent of Wagner--two dreamy, poetic piano pieces reminiscent of Liszt, and the popular first Horn Concerto, a bravura piece written for his horn-virtuoso father. Though Strauss was still finding his voice, this work no longer seems to lean on other composers and the orchestration is already masterful. The concerto is youthfully ardent and exuberant, its second movement very lyrical and a bit melancholy, the finale a brilliant hunting call. Like the other two, late concertos, it has three connected but strongly contrasting movements. The Duet-Concertino for clarinet and bassoon has an elusive quality, but the finale is delightful, the coda a Viennese waltz. The orchestration for strings and harp is rich and luscious, with several soloists who interact with the clarinet and bassoon.

The highlight is the Oboe Concerto. Serene and romantic, it has an ecstatic, gorgeous slow movement; a brilliant, florid, rhapsodic solo part full of inventive cadenzas; and rich orchestration for a small orchestra. The neglect of this work is inexplicable. Both late pieces are so haunted by echoes of all Strauss's earlier symphonic poems and operas as to invite a game of "Name That Tune's First Cousin!" --Edith Eisler