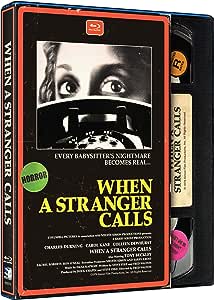 Good picture (HD) and sound (I've seen much worse at much higher prices - besides, we're not talking Citizen Kane or 2001.) Certainty much better than my DVD!

In spite of what the naysayers (most famously, Roger Ebert) might claim, When A Stranger Calls (1979) was one of the scariest horror movies from the late 1970s, in the league of fellow 'boogie man' movies Halloween (1979) and Friday the 13th (1980). It was smartly made, scary as heck and featured an effective, believable heroine who evoked so much sympathy it almost hurt. It was directed and co-written by Fred Walton (April Fool's Day) whose career only broke from the shackles of anonymous telemovies (The Stepford Husbands) with this hit. Stranger starred three of the sturdiest character actors of the day: Charles Durning (Dog Day Afternoon, Tootsie), Colleen Dewhurst and Carol Kane (Andy Kaufman's girlfriend on Taxi, The Last Detail)in the pivotal role of 'the baby sitter', a young woman harassed by a phantom phone caller as she spent her Saturday night childminding at a neighborhood house. The caller's terrifying catch cry was 'Have you checked the children?' It entered the vernacular with the same ferocity 'Shark!' did on beaches when Jaws made the scene a few years earlier. When A Stranger Calls is a dark, nihilistic and utterly terrifying movie.

It's been remade and ripped off. Skip 'em and check this out.
続きを読む

KRNRNNP
5つ星のうち5.0 HORROR CLASSIC and DELICIOUSLY TERRYFYING!!!!!
2016年6月9日 - (Amazon.com)
Amazonで購入
I saw this first soon after it came out. Not at the theater, mind you, but late one night on showtime back in the day when I was 10 or 11 years old. WHY in the world my parents allowed that is beyond me but suffice it to say...I never did babysit much after that. Yes. It's THAT scary and THAT good. Now in my 40's I still WILL NOT watch it alone. I can watch the Halloween movies, Friday the 13th series, and many other "scary" movies alone - but this takes horror to a whole other level for 2 main reasons:

1.) it could actually happen and,
2.) it is based on suspense. No blood, no gore, just sheer terrifying suspense.

The two above elements IMO, make anything 100x scarier.
I won't go on and on (as others have) - and I won't be a b!**h and tell you the plot and the ending (like others here do), just trust me and promise to watch it WITH someone else, AND don't show it to an impressionable preteen or you will NEVER get her to babysit....not for ANY amount of $ 😄😳
続きを読む
13人のお客様がこれが役に立ったと考えています
レビュー を日本語に翻訳する

Jill Johnson(CAROL KANE) is the baby sitter for the Mondracas family. The two children are already in bed and the Dr. and Mrs. Mondracas leave for a night out. Jill gets intermittent phone calls when the eerie voice saying..."have you checked the children?" As Jill studies the phone calls continue. As she becomes more scared Jill calls the police..... a trace is made by the local police and later finds the call are coming from inside the house.....*spoiler* ......of course the police arrive as Jill races out the door and the Killer /Curt Duncan is drug away and found he killed the children in cold blood. 7 years later after being found insane he is able to escape the state asylum. Then ex policeman Charles Durning is hired to track him down and "finish him off". Duncan tries to pick up Tracy (excellent Coleen Dewhurst) in a bar and Durning is able to use Tracy as bait to get closer to Duncan. Until a photo in a paper again leads Duncan to Jill now married with children of her own. This is excellent from the first completely scary 30 minutes of terror....to the tracking down of Duncan to the superb ending of the plot. this holds up over time co written and directed by the great Fred Walton. At times the gloom of night is not only scary but visually stunning and ass to the great visual scares of the movie.
続きを読む
1人のお客様がこれが役に立ったと考えています
レビュー を日本語に翻訳する

Wauline J Quick
5つ星のうち3.0 Unexpected Terror
2019年12月16日 - (Amazon.com)
Amazonで購入
It's a good movie. When I first viewed it and when the Policeman states "the call is coming from inside the house" my hair stood right up. It was very unpredictable, and scarey. I can see how that could happen to anyone. What was
never made clear is why this man was not returned to England. He was not a citizen of the U.S. Why does he become America's problem financially, and yet it appears he does. It states in the movie he got on the ship with a seamen's card from England. He should have been shipped back "It would have saved Lives". No connection with the remake.
続きを読む
レビュー を日本語に翻訳する

Azzan
5つ星のうち5.0 When a Stranger Calls...Don't Replay His Message
2015年11月27日 - (Amazon.com)
Amazonで購入
The original shows that such an encounter could happen to anyone, anywhere. The remake? Just uses it as a gimmick. Instead of dwelling on Jill Johnson (Carol Kane) being shaken by her frightening encounter with the stranger who calls, gears are shifted. We see Detective John Clifford (Charles Durning) tailing the stranger in question, Curt Duncan (Tony Beckley). Then at the climax, we come back to Jill who, unlike today's horror protagonists, has moved on and up. The stranger just happens to interrupt her life, shaking her up again. Unlike the remake, this chilling story is not confined to one night, and shows that Jill is not necessarily the "destined" receiver of some stranger's treachery. As a bonus, Kane's Jill is not broken down before the frights, in contrast to the tuneless model-like Jill in the remake. Main point: The original film beats the remake any day.
続きを読む
2人のお客様がこれが役に立ったと考えています
レビュー を日本語に翻訳する
Amazon.comのカスタマーレビューを見る(213) 5つ星のうち4.4
Amazonプライム会員ならお急ぎ便、日時指定便が使い放題
さらに、映画もTV番組も見放題。200万曲が聴き放題 。クラウドに好きなだけ写真も保存可能。
> プライムを無料で試す