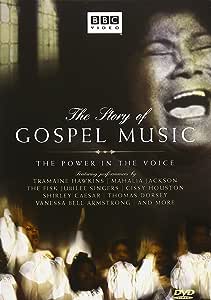 The Good News is abundant throughout The Story of Gospel Music, an absorbing, BBC-produced look at the past and present of this vibrant black American music. Gospel, a joyous sound that's both viscerally and spiritually uplifting, has been around for centuries, so it's no easy task to provide an overview in a mere 90 minutes; indeed, many of the artists featured here are deserving of (and some, in fact, have) entire documentaries of their own. But the producers of The Story of Gospel Music have done a creditable job of it, by way of the usual parade of talking heads (many are highly entertaining and informative, but oddly, and annoyingly, nary a one of them is identified), music excerpts, and film clips. A reasonably thorough history is offered, including gospel's African and English origins, the development of the call and response tradition (still readily apparent in rap music today), the inevitable co-opting and dilution of the music by whites, etc. There are also segments devoted to various gospel legends, including Thomas Dorsey, Rev, James Cleveland, and the amazing Sister Rosetta Tharpe, a superb guitarist who, like others before and since (cf. Louis Armstrong, Ray Charles, and Aretha Franklin), played music that was both sanctified and "satanic" (i.e., jazz and blues) throughout her career. As is the case with so many products of this kind, the brevity of the musical performances is disappointing. However, this one has a saving grace, so to speak, in the form of two lengthy performances found in the bonus material, one a recital by the great Mahalia Jackson (from '64), and the other a British television appearance by Shirley Caesar (from '84). --Sam Graham

These legendary voices bring their power to the Almighty as they trace and deliver the story of the music that refreshes the spirit and redeems the soul-from West Africa to urban America. Enjoy clips of Mahalia Jackson, Aretha Franklin, Thomas A. Dorsey, Tramaine Hawkins, Reverend James Cleveland, Shirley Caesar and other gospel immortals! 1996/color/90 min/NR.

markdipsw
5つ星のうち5.0 Wonderful Gospel music
2015年4月15日に英国でレビュー済み
Amazonで購入
Wonderful wonderful wonderful and so moving. I am a great fan of jazz, blues and especially Gospel and now I understand why black Americans sing how they sing and why their churches are full when others grow empty. The sufferings culminated in this great music. I would go to a black American church just for the music. If there were churches in Scotland where I could hear this music live I would go every Sunday (and I don't even go to church!!!!!!)
続きを読む
違反を報告
レビュー を日本語に翻訳する

william ettinger
5つ星のうち5.0 love it
2013年5月3日にカナダでレビュー済み
Amazonで購入
it was wonderful i have watched it several times and plan to watch it when i need that extra kick
続きを読む
1人のお客様がこれが役に立ったと考えています
違反を報告
レビュー を日本語に翻訳する

C. Wright
5つ星のうち3.0 Where's the Beef? Great info, but too brainy.
2007年12月5日にアメリカ合衆国でレビュー済み
Amazonで購入
This documentary from BBC was excellent and thorough in terms of research, especially the history of music during the slave days, but the parade of talking heads (who seem to finish each other's line of dialogue ...was this pre-scripted?) got old and dry. I don't even remember that they noted who the experts were.

Some of the experts were musicians and church folks, but none spoke with the fire contained in the music. The music selections were way too short, and just when I'd start to be inspired, they moved along to another segment. The most moving parts contained some clips from "Say Amen Somebody," the tribute to Thomas Dorsey, but even here they snipped them short. If you want to crawl under the skin of this music and those who pioneered it, get "Say Amen Somebody." If you love this music, view SAS, then this documentary, then run back to view "Say Amen Somebody."

cruiser
5つ星のうち5.0 Story of Gospel Music
2012年5月23日にアメリカ合衆国でレビュー済み
Amazonで購入
I really enjoyed this gospel music story...Thomas Dorsey helped change the deliverance and message in gospel music,thank you Mr Dorsey for such inspiring and anointed songs...I especially liked AMAZING GRACE song by Tramaine Hawkins...that song really is the Negro national anthem and the song AIN'T BUT ME ONE is just too cute... hearing the song SENDING UP MY TIMBER gave me chills... good history and information...good dvd
続きを読む
3人のお客様がこれが役に立ったと考えています
違反を報告
レビュー を日本語に翻訳する