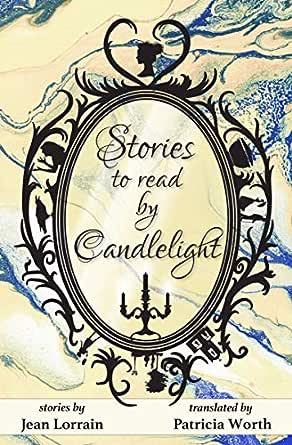 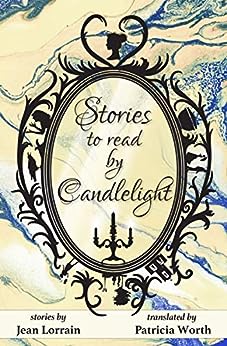 Stories to Read by Candlelight contains eight stories first published in the 1890s by the French author, Jean Lorrain, translated here into English by Patricia Worth. Jean draws the reader back in time to his provincial childhood when his grandmother’s seamstress would tell him stories that gave him goose bumps and made him jump under the covers. Here he recounts these same stories, or invents new half-lived half-dreamed stories born of objects found in an attic or an old house. The characters have a mythical quality, whether they be fantastical beings who long to be real, like the embroidered Princess Mandosiane, or real people like Madame Gorgibus, accused of being a wicked fairy. The stories fall between legends and fairy tales, a genre favoured by a few Decadent authors protesting against realism and regretting technological progress.

Shell
5つ星のうち5.0 A delightful collection of stories
2019年10月5日 - (Amazon.com)
This is my first time reading a translated work and I was hooked from the opening introduction. It has a wonderful sense of nostalgia as it tells of stories from the author’s childhood, some of them eerie and disturbing, others whimsical or cautionary. I loved the parts where Jean Lorrain explained each story and how it affected him as a small boy and could clearly picture him watching on as his family’s seamstress regaled them with fantastical tales that made him shiver. Stories that would resonate with him long into adulthood.
I also loved the glimpses it gave into provincial life in France so many years ago, and the roles the servants played in the lives of their employers. This helped to bring the stories to life, painting vivid pictures as I read each one and transporting me back in time. As a translated work, it was a seamless read that was packed with charm and otherworldly beings, creating a delightful collection that was a perfect way to spend a few hours.

Mary
5つ星のうち3.0 Gothic tales.
2019年12月28日 - (Amazon.com)
Thank you Henry Roi for sending me a copy of this book for an honest review. All thoughts and opinions are my own.

Stories to Read by Candlelight are stories told to Jean Lorrain during his childhood by his grandmother’s seamstress in the 1800s. These stories to me felt kinda Grimm fairy tale-esque. I enjoyed these tales but I did not find them as “scary” as the author did when he was remembering them. The stories were entertaining in the respect that they felt like old fairy tales, but for me, that is all. I enjoyed them for what they were but I do not see myself seeking them out to reread later.

If you enjoy old tales you will enjoy these 8 stories.

Zoë C. Fox
5つ星のうち5.0 Delightful look into the gothic stories of Belle Epoque era childhood
2019年11月28日 - (Amazon.com)
"Stories to Tell by Candlelight", by Jean Lorrain and translated by Patricia Worth, is a delightful look into the gothic stories that accompanied childhood in the Belle Epoque. Being a translation of a book written as a recounting of tales from the original author's childhood, I was very impressed with the translator's ability to maintain the different narrative voices in period accurate language without leaving the reader feeling as if something has been lost from the source materials.
While Lorrain himself, in his introduction, demonstrates both an affection and a bit of intellectual disdain for the spinster Norine who passed along many of the tales to him as a child, it is Nornie herself who truly comes alive, despite now being a third hand source to the reader.
Norine, who handled mending for Lorrain's family, told tales to sick children of vindictive ravens ready to pick out their mistress's eyes and of the beautiful 600 year old fabric princess who wanted to go out into the world, but died for her misplaced trust. Despite being separated by centuries, I couldn't help but see the similarities between the tales Norine told and "The Scary Stories to Tell in the Dark" my generation loved to terrify ourselves with. One can imagine the shadows cast on the sickroom wall played with the young authors feverish brain the same way those stark black and white drawings haunted and thrilled us.
As a writer of historical fiction and a lover of both the 1800's and all things marcarbe, I deeply enjoyed reading this, but also benefited for it's addition to my reference library. Both the ghostly voice of the author and Norine echo down through the years with such clarity, him dersive and clever, her breathless and already in life a representative of a dead era, that I feel our spectral encounter has better rounded my ability to write more precise, historically accurate dialogue that isn't dusted with the dullness as many think of the time period, which in all actuality, despite Victorian stuffiness, was known for its interest in the occult, romantic walks in the graveyard, and a lot more "scandalous" behavior such as erotica collections, known homosexuality, and more.
A must read for anyone who loves vineggettes into the gothica of passed generations.
Worth is a skilled translator, of which there is no doubt. As a lover of French stories whose ability to read the language is grade school level at best, I will be seeking out both past and future translations handled by Worth's talented hand.