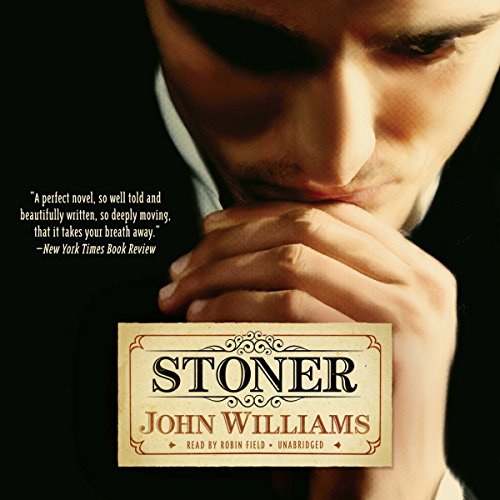 そしてインタビュアーが最後に、”And literature is written to be entertaining?" と念を押したのに対して、作家はこう答えている。
”Absolutely. My God, to read without joy is stupid."

Williams, through the unassuming and seemingly passionless and passive character of Stoner, paints a convincing portrait of a man who tries to find his place in the world. He wins some, and loses others in the process, as life deems fit to give or take from him. Quite early on in the novel, in his early days when he had quite fortuitously found a niche in the academic life at a university, his friend David Masters makes quite an accurate if unsolicited assessment of his personality and motivations: "you are the dreamer, the madman in a madder world, our own midwestern Don Quixote without his Sancho, gamboling under the blue sky.... but you have the taint, the old infirmity.... You, too, are cut out for failure; not that you'd fight the world. You'd let it chew you up and spit you out, and you'd lie there wondering what was wrong."

In many ways, Stoner fulfils Masters's grim prophecy, but Williams paints Stoner with much empathy and we find ourselves cheering him on when he escapes certain fate as a farmhand to carve out a respectable if unremarkable career as a literature tutor at the university where he had originally gone for agricultural studies. It is the one time we see Stoner take control of his life with some passion. When he marries Edith, a girl he meets serendipitously at a hoary professor's party, we hold our breaths at how the marriage would pan out, with his uncertain nature and her ice-cold and suspiciously vacuous veneer. We feel pangs of both delight and sorrow when we see his unexpected joy at fatherhood and the way that joy is eroded by his own possessive and malicious wife. But even that is an oversimplification of the complex nature of what Stoner goes through, because the strength of Williams's writing is his nuancing. There is no easy distinction between good and nasty characters, or clearcut happiness and sadness.

The novel too, is also emblematic of its time. Stoner's life is bookended by two world wars and he is as much affected by them as the men and women of his time. His perspective of death as a young man is shaped by the war when it touches his own peers: "When he had thought of death before, he had thought of it either as a literary event or as the slow, quiet attrition of time against imperfect flesh. He had not thought of it as the explosion of violence upon a battlefield, as the gush of blood from the ruptured throat".

This is a very satisfying novel which moved me with its reposeful tone and simple yet exemplary prose. I am glad it found success, albeit belatedly after Williams's death. Definitely a worthy masterpiece.
続きを読む
41人のお客様がこれが役に立ったと考えています
違反を報告
レビュー を日本語に翻訳する

CASSINI24
5つ星のうち4.0 Overhyped, but nevertherless beautiful and melancholy tale of an undistinguished life
2020年2月12日に英国でレビュー済み
Amazonで購入
It was bound to be difficult for this eloquent and touching novel to live up to the extraordinary hype surrounding its rediscovery by a new generation of readers. But this tale of the undistinguished life of a Literature teacher at a mid-Western university between the two world wars is strangely poignant. It is written in a very linear, chronological style - no acrobatic narrative techniques here, and is all the better for it.

William Stoner passes through all the usual milestones during his life - adolescence, the discovery of literature, love, parenthood, infidelity, career success and failure, and ill health, and he does so with a sense of both passivity and despair. The wider world intrudes into his private world on occasion - the loss of friends to war, the Great depression - but he rarely intrudes upon the wider world.

The repressed marital battles between Stoner and his wife Edith are superbly described, and are mirrored in the academic battles with Lomax, his nemesis at the university.

I can see the wider appeal of this book - it deals with universal emotions and life experiences, and I think every reader will feel some empathy with the main characters, even if they are not deserving of much sympathy.
続きを読む
5人のお客様がこれが役に立ったと考えています
違反を報告
レビュー を日本語に翻訳する

George
5つ星のうち5.0 Unusual, incomplete but compelling and dark
2018年11月11日に英国でレビュー済み
Amazonで購入
I've not read fiction for some time. And this book kind of entered my life and darkened it with a malevolent presence, which I'm hoping will slowly pass to leave some clarity and insight into the human condition.

It doesn't stick to the format of a 'standard' fiction book, but rather is trying to convey something of how the mind works and the story is only there to help the explanation of this, rather than in its own right.

This book is not for most people I guess. I think there are parts that are either unintelligible or lack meaning; I'm not sure which.

However, the story, in its whole telling, covering one man's life in its entirety, has something to half-say and to stimulate thought about.  About the forces that drive life along, that shape life, and the impotency that most of us are blind to. About the ignorance that envelopes our choices and our inability to fathom most of what happens to and around us.
続きを読む
9人のお客様がこれが役に立ったと考えています
違反を報告
レビュー を日本語に翻訳する

Paul Grump
5つ星のうち5.0 A most wonderful book
2016年11月26日に英国でレビュー済み
Amazonで購入
A masterpiece of wonderful writing and wisdom. A work of genius that should be read by everyone. I can't imagine that I will ever find a book that I will enjoy as much as this one. So I will read it all over again, starting right now.
続きを読む
27人のお客様がこれが役に立ったと考えています
違反を報告
レビュー を日本語に翻訳する

Dionysus
5つ星のうち5.0 The paths of glory lead but to the grave
2019年10月28日に英国でレビュー済み
Amazonで購入
With so many reviews, I wonder whether it is possible to write anything that has not been written already. One of the characters in this book quotes from Grey's Elegy in a country graveyard "... not born to blush unseen and waste his sweetness on the desert air" in passing. I knew I'd seen that phrase before and I went and reread the whole poem. For me this novel seems to be about an obscure life like those commemorated by Gray.

There is not much that is remarkable about the life and character of William Stoner but John Williams writes so beguilingly that you feel really taken up with his life and experiences.

I was especially taken with his description of Stoner's unfulfilled marriage. Some of it had resonances of a number of marriages I have witnessed among friends. I felt especially sorry for their daughter Grace caught in the middle of it all.

When I finished it, I just wanted to read it again.