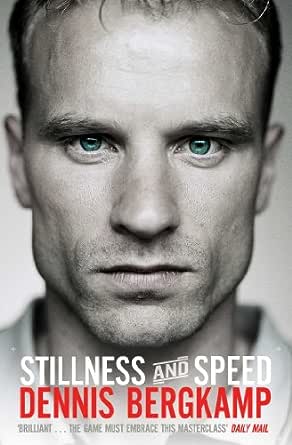 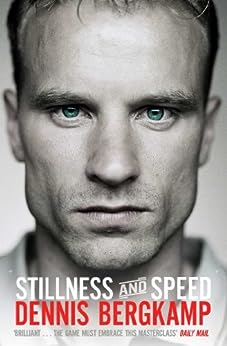 Born in Amsterdam in 1969, Dennis Bergkamp began his hugely successful career at Ajax, before moving to Inter Milan and then on to Arsenal in 1995, where he was a central figure in the side that won three league titles and four FA Cups. He also won 79 caps for the Netherlands. He is currently assistant manager at Ajax. --このテキストは、hardcover版に関連付けられています。

The 90's Guy
5つ星のうち5.0 A Fascinating Read On A Dutch Master
2015年10月7日に英国でレビュー済み
Amazonで購入
(WARNING: The review of this book may or more likely will contain spoilers!)

Dennis Bergkamp is a name that will be forever be synonymous with football technical brilliance. His scoring of goals; his creation of chances; and his overall vision towards the game won him many admirers throughout his playing career. If the man even so much as flicked the big toe on his right foot, it would give football pundits orgasms lasting several weeks. But why does Dennis think and operate the way he does with football? This book “Stillness & Speed” gives the reader a great insight into the man who thoroughly deserves his descriptive title of “Dutch Master.”

Strictly speaking this isn’t a biography or autobiography. It’s more of an interview book where the writer asks various questions about Bergkamp’s football career. He talks about his thinking when creating chances and goals both for himself and his teammates; his attitude towards training and his need to go the extra mile to “get it right”; and his precise views on various aspects of the game which includes taking penalties. Overall the book was a real eye-opener for me. Yes, we have various football pundits breaking down the action on a daily basis. Yes, we have Sky Sports and their bottomless cup of computer graphic analysis. But this book really opened my eyes has to how much depth there is in the game of football, and what needs to be learned and perfected in order to get really good at it. I was compelled to just keep reading, and that can only be a good thing.

“Stillness & Speed” is not just an educational experience (I would venture to say). It’s also a series of mini stories providing an interesting view on the different styles of football play throughout Europe. The book talks about Dennis establishing his skills in the technical world of Dutch football at Ajax; his struggles physically and mentally with the defensive Italian style at Inter Milan; and his revival in the open and attacking arena of English football with Arsenal. Among the famous football faces consistently praising Bergkamp’s skill and personality are former Arsenal players, Ian Wright and Thierry Henry, and the current Arsenal manager, Arsene Wenger. There’s even a bit of time for some short-tugging humour. Trust me you’ll know what I mean when you read it!

This is just my opinion -make of it what you will- but having read through this book from start to finish, it has made me realise that...it’s OK to be a perfectionist. It’s OK to not be happy with your current results and performances, and want it to be better. It’s OK to constantly want to strive for more and get out there to make it happen. It’s OK to want to be...perfect. One thing it certainly is...it’s an in-writing motivational speech to work hard to get the results you want.

Even if you don’t agree with those opinions in the last paragraph, the insight to Bergkamp’s mindset on the field of play and his general football philosophies make “Stillness & Speed” a compelling read. It’s a series of educational lessons on football and life. The bottom line is if you love your football, you’ll love this book.
続きを読む
5人のお客様がこれが役に立ったと考えています
違反を報告
レビュー を日本語に翻訳する

History Geek
5つ星のうち5.0 Not an traditional autobiography - but still a good read
2013年12月19日に英国でレビュー済み
Amazonで購入
Dennis Bergkamp's autobiography isn't like most football autobiographies. In truth, it isn't really an autobiography! In my mind, it's an authorised biography, not an autobiography. The co-writer has the main 'voice' and Dennis' input - which, admittedly, is substantial - is in the form of extended quotations taken from interviews with the co-writer. Effectively, it makes the book a long magazine-style interview of Bergkamp.

However, that apart, it's still a great and analytical read that probably works well for somebody who had a great playing career but perhaps doesn't have the big, gregarious personality we often associate with great sport autobiographies. There's plenty of input from others involved in his career at Ajax, Inter and Arsenal, and the co-writer seems to understand Bergkamp's career and get down to the key issues - the strife at Ajax, Bergkamp's unhappiness at Inter, the reasons for Arsenal's success.

A couple of quibbles about the Kindle edition - the version that I downloaded was missing a cover image and had a surprising amount of typos that got through proof-reading.
続きを読む
1人のお客様がこれが役に立ったと考えています
違反を報告
レビュー を日本語に翻訳する

Nick Butler
5つ星のうち5.0 Excellent
2020年2月20日に英国でレビュー済み
Amazonで購入
Talking about players and not football managers this is the best football autobiography I have read. Life lessons include Dennis always wanted to be the best at everything he tried. For example when not on football duty he always dressed very smartly. That's what disciplined people do. They work hard of the details of life. A fantastic role model for anyone.
続きを読む
違反を報告
レビュー を日本語に翻訳する

lynneeb
5つ星のうち5.0 Surprisingly funny
2013年11月29日に英国でレビュー済み
Amazonで購入
I love football and have the good fortune of supporting a lowly team, allowing me to be fickle about the more skillful and successful teams I follow and enjoy watching. Like many other neutrals and lovers of football - Arsenal during Berkhamps' reigh was the team to follow - my reason for reading this book.

I very much enjoyed the style, and thought the interview style worked well. I particularly enjoyed the backwards and forwards commentary of the same event, providing insight and different perspectives and how this linked to the narrative of Berkhamps life. At the end of the book I felt I had a really good understanding of some of the politics of Ajax, Dutch and Italian football and a balanced view of Berkhamp as both a player and man.

My surprise was though how really funny the book is. For the first time in a long time I had to interupt people around me and read passages out loud - I just had to share my amusement. The story of how he first met Ian Wright - just so well written and funny. The interview with Johann Cruyff when he was asked about current decision making at Ajax - just brilliant. You could imagine a stand up comic narrating this interview to great humour.

I have become a total bore now when watching football on TV - just talking angles, distances and space. I only hope all members of the current FA commission read this book - what lessons to be learnt.

highly recommend to any one interested in sport. My only regret? Wished I have purchased in hardback - definitely one of those books to dip in and out of at your leisure
続きを読む
1人のお客様がこれが役に立ったと考えています
違反を報告
レビュー を日本語に翻訳する

John McGovern
5つ星のうち5.0 The Story of the best Dutch Footballer of the Nineties and early noughties.
2018年1月8日に英国でレビュー済み
Amazonで購入
A right riveting read, Bergkamp was probably one of the best players in the Premier Greed League.And without doubt one of the best to come from overseas,easily in the top three.This is a lovely book,funny in parts, i am not a 'Gooner'[Arsenal fan],this is a book for all football fans,except for Manchester United's who would have liked more photos and more mentions of their team[go and buy the Man Ure annual then!]Dennis Bergkamp,different class.
続きを読む
1人のお客様がこれが役に立ったと考えています
違反を報告
レビュー を日本語に翻訳する
すべてのレビューを参照します
click to open popover
Amazonプライム会員ならお急ぎ便、日時指定便が使い放題
さらに、映画もTV番組も見放題。200万曲が聴き放題 。クラウドに好きなだけ写真も保存可能。
> プライムを無料で試す