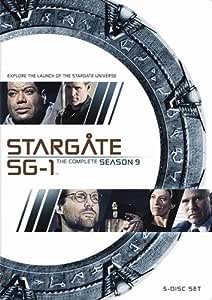 Stargate SG-1 soldiers on with this five-disc, 20-episode set from the sturdy franchise's ninth season (2005-06), incorporating numerous changes while continuing to distinguish itself as one of the television's best sci-fi shows. Longtime star Richard Dean Anderson makes only brief cameos these days, after seven seasons as Lieutenant Colonel and one as Brigadier General Jack O'Neill. Stalwarts Amanda Tapping, Christopher Judge, and Michael Shanks (as Samantha Carter, Teal'c, and Daniel Jackson, respectively), are still on hand, but with Season 9, Ben Browder (known to many genre fans for his lead role in the excellent Farscape series) takes over as leader of SG-1, the Stargate project's ace team in the field. As Lt. Col. Cameron Mitchell, Browder effectively projects the same kind of cocky irreverence that was Anderson's trademark, but he has a ways to go before he fully equals the latter's appeal. More engaging is fellow Farscape alum Claudia Black as Vala (Daniel Jackson's one-time love interest and a vixen, thief, and liar who becomes an integral part of the team during the several episodes in which she appears), while Beau Bridges is capable but uninspiring as Major General Hank Landry, who runs the show back on Earth.

Then there are the bad guys. With longtime nemeses the Goa'uld having essentially been eliminated, we now have the Ori, whose agenda of domination through religion provides the season's principal story arc. They're certainly a timely addition. With their "Book of Origin," rejection of free will, and goal of subduing all heretics and "unbelievers," the Ori resemble extreme fundamentalists of various stripes; on the other hand, when the U.S. military talks about crusades and "ridding the galaxy of evildoers," parallels to the Bush administration's war on terror are obvious and unavoidable. Problem is, while we know that the Ori are relentless, devious, and bloated with the pride that always attaches itself to false gods, we can't actually see them. They have semi-human apostles, called Priors, who spread "enlightenment" and bad mojo (not to mention plagues of carnivorous bugs) all over the universe. They have mighty ships that that leave the good guys in dire straits in the climactic battle that ends the season (typically, little is resolved, leaving viewers to salivate for Season 10). But the Ori themselves are kin to the all-knowing Ancients, who exist not in recognizable physical form but as energy; unlike previous villains, from the Goa'uld to the Replicators to Stargate Atlantis' Wraith, when it comes to the Ori, there's no there there. Meanwhile, the writers' replacement of the ancient Egyptian iconography used in earlier seasons with various aspects of Arthurian legend (Merlin, Knights of the Round Table, sword in the stone) is sometimes cool, sometimes merely hokey.

The Stargate is an intergalactic gateway, developed by an ancient civilization, that links other planets from other solar systems to ours. The U.S. Air Force assembles a Stargate team for interstellar peace-keeping missions. Boasting incredible special effects sequences, rapid-fire pacing and awesome scenes of alien warfare, STARGATE SG-1 is your gateway to pulse-pounding, sci-fi action!

DustyDog
5つ星のうち4.0 Fantastic
2018年10月7日に英国でレビュー済み
Amazonで購入
Stargate SG1 the best Sufi show of all time. I loved this series so much i ended up collecting all 10 seasons and the films. In short it’s a team of Americans travelling to different planets to collect technology, meet new friends and makeing enemies along the way. It’s time to save our planit again.

Cons
Dvd quality
You will get hooked

imoteph
5つ星のうち5.0 Good value.
2019年11月10日に英国でレビュー済み
Amazonで購入
Had several of the series already and wanted to add to them. This is getting to the end but I am a fan so I wanted to get them all. Not as good as when the originals were in but watchable.
続きを読む
役に立った
フィードバックを送信中...
フィードバックをお寄せいただきありがとうございます。
申し訳ありませんが、お客様の投票の記録に失敗しました。もう一度試してください。
違反を報告
レビュー を日本語に翻訳する

The ninth season of SG-1 sees our guys heading down a bold new path. In a neat twist to real life, with the discovery of Atlantis, much of SG-1's budget has gone to the new expedition. (Unfortunately, this was also the case behind the cameras. Many of the episodes are earthbound, but when the effects are used, as in the season finale, all I can say is Wow.) Daniel, Sam and Teal'c have moved on to other projects, as has Jack, now succeeding Hammond at Washington. Command of the base has been given to General Landry, who receives Colonel Cam Mitchell("Mitch") as the new team leader of SG-1, at Jack's request. Cam's back story is that he was a pilot in the season 7 finale "Hidden City" during the battle with Anubis,and being decorated for valour, was promised any assignment, and chose this.
This season also introduces the new bad guys, the Ori, bent on domination using their Priors as missionaries. Although the season takes a while to kick in, due to the inevitable reset required to establish the new team, it's still an engaging romp, with Ben Browder as Mitchell capably stepping into Jack's shoes. Claudia Black also returns as Vala Mal Doran, and although the sparks are between her and Daniel, rather than Mitch, which would have neatly mirrored their previous roles on "Farscape", there's still some great one liners, excellent SFX and continuing plot lines. As mentioned above, the season finale is excellent, and sets up Season 10 neatly, which would prove to be the last, as we are now promised straight to DVD movies.
All in all, a very good reset for the long running franchise. The new themes are engaging and Browder and Black fit seamlessly into the family. Roll on Season 10 and the movies!
続きを読む
役に立った
フィードバックを送信中...
フィードバックをお寄せいただきありがとうございます。
申し訳ありませんが、お客様の投票の記録に失敗しました。もう一度試してください。
違反を報告
レビュー を日本語に翻訳する

Gater
5つ星のうち4.0 Stargate Season 9
2012年8月27日に英国でレビュー済み
Amazonで購入
I really enjoyed season 9. It was somewhat strange with new the new guy Mitchell taking over the reigns from Jack o' Neil. I think I would have enjoyed a much better send off for Richard Dean Anderson.

Some of the changes were so overwhelming. Carter was initially not involved, apparently assigned to Area 51, Then there is the mischievous but intriguing Vala. Plus the departure from the Egyptian mythology to the Medieval King Arthur mytho. Then the new bad guys, the Ori, what an interesting change, but it did not feel like the Stargate I had come to love.

But they did it again, I was won over and again found myself wanting for more, in fact despite my attempts to apply a certain reserve I finished watching the whole season within a week. The quality has not only been sustained, but actually gradually improved throughout the season. The season ends off with again a spectacular cliff-hanger which really impressed me.

And then off course I did not have season 10 as yet, to see the conclusion to the seemingly devastating invasion at the end of season 9, I highly recommend for you to have the season 10 on hand to avoid screaming at the top of your voice like a 6 year old girl when the credits come up.

Thankfully we did see a Jack o' Neil cameo at the beginning of the season and I also happy to again see General Hammond, the late actor Don S. Davis in cameo appearance. It sort of created the impression that their lives continued on even outside the SGC. And it was good then to see Carter come back and the team felt more whole again. Plus Mitchell grows on you. He does bring that familiar Jack o' Neil humor, though not quite the same, still very good.