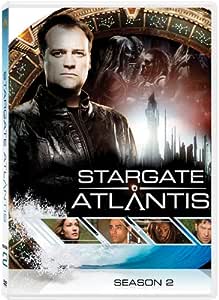 If Stargate Atlantis isn't the coolest sci-fi series on television, this five-disc, 20-episode box set from the second season (2005-06) offers ample evidence that it's right up there. The writing is good; the stories are intriguing, and the science part of the equation is credible enough to justify our suspension of disbelief. The characters are for the most part well-defined, and the acting, while perhaps not Emmy-caliber, is just fine. The action is exciting, the effects work impressive, the costumes and sets first-rate. But what Atlantis really has going for it is the presence of some of the baddest bad guys in the cosmos: the Wraith.

With their flowing white locks, cat-like eyes, pale, almost translucent skin, and teeth so bad they'd make the British blush, the Wraith rock. They also have a constant need to feed--on humans, of course--and are a serious threat not only to Atlantis but to the entire known universe, including good ol' Earth. And although there are occasional diversions, the producers and writers have wisely kept the focus on these implacable antagonists; in fact, the newest member of the team, one Ronon Dex (played by the dreadlocked and hunky Jason Momoa), is a "runner" who escaped the Wraith's clutches, was a fugitive for years before being found by our heroes, and specializes in dispatching the villains with cold precision. In the course of the season, via single episodes and several multi-parters, the Stargate team, commanded by Dr. Elizabeth Weir (Torri Higginson in the show's least interesting role) and led by insouciant Major John Sheppard (Joe Flanigan), with genius-neurotic Dr. Rodney McKay (David Hewlett) handling the scientific intricacies and yet another doc, Carson Beckett (Paul McGillion, affecting a Scottish brogue), overseeing medical matters, deals with the enemy on many fronts. Lt. Ford (Rainbow Sun Francks) defects after assuming Wraith-like characteristics. The team experiments with a "retrovirus" designed to turn Wraiths into humans (the results are decidedly mixed). They encounter a human who raised a Wraith female from childhood and insists she's just like us (she's not). They're captured and imprisoned on a Wraith "hive" ship. And in the final episode, the humans and the Wraiths even form an alliance of supposedly mutual convenience (the episode is a cliffhanger that awaits resolution until Season Three, but anyone who thought this "partnership" was a good idea for our side clearly hasn't been paying attention). As was the case with the Season One set, bonus materials are generous, including audio commentary (by actors, directors, and others) on every episode, various featurettes, photos, and more. Now if only there were a few Wraith interviews... --Sam Graham

Hear How Beckett's Character Developed in this Exclusive Clip

Imagine Stargate Atlantis without Dr. Carson Beckett... finding it difficult?
After several screen-tests, the creators of the show did too, listen to them
tell you why Beckett became the prominent character that he is in Season Two.

Mole
5つ星のうち5.0 A great box set
2012年8月23日に英国でレビュー済み
Amazonで購入
Season 2 of Atlantis set out to build on the first season; and it certainly achieved that. The actors were comfortable in their roles, the writers were coming up with good concepts, great scripts and the directors were making the whole thing very slick.

There had been a feeling that they wanted Atlantis to stand out from SG-1 as a completely separate entity; and it does that quite well. However, they also decided to provide some more regular links back to Earth and this alters the dynamic slightly; but it is clear that Atlantis is not just an SG-1 "wannabe". It is a full concept in it's own right and has it's own specific foibles and quirks.

The war with the wraith continues, and takes a slightly odd turn with the episode "Michael" featuring Connor Trineer from "Star Trek Enterprise". But most of the epsiodes of this season are really good and most are well worth watching more than once.

A slight change in personnel; Ford leaves in a slightly odd manner, but they gain a new team member in Ronan Dex. At first, I wasn't too sure about him, but later felt that he was interesting in that he clearly has a key back story that has not been fully revealed.

As always, they provide some really great bonus material on the DVDs; these help show just how much effort goes into producing these programs and highlight the skill and craftsmanship at all levels. This is a box set that is worth getting and well worth keeping for those Sunday winter afternoons or late evening to watch over and again.

Regarding the extras - they're excellent and abundant.

Fluent and non-stop commentaries are presented on all 20 episode in various combinations of writers, directors, actors and other staff, and for the first time the commentaries are also subtitled! Thanks!
On them, they tend to share us with lots of interesting behind the scenes info, and with almost no dull moment.

Featurettes include, among others, a 20 minutes profile on Paul McGillion (disc 2), a 20 Minutes profile on David Hewlett (disc 3),a 15 minutes intro about Ronon's character (disc 4) and an 18 minutes "SGA: Stunts".

Some nice and subtitled Mission Directives on selected episodes.

A small and nice booklet with episode summaries and special features info is also present.

Overall it's apparent that they've put a lot of effort in order to present a joyful experience to all the fans.

AllyB
5つ星のうち3.0 Great show, but why all the adverts?
2018年8月17日に英国でレビュー済み
Amazonで購入
I love this show, and it's great to be able to rewatch it. But the advertisements are driving me nuts, especially as it plays them between every episode. It also plays them if the DVD has a problem with playback (which it seems to do quite often) on my laptop. So, fabulous show, but only three stars because the product is kind of ruining my experience of watching it...
続きを読む
役に立った
フィードバックを送信中...
フィードバックをお寄せいただきありがとうございます。
申し訳ありませんが、お客様の投票の記録に失敗しました。もう一度試してください。
違反を報告
レビュー を日本語に翻訳する

Tania
5つ星のうち5.0 Ronan Dax is Brilliant
2016年7月15日に英国でレビュー済み
Amazonで購入
Season two is just a brilliant as season one. I was sad to see the adorable Ford go but love the introduction of Ronan Dax (The very sexy Jason Momoa aka Aquaman) in fact even if the show was rubbish (which trust me, it's not) I would watch for him alone!!
続きを読む
役に立った
フィードバックを送信中...
フィードバックをお寄せいただきありがとうございます。
申し訳ありませんが、お客様の投票の記録に失敗しました。もう一度試してください。
違反を報告
レビュー を日本語に翻訳する
その他の国際レビューを読み込む

DD
5つ星のうち4.0 Content Brilliant - Shame about the repeated threats of prosecution
2013年10月3日に英国でレビュー済み
Amazonで購入
I bought and paid for this DVD box-set, so why do I have to sit through the "You shall not download a car" crap (and all of the adverts) every time I want to watch it?!

Fortunately, if you play DVDs on a PC you skip all of that nonsense and enjoy the actual TV show that you paid for.

raven_guest
5つ星のうち4.0 .
2015年4月27日に英国でレビュー済み
Amazonで購入
I loved SG1 and adore Jason Momoa, so thought I'd give this a try. It's fun and interesting, but there isn't much in the way of character development. None of them seem to have progressed from the first series and seem to be stuck. McKay is completely unlikeable and annoys the living heck out of me.
続きを読む
役に立った
フィードバックを送信中...
フィードバックをお寄せいただきありがとうございます。
申し訳ありませんが、お客様の投票の記録に失敗しました。もう一度試してください。
違反を報告
レビュー を日本語に翻訳する

Billy
5つ星のうち5.0 Second Series finds its footing!
2016年7月31日に英国でレビュー済み
Amazonで購入
The Second Series introduces Ronan and the stories & action are even better than the first!

Mrs Mopp
5つ星のうち5.0 Excellane series for all genres
2010年9月22日に英国でレビュー済み
Amazonで購入
I throughly enjoyed watching the Stargate SG1 series having found enjoyed watching the original Stargate film with Kurt Russel, though I prefered Richard Dean Anderson in the part of Jack O'Neal, as he bought a human aspect to the film. We had Stargate Antlantis series 1 bought for us by our daughter one Christmas (knowing that we (my husband and me like Sci Fi) and we both really enjoyed it, not that we expected much from the series, since then we have seen up to series 4, we have series 5 to watch (after we have finished Andromeda - told we we liked sci Fi), I would recommend to the anyone, though I don't think you have to watch SG1 before hand, it is quite an easy story line to get in to. I would definetly give in 10/10.
続きを読む
役に立った
フィードバックを送信中...
フィードバックをお寄せいただきありがとうございます。
申し訳ありませんが、お客様の投票の記録に失敗しました。もう一度試してください。
違反を報告
レビュー を日本語に翻訳する

D. Morris
5つ星のうち4.0 The wraith may suck, but this show doesn't!
2009年7月12日に英国でレビュー済み
Amazonで購入
Four more corking episodes of sci-fi entertainment. I won't go into plot lines for these four episodes. But they are all good ones. rodney and sheppards characters are built upon, and at least two of these storys have links to future plot lines in season three. You get more great ancient technology, the cuddly funsters the Wraith. Genetic experiments etc. The characters have grown and even Ronan is fitting in to place. At times this almost out shines sg1. Well worth your pennys.
続きを読む
役に立った
フィードバックを送信中...
フィードバックをお寄せいただきありがとうございます。
申し訳ありませんが、お客様の投票の記録に失敗しました。もう一度試してください。
違反を報告
レビュー を日本語に翻訳する
その他の国際レビューを読み込む

Wolf Woman
5つ星のうち5.0 Stay in for action!
2013年10月23日に英国でレビュー済み
Amazonで購入
A great action season where Elizabeth really comes in to her own as a character. More on the Wraith which gave a background to Shepherd's link with Tod. Great character and one of my favourites.
続きを読む
1人のお客様がこれが役に立ったと考えています
役に立った
フィードバックを送信中...
フィードバックをお寄せいただきありがとうございます。
申し訳ありませんが、お客様の投票の記録に失敗しました。もう一度試してください。
違反を報告
レビュー を日本語に翻訳する

PAULINE BURTON
5つ星のうち5.0 Deja Vue
2013年2月28日に英国でレビュー済み
Amazonで購入
Been here before but if anything its better the second time around.Just as gripping,exciting and amazing as when I first saw these episodes on t.v.Almost feel like I'm there with the characters because I know them so well.Great buy,will be looking for the next season soon.
続きを読む
役に立った
フィードバックを送信中...
フィードバックをお寄せいただきありがとうございます。
申し訳ありませんが、お客様の投票の記録に失敗しました。もう一度試してください。
違反を報告
レビュー を日本語に翻訳する