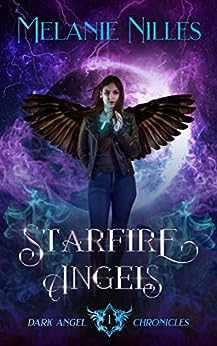 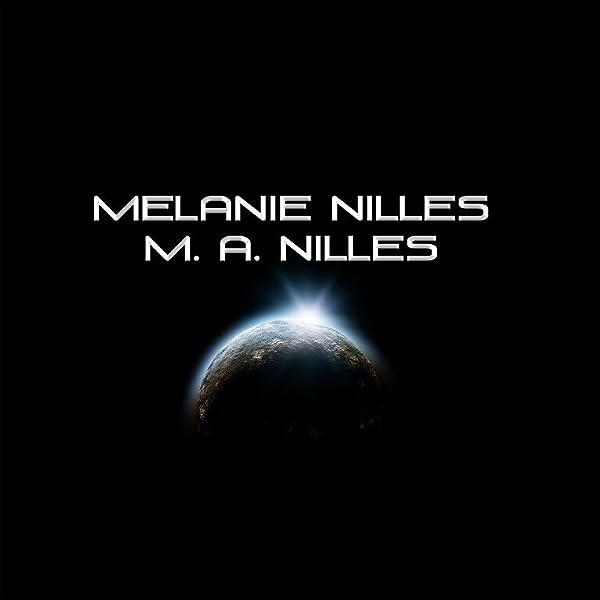 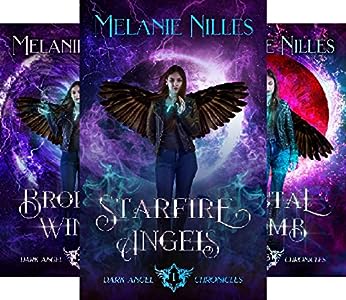 Melanie Nilles grew up on a western North Dakota cattle ranch and farm. After high school, she graduated from North Dakota State University with a bachelor's degree in Business Administration. She currently resides in central North Dakota with her family, which includes her husband and kids, and three cats. As M. A. Nilles, she writes dark fantasy and science fiction, including Tiger Born and the Legend of the White Dragon epic. For updates, visit her website at www.melanienilles.com. --このテキストは、paperback版に関連付けられています。

JSEdge
5つ星のうち1.0 Why me? Why me? Life is SO unfair!
2014年7月31日に英国でレビュー済み
Amazonで購入
Oh, Raea, you are a horrible person. In fact, a more hateful protagonist I never have met.

It's disappointing. Truly. Because the whole Inari concept is pretty intriguing and I can tell serious thought was put into the theory behind it. But the cast of characters through which the story is told falls atrociously short on all levels.

Starfire Angels begins with Raea in school. She's cursing her misfortune at being cornered by her best friend, Josh, and subjected to his geek out over the 'Dark Angel'. Such a hardship, giving time to her best friend's interests. I mean, a mysterious winged hero at work in a small town, how supremely dull!

Then an ill-timed vision overcomes her, she falls and is caught by the creepy outcast guy (who is strangely attractive...). This guy keeps to himself and hasn't ever done a damned thing against her but everyone mocks him, so she does too. That's fine, right?
And, so, there she is, touched by the weirdo in view of the whole class -oh crap, no. Worst day EVER! They're all gonna think he's her boyfriend and she's teased enough as it is.

Yeah, she gets bullied. Apparently because of the weird coloured splotches on her hands. I'd argue its surely more to do with her being a whiny-ass mare.

More woe-is-me strikes when wings shoot from her back, disturbing her slumber. Ok, sure, I'll concede: A freak out here is understandable. But is her focus on 'what the hell's with these wings? What could they mean?'...Nope. She's fretting about going to school with them and people thinking she's even more of a freak. A few deep breaths though, and phew, sleep returns. Yup, the growth of huge feathery wings is totally not worth losing sleep over.

Eighteen and of supposedly high intellect...erm, yeah, not buying it. The girl's development suggests 14y at most. Even then she makes for a particularly shallow and stupid example.

Her treatment for those who care for her is disgraceful, her obsession with the 'hot' Pallin is ridiculous (how blatantly dodgy can someone be???) and her reactions to the big revelations make her deserving of a huge high five to her face. She's all about the 'why me? Life is so unfair' and her reasoning for the over indulgent self pity is utterly skewed.

I didn't get much at all from her supporting cast, either. Nina, especially, is just plain absurd.

As for writing style, it's mind-numbingly repetitive and frequently nonsensical. The plot progression: Pure insanity.

If there was ever any doubt in my tenacity, the act of seeing this book through to its end eradicated that.
続きを読む
違反を報告
レビュー を日本語に翻訳する

Lynn Worton
5つ星のうち4.0 An Entertaining Read!
2014年9月12日に英国でレビュー済み
Amazonで購入
This is the first book in the Dark Angel Chronicles. I really enjoyed it.

Raea Dahlrich is a character I really liked. She is a seventeen year old with the usual angst issues. But, all is not what it seems and her life is about to change forever. I liked watching this character grow throughout the story.

I downloaded this book a while ago, but never seemed to get time to read it. I found myself in between books and decided to give this story a try. I am glad I did, because it was a really fun story to read.

Raea is not the only great character in this story. I really liked Josh, Raea's best friend. He is a wonderful guy, if a bit obsessive about finding the "Dark Angel" who had been spotted helping people in the town. His enthusiasm made me smile. Then there is the mysterious Elis, who lives next door to Raea. He is full of secrets, but as the story progressed I found myself liking him a lot. I didn't really warm up to Pallin, the new student in Raea's class. And with good reason, as it turns out.

This story is very similar to some of the other YA romance books I have read over the years. However, this book has a unique twist. This twist gave the story a freshness that was surprising to say the least. The author has taken the concept of aliens, known as Inari (or Angels to us humans) using Earth as a sanctuary in a galactic war. This war has raged for millennia over the Starfire Crystal, a powerful collective of entities. Raea is thrown into this war and finds herself pitted against the Shirukan, who are after her piece of the crystal. There is plenty of danger and adventure in this tale, but not all of it from the Shirukan; there is also a nosy reporter digging around. The story is action packed and fast paced. I was sad to reach the end of the story, and I am now looking forward to reading the next book in the series.

Melanie Nilles has written a wonderful young adult paranormal romance. I loved her fast paced writing style, but some of the scenes didn't seem to flow as smoothly as they could have. Nevertheless, her book was an enjoyable read.

I highly recommend this book to teens aged 15+ and to adults who love reading the YA Romance genre. - Lynn Worton
続きを読む
違反を報告
レビュー を日本語に翻訳する

lankylil
5つ星のうち4.0 Good read.
2011年8月30日に英国でレビュー済み
Amazonで購入
This is an enjoyable young adults book. Raea loved her parents but they were both killed in a freak tornado that demolished her house whilst she was on a sleep over at a friends house when she was very young. She has lived with her paternal uncle and aunt since then.

She is a normal teenage ~ she is just a couple of months from graduating high school and going to college. She has a group of close knit friends and a bully who delights in tormenting her, especially about the strange blue birth marks on her hands. A gorgeous foreign student starts at their school and takes an immediate interest in Raea, which she finds very flattering as she's never had a boyfriend. However, she also starts becoming very aware of another student, Elis.

Elis is ignored by most people as he doesn't mix with other students but she finds herself becoming more drawn to him. She keeps dreaming of her Mum. Then one night she suddenly wakes up in incredible pain and finds giant wings bursting out of her back. That is when things really start happening to Raea, not least of which is when she finds out that she isn't even human! Raea's life then starts to get really complicated as she tries to decide who she is more attracted to ~ Pallin or Elis, she has to come to terms with the fact that not only is she an alien but she has other talents too, not least of which is the ability to fly! Raea also has someone that wants to kidnap and then kill her. There is a very pushy reporter trying to uncover the very secrets that Raea is trying to hide.

This was an enjoyable read and I have purchased the sequel.
続きを読む
違反を報告
レビュー を日本語に翻訳する

Mole
5つ星のうち3.0 A bit disappointing
2011年5月20日に英国でレビュー済み
Amazonで購入
The story is about someone claiming to have seen an "Angel" in the sky. As it happens, they have seen something, but it's not an angel at all. The story slowly unfolds to reveal that a young woman is a refugee from another world; she is a person of importance and is being sought by others of her kind, as well as being protected by others; these are the "Angels" that people see.

I liked the concept of the story, and there were a number of really quite good sections of writing. However, I was a bit bored by much of the rest, as they seemed to be a too much like many of the US TV High School dramas. I felt that the plot kept drifting without really explaining why and I found myself fast forwarding through many pages. I consider that it could have been improved quite a bit, by cutting back on some of the less relevant material, and then perhaps focussing more on the core story; but perhaps that's just me.

The story ends leaving many things unresolved; well this is meant to be a series of stories, so that could be appropriate, but I didn't really feel that the book would encourage me to seek out any others.
続きを読む
11人のお客様がこれが役に立ったと考えています
違反を報告
レビュー を日本語に翻訳する

Bethanhazel
5つ星のうち3.0 Interesting start to a series.
2011年6月27日に英国でレビュー済み
Amazonで購入
I got this free on Kindle and it's not a bad read. The main character Raea is eighteen, although I thought she seemed younger. She has strange aquamarine markings upon her hands that cannot be explained, her mother and stepfather were killed in a tornado when she was five. The story begins after there have been several sightings of a black winged angel in the small town. Prompted by the sightings a journalist, Nina, comes to town to investigate and she is intrigued by the markings on Raea's hands and does all she can to get to the bottom of both issues which are ultimately connected.
As well as dealing with the reporter Raea must come to terms with her true heritage, her parents came from another world and she has wings! The crystal she wears around her neck, given to her by her mother, is extremely important to her world, there are those that would protect it and those that would steal it.
This isn't too bad a story, there are some interesting elements such as the Starfire's power, Raea's discovery of who she is and her learning to use her power, flying lessons and in all these make the book worth reading. Raea's homeland is described only in brief snatches which adds intrigue and may be developed in further books. I thought that some aspects of the novel were very obvious, you will probably identify which characters are god and bad very quickly, much quicker than Raea who doesn't appear to be the best judge of character. Similarly there were a lot of times where Raea's thoughts were included and although this helped me to understand her character, she was, at times, very immature with her inner thoughts and fairly fickle with her emotions as well. I thought that the rape aspect was drawn out and not a particularly useful addition to the narrative, surely a simpler catalyst could have worked as effectively. I think this book is readable and that overall it was pretty good, there was enough good points that I would recommend this book particularly whilst it is at a low price and if the sequel is also low priced I will purchase that as well. This is a young adult/teen read and I think it will appeal to anyone who enjoys fantasty elements to their reading. It's not perfect but it's worth a read.
続きを読む
6人のお客様がこれが役に立ったと考えています
違反を報告
レビュー を日本語に翻訳する
すべてのレビューを参照します
トップへ戻る
Amazonについて
Amazonでビジネス
Amazonでのお支払い
ヘルプ＆ガイド
日本語ショッピングのための言語を選択します。 日本ショッピングのための国/地域を選択します。
© 1996-2020, Amazon.com, Inc. or its affiliates