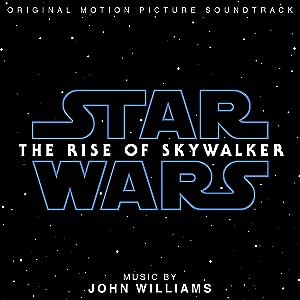 L. B.
5つ星のうち1.0 It is unacceptable that music from a key moment in the movie, is missing.
2019年12月23日 - (Amazon.com)
形式: CDAmazonで購入
1 Star review is not because of the work of John Williams, he is brilliant as usual. I'm giving a 1 star because the soundtrack is missing key music from the movie and that I find completely unacceptable. Let me guess . . . another CD with "previously unreleased tracks" will be issued sometime in the future. Again, unacceptable.
続きを読む
39人のお客様がこれが役に立ったと考えています
レビュー を日本語に翻訳する

Critical Mass
5つ星のうち4.0 BASICALLY A FINE CODA TO THE PREVIOUS EIGHT
2019年12月29日 - (Amazon.com)
形式: CDAmazonで購入
I gave this score a generous 4 stars, not because I can find fault with the music itself. But the fact is, like it or not, this recording is basically a fine coda to the previous eight Star Wars movies. You've already heard nearly 99% of it all before. Indeed, the last truly original Star Wars score was, in my opinion, "Revenge of the Sith". Yet to expect an original score or many new original themes as a capstone to eight predecessors spanning some 42 years is a near impossibility even for the great John Williams. Just the thought of doing another Star Wars score must have seemed both daunting as well as challenging to the maestro. One must always bear in mind how many other varied and phenomenal scores Williams has created during these past many decades. He certainly may be considered, arguably, the greatest of all film composers though I personally despise such titles. It's like comparing oranges to bananas, etc., etc. Rather, I would consider it a tie between some 8-10 composers going back to and including the "Golden Age" of film music.

That being said, I lopped off one star for lack of originality. But that's not Williams' fault. He was given a Herculean task and is still to be commended. Listening to this score brings on a reflective joy. It has the comfort of an old pair of shoes that, despite their age, retain a certain luster. It's like visiting the original home you grew up in from the perspective of old age. Or, better yet, it's like the aging of fine wine. The way Williams was able to bring into play familiar themes and make them energetically work again is to be applauded. When the theme for the Emperor Palpatine emerged, it momentarily took me back to the original Death Star throne room. The familiar yet ageless Darth Vader march, the grand opening theme, the sudden closing of the film whose music shifted instantly into that of the Closing Credits all fed a timeless chord (pardon the pun) as the Star Wars saga finally reached its inevitable conclusion. One should be thankful that Williams was able to live this long to write his Finis. The same cannot be said for all too many great composers who died too young or left work unfinished. A final thought: Imagine if Beethoven had been asked to do a Tenth Symphony and was told that it was a must in order to add a necessary completeness for his previous Nine. Think of the following as well: Williams may be expected to do another "Indiana Jones" movie score.
続きを読む
8人のお客様がこれが役に立ったと考えています
レビュー を日本語に翻訳する

lifevoyager007
5つ星のうち5.0 Utter brilliance--thank you, John Williams!
2019年12月21日 - (Amazon.com)
Amazonで購入
This soundtrack is the PERFECT accompaniment to the conclusion of the Skywalker saga! John Williams wraps up his commitment to the Star Wars movie franchise through compositions that deeply connect to the emotional content being displayed on the screen. The music honors the past legacy of the franchise while creating new interpretations of themes that are a delight to both the ear and the heart.
続きを読む
10人のお客様がこれが役に立ったと考えています
レビュー を日本語に翻訳する

Markn3059
5つ星のうち5.0 John Williams does it again!
2019年12月22日 - (Amazon.com)
形式: CDAmazonで購入
Say what you may about the 9 movie Star Wars saga as good or mediocre cinema, no one can deny that the movies would never have had the impact they did without the brilliant soundtrack scoring of the great John Williams. This CD will take its rightful place in my collection with the other 8. In my opinion, this is the best and most cohesive set of soundtracks you can get - especially when you consider that they were composed over a period of 42 years! Buy this one to complete your set - you won't be disappointed.
続きを読む
7人のお客様がこれが役に立ったと考えています
レビュー を日本語に翻訳する