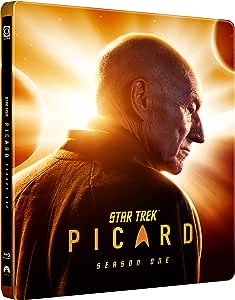 RDD
5つ星のうち5.0 A Phenomenal “Star Trek” Series!
2020年10月10日にアメリカ合衆国でレビュー済み
Amazonで購入
“Star Trek Picard: Season One” picks up after the events of “Star Trek: Nemesis” (2002), in which Data (Brent Spiner) sacrificed himself to save the crew of the U.S.S. Enterprise-E and future relations between the Federation and Romulus looked to be improving, and “Star Trek” (2009), in which Romulus was destroyed due to a supernova and Ambassador Spock was caught in a wormhole created to absorb the destructive energy, creating the Kelvin Timeline.

When the show begins in the Prime Timeline, Admiral Picard (Patrick Stewart) has retired from his position in Starfleet following the failure of the Romulan refugee effort (see: Una McCormick’s “Star Trek: Picard: The Last Best Hope”). Bitter and disappointed, he finds himself drawn back into galactic politics when a positronic, Soong-type android enters his life and claims to be the offspring of Data. Picard must work with robotics expert Dr. Agnes Jurati (Alison Pill), Dr. Soji Asha (Isa Briones), former Starfleet lieutenant commander Raffi Musiker (Michelle Hurd), civilian captain Cristóbal Rios (Santiago Cabrera), Romulan refugee Elnor (Evan Evangora), and Seven of Nine (Jeri Ryan) to help Data’s offspring and avoid members of the Romulan diaspora, including Narek (Harry Treadaway) and Starfleet, like Commodore Oh (Tamlyn Tomita) who want to eliminate the androids following the disaster on Mars. Picking up threads from “Star Trek: The Next Generation,” “Star Trek: Deep Space Nine,” and “Star Trek: Nemesis,” the series further explores the nature of Romulan culture and its relation to the Federation, especially now that they are a refugee society following the destruction of Romulus.

This Blu-ray steelbook contains all ten episodes of the first season as well as bonus features all in a sleek case. Bonus features include the “Star Trek: Short Treks” episode “Children of Mars,” story logs, deleted scenes, “Aliens Alive: The xBs,” a look at props, a look at set-building, a gag reel, and more. “Children of Mars” was not included in the “Star Trek: Short Treks” Blu-ray set, so it’s good that it’s here as the story is part of the backstory to the events between “Star Trek: Nemesis” and “Picard.” The series engages with the deep philosophical issues that drove stories in both the original “Star Trek” and “The Next Generation” while introducing wonderful new characters for the audience and featuring the return of fan-favorites. It draws upon traditions of quest and redemption stories, tapping into the quintessential truths that “Star Trek” has long elevated. Michael Chabon, Akiva Goldsman, Kirsten Beyer, and Alex Kurtzman have created something that further demonstrates the continued power of “Star Trek” for examining the human condition.

Robert E
5つ星のうち5.0 Outstanding Series
2020年10月8日にアメリカ合衆国でレビュー済み
Amazonで購入
At first I was a little skeptical, but it is a really good show and since I don't have TV where I live can't wait until the next season comes out on DVD. I fully enjoyed and any fans should get the DVD for the special features.
続きを読む
3人のお客様がこれが役に立ったと考えています
違反を報告
レビュー を日本語に翻訳する

Amazon Customer
5つ星のうち4.0 Sci-fi tv show
2020年10月15日にアメリカ合衆国でレビュー済み
Amazonで購入
This show is so fantastic that I'm glad i bought it. The writers put a lot of time and effort into making this show so much better than the original. Even though data was dead, at least we got to see him again as a conscious of picard. I especially liked how the borg were reassemble back into humans despite a few decrepitces. I can't wait for season 2.
続きを読む
1人のお客様がこれが役に立ったと考えています
違反を報告
レビュー を日本語に翻訳する

Rob Goblin
5つ星のうち4.0 Kinda close but not
2020年10月7日にアメリカ合衆国でレビュー済み
Amazonで購入
Is this the best Star Trek offering? No. Is this the best Star Trek offering in 2 decades? Yes! The flaws and issues have been barked about for awhile now and honestly I have little issue with the plot, story lines or dialogue when its Stewart back as Picard. I am immensely entertained and so grateful Stewart came back for a last Hurrrah! It's not TNG or Deep Space Nine but nearly nothing is that good.
続きを読む
違反を報告
レビュー を日本語に翻訳する