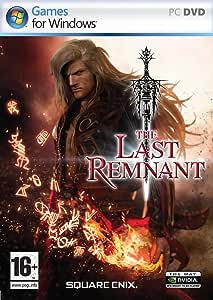 Pillar
5つ星のうち4.0 An underappreciated game but not for everyone
2011年3月21日に英国でレビュー済み
Amazonで購入
This game was developed by Square Enix, the makers of final fantasy and the game does feel like a final fantasy game minus the title. It is also available for xbox 360 but I would recommend the pc version due to the better graphics if your pc is good enough, which would be very likely considering the game came out many years ago (in 2008).

1 good graphics for the time but may pale in comparison to the most recent ones
2 charming, melodious music espeically the battle theme which never gets boring
3 very cheap price
4 has a unique turn-based battle system in which you control whole unites rather than only characters
5 an engaging story

1 very challenging
2 may take a long time to finish

The game also has a system in which the more you win battles the harder, the bosses become which you cannot overlevel in this game. All in all, I would recommend this game to any Jrpg fan.
続きを読む
違反を報告
レビュー を日本語に翻訳する

Gregory Bishop
5つ星のうち5.0 Square Enix's best RPG since Final Fantasy X
2013年9月16日に英国でレビュー済み
Amazonで購入
First things first: from what I understand from what I have read, get the PC version rather than the XBox one. There are apparently annoying bugs in the XBox version.

To be honest, I struggle to review things I like, compared to those I have issue with. It's far easier to tear down than to build up, it seems, especially without giving away details which are so much better to find out as you play. So this is probably going to be a relatively short review. Because, quite simply, I love it. It's a hidden gem which, especially now that it's older and cheap, you should really give a try if you like jRPGs. If like me, you love(d until no. 13) final fantasy, then give it a shot. It'll have a lot of the things you love about that sort of game, and you have little to lose.

Obviously it's hard to judge some things in a game a few years old, like, for example, graphics, but to be brief - the graphics are fine, I like the music, the story more than adequate (and a lot better than some of Square Enix's more recent attempts), one cut scene in particular which I consider fantastic, but, sadly, there's what I'd consider some irritating voice acting from the main character.

Like most RPGs, and, possibly, stories in general, you start out with a lone character, and build up from there, and in a way that is a pity, because until you gain a large number of party members the battle system doesn't really shine. It's an odd system in some ways, which takes a little bit of getting used to, but once you start to understand it it really shines. You see, you don't control units. You control squads. (Although you can make a squad of one...)

Once you have divided your units up into squads, you give them general instructions, rather than specific ones. Once you have given all your squads their commands, then they will all attempt to close with the enemy and do what you told them to. However, of course, your enemies will have their own instructions and will attempt to follow their own orders. You might instruct a squad to use physical attacks on a nearby enemy squad for example, or to use hexes against them. You might have a flying squad which wait to see if any of your other squads need healing, and then take care of them, or you might try to unleash some of your units' hidden powers.

And hidden is a word that describes this system well. There is so much depth to the system that you might well overlook because you are not told about it by the game. Utilising the formations you can set your squads up in can be an exercise in trial and error (or utter frustration and using the internet, depending on what kind of player you are), and even fully understanding how the squads should be set up, and how important specialisation is in a group is something that can easily pass a player by, even if they complete the game successfully. Likewise, working out the importance of moral, and how best to engage the enemy with multiple squads, attack an enemy from behind, or disengage a squad safely from an opponent can take a bit of time. The beauty is, however, that understanding the system enables you to actually control pretty fully what your squads - and even individual units - do, despite the initial impression that you have little control at all.

Hidden is a good word to describe the game as a whole, in fact, as if you slavishly stick to the plot when you complete the game, you will have missed out on a huge amount of what the game has to offer. Sidequests run rampant in this game, and the advantages of exploring and gaining leaders (as opposed to mere soldiers) to your little army can't be overstated. And, in a more general sense, as this game isn't as well known as it should be, it could be considered a 'hidden' gem itself.

Give it a shot - I certainly think it's worth it.
続きを読む
2人のお客様がこれが役に立ったと考えています
違反を報告
レビュー を日本語に翻訳する

Rob Thompson
5つ星のうち4.0 A new spin on things
2013年1月19日に英国でレビュー済み
Amazonで購入
I purchased this game out of curiosity, and was not disappointed. A lot more strategy involved than I was used to, but still an enjoyable game nonetheless.
続きを読む
違反を報告
レビュー を日本語に翻訳する