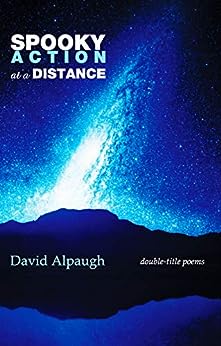 I can't count how many times I laughed out loud while reading David Alpaugh's Spooky Action at a Distance. Alpaugh's wit is so original, so outlandish, so outrageous, that at first it's hard to believe he's pulling off one after another of these double-title poems, a form he invented and one that could not be better suited to his brilliant, iconoclastic mind. As impressive as Alpaugh's poetic skill--his dexterity, musical ear and gift for turning clichés on their heads--is his range of reference. From childhood to history to mythology to politics to literature and back, Alpaugh takes us on a magical mystery tour through a universe of his own making. If you want delight informed by wisdom, humor laced with sharply observed social commentary, and entry into a world you never thought could exist, all you have to do is open this astonishingly inventive book.
-- Lynne Knight, author of The Persistence of Longing

For me, Alpaugh's wit--in the old high metaphysical sense of that word--is the primary source of his power and virtue. He is an insatiably curious man who somehow manages to get everything into his poems. In Spooky Action at a Distance, Alpaugh is all about serious play and endlessly capable of surprise. Tracking the moves he makes connecting double-title after double-title is its own reward, a pleasure so pure as not to be missed.
-- William Slaughter, editor of Mudlark

David Alpaugh's Spooky Action at a Distance offers readers a cornucopia of delights, complications, and some truly moving insights--all in an intriguing new form of his own invention. Alpaugh's double-title form shows how two titles can be separate, like two photons miles apart, yet "entangled" in meaning and intent. Alpaugh is an excellent poetic space travel guide. This collection reminds me of the language used to describe properties of quarks--strangeness and charm. It takes a writer with a deft touch to work in such a structured form without the form interfering with the meaning. Alpaugh's poems are structured, but still filled with plenty of actual strangeness and charm. And one need not enter a particle accelerator to discover these surprises. Just get this book!
-- Kathleen Lynch, author of Lucky Witness

David Alpaugh holds degrees in English from Rutgers University and the University of California, Berkeley, where he was both a Woodrow Wilson and Ford Foundation Fellow. His poems have appeared in more than a hundred literary journals from Able Muse to Poetry to ZYZZYVA, and his first collection, Counterpoint, won the Nicholas Roerich Poetry Prize from Story Line Press. David Alpaugh's essays, The Professionalization of Poetry (Poets & Writers Magazine), What's Really Wrong With Poetry Book Contests (Rattle), and The New Math of Poetry (Chronicle of Higher Education)--have been widely discussed online. His musical play, Yesteryear: 3 Days in Paris with François Villon, was recently published by Scene4. Since he debuted the double-title poem in Mudlark in 2016, more than a hundred have appeared in journals and anthologies. He currently teaches literature for the Osher Lifelong Learning Institute (OLLI) at their UC Berkeley and Cal State East Bay campuses. --このテキストは、paperback版に関連付けられています。