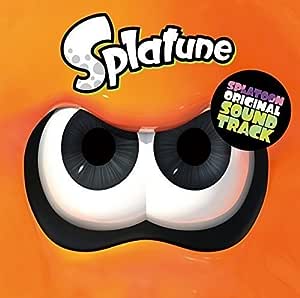 Mr. J. Wilson
5つ星のうち5.0 Great tunes!
2016年1月30日に英国でレビュー済み
形式: CDAmazonで購入
Lots of songs from the menus to gameplay songs, nice bonus having some of the sound effects too! Oh and comes with little art cards!
続きを読む

Alex Leatherby
5つ星のうち5.0 CD quality tracks of all the music from Splatoon 1, what's not to love about that?
2018年7月25日に英国でレビュー済み
形式: CDAmazonで購入
Arrived quickly, in factory new condition, all the tracks sound great, not a whole lot else to say about it, anybody who's a fan of the music in Splatoon picking this up is a no brainer!
続きを読む
役に立った
違反を報告
レビュー を日本語に翻訳する

Chris
5つ星のうち5.0 Worth it.
2017年8月10日にカナダでレビュー済み
形式: CDAmazonで購入
If you're anything like me, you probably rigged together a system with your WiiU and a sound-recorder like Audacity or GarageBand to "make" yourself little MP3 versions of the music by recording their music player game. Also if you're like me, you may have decided that it really didn't have the right quality, and that a lot of the music didn't feel complete that way (since the music-player in Splatoon plays things on a loop forever).

If you're thinking about going through the time to do all of that setup, I would encourage you to buy the CD instead. The quality is better, and the songs are arranged in a way that they have endings that make sense, and really, it's just a really cool thing to own.

Inside the CD case you'll find a set of alternate cover pages that you can put at the front of the jewel case and two CDs, filled with all of your favourite music to splat squid-kids to. It also includes some of the soundeffects from the game, which is a fun thing, as well as a live performance of Splatattack.

If you're hoping for the special singles from the Squid Sisters, "Bomb Rush Blush" and "Tide Goes Out", this CD does not include those, but if you were just enamoured with the music that played while you were playing the game, this is the soundtrack for you.

Keimori
5つ星のうち5.0 A great sountrack.
2017年5月10日にカナダでレビュー済み
形式: CDAmazonで購入
Came in time. Nice Packaging with some nice "Album art" prints inside the jewel case. I adore how complete this soundtrack is, It has every song in the game you could ask for, and it even has the sound-effects for thous who like their soundboards. I highly recommend this to any fan who likes the soundtrack of Splatoon.
続きを読む
2人のお客様がこれが役に立ったと考えています
役に立った
違反を報告
レビュー を日本語に翻訳する

Reace's Pieces
5つ星のうち5.0 One of Nintendo's Most Memorable, Yet Unique Soundtracks in Recent Years.
2017年1月31日にアメリカ合衆国でレビュー済み
形式: CDAmazonで購入
The 90's called, and they want their Saturday morning cartoon themes back. Well guess what? They're not getting ANYTHING, because Splatoon used all of them up to make it's fun-filled "too cool for school" throwback soundtrack when it released back in May of last year. On October 20th, 2015, Nintendo released the soundtrack in Japan under the amazing name of Splatune. While not released in America yet, you can import it right now for about the same price an album of this size is worth. This soundtrack is so catchy! It covers a few different genres from 90's Alternative Rock to Heavy EDM and just plain weirdness that I can't even think of a genre description for. The game won an award for "best multiplayer shooter" at the Game Awards, and I wholeheartedly believe this soundtrack contributed heavily to that win.
続きを読む
5人のお客様がこれが役に立ったと考えています
役に立った
違反を報告
レビュー を日本語に翻訳する

I love this game and its soundtrack. Though as Splatoon 2 is obviously an option now, I still prefer this game's soundtrack much more than the second one.

I have fond memories of this game, with the original Squid Sisters, and experiencing it for the first time. And this soundtrack, to me, is more original and spunky than the second one. First of all, the sound of the first one is more "vibrant" and varies compared to Splatoon 2, which is more dubstep-like. There's nothing wrong with that, but I prefer the drums and weird synths in the first one.

Even if you have never played the first game, and instead the second one, this soundtrack is worth getting regardless. It is still Splatoon. And is still amazing. Another reason I prefer the first soundtrack is because it contains some of the same tracks that Splatoon 2 uses. Even the simple changes like the winning or losing music is enough for me to say I prefer the original. Also Now or Never! (the track that plays once the 1-minute mark hits in the game when the match is almost over) is just . . . so much better.

I'm not saying I dislike the second game's soundtrack, I just am much more attached to this one.

Overall, just get this soundtrack. It's fun.