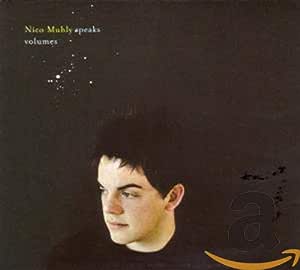 2007 release features seven exquisite works of chamber music for small ensembles with Electronics. This debut album by composer Nico Muhly was created with producer Valgeir Sigurdsson (Bjrk, Bonnie "Prince" Billy) in Reykjavik, Iceland and in New York, Muhly's hometown. Since having graduated from the Juilliard School for composition in 2004, 25 year-old Muhly has been causing significant ripples in modern music circles with a variety of projects. He has collaborated closely with artists as diverse as Antony (from Antony and the Johnsons who guests on Speaks Volumes) and Philip Glass, with whom he's had a long-standing relationship working on numerous stage works and film scores. Muhly played on Bjrk's album Med£lla where he met Sigurdsson and the idea of working together on an album was soon discussed. He then worked with Bjrk on the score for conceptual artist Matthew Barney's Drawing Restraint 9 film. Speaks Volumes doesn't sound like most classical records. It is not an idealized version of live musical performance or a substitute for the authentic live experience. It is not intended to conform to the nineteenth-century experience of classical music. Speaks Volumes was approached from a different direction. Sigurdsson's recording and production doesn't sit back and let the music sweep the listener away emotionally; it leans forward in exacting scrutiny and urges the listener to pay attention. Moteer.

Noel A. Hodda
5つ星のうち3.0 Speaks eventually
2008年11月4日にアメリカ合衆国でレビュー済み
Amazonで購入
I bought this cd some months ago now and have held off reviewing it until I'd lived with it for a while. It is a more disparate album than 'Mothertongue', a work that immediately opened itself to me, consisting as it does of complementary suites. 'speaks volumes' contains seven compositions, each of which should be judged alone. There is a variety of styles in evidence here and at first listen one is tempted to think that they are not all successful but that is a trap the casual listener can often fall into. Like all good music, these pieces take time to reveal their depths and their subtleties. Give this one spin, perhaps even just two or three and you may be tempted, as others have been here, to write it off as mere noise or sound-making but that would be a big mistake. 'Clear Music' becomes more beautiful every time I hear it; 'It Goes Without Saying' exhibits a growing brashness, like a kid growing in confidence; 'Honest Music', 'Quiet Music' and 'Pillaging Music' are the closest thing to a suite here, even though they are discrete pieces. They edge the listener through searching sounds played on violin, harp and then piano until discovery is made and consolidated on percussion, piano and celeste. 'A Hudson Cycle' is a wedding gift I wish I'd received and 'Keep In Touch' exhibits an at times nervous surety in it's mixture of viola accompanying recorded trombone and voice, the latter supplied by Antony from Antony and The Johnsons as short, nervous gestures of sound.

This is a cd that marks Mr. Muhly out as a young composer to watch, a confident modern voice that is not afraid to acknowledge his influences nor so arrogant as to dismiss them. No, it's not party music. But it is music and that music is challenging, approachable, enjoyable and always intriguing.
続きを読む
11人のお客様がこれが役に立ったと考えています
違反を報告
レビュー を日本語に翻訳する

Alexandra de la Vega
5つ星のうち4.0 Good!
2013年3月1日にアメリカ合衆国でレビュー済み
Amazonで購入
I like this but it didn't captivate me as much as "Seeing is Believing" which I heard live with the Los Angeles Philharmonic and went head over heels. I still enjoy the CD, too. The love is "I Drink the Air Before Me". His ideas, the journey and the resolve, always are well articulated, not a note is left dangling unless intended.

No doubt his voice will be heard for time to come as he continues to explore his vast inner landscape.