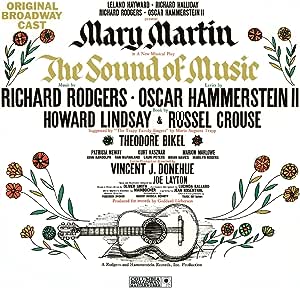 Most of the civilized world identifies this Rodgers and Hammerstein classic with the Robert Wise film, one of the most successful movie musicals of all time ("The Sound of Money," critic Pauline Kael termed it). Which is why this recording can be so disconcerting. Not only are there different tunes ("How Can Love Survive," "Laendler," "No Way to Stop It," but no "Confidence" or "Something Good," both written for the film), but Captain Von Trapp is played by heavyset folksinger Theodore Bikel, a far cry from young Christopher Plummer. Mary Martin was not only much older than the film's Julie Andrews, she wasn't even British! Then again, neither was the real Maria--and the stage version is, in many ways, more faithful to the Von Trapp Family Singers' true story. --Bill Holdship

The one and only original, starring Mary Martin! Richard Rodgers contributed the liner notes to this remastered reissue, which comes complete with original reviews, press clips, artwork, photos, Playbill and more-plus bonus material!