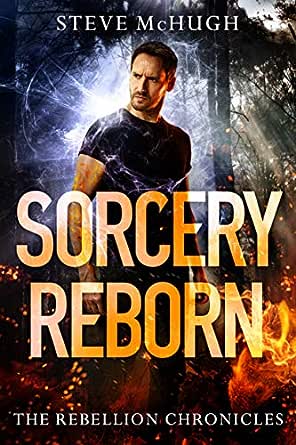 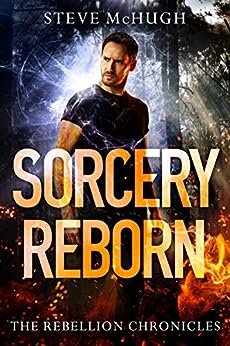 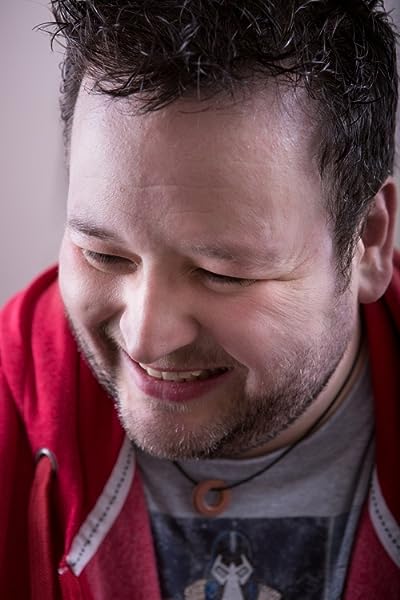 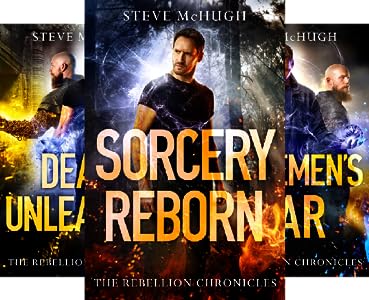 Steve McHugh is the author of the bestselling Hellequin and Avalon Chronicles. He lives in Southampton, on the south coast of England, with his wife and three young daughters. When not writing or spending time with his kids, he enjoys watching movies, reading books and comics, and playing video games.

I’ve been looking forward to this book for MONTHS. I love The Hellequin and Avalon Chronicles so was desperate to find out what happened to these wonderful characters next.

I worried that the story would feel a little slow or disjointed as we join the lead character, Nate, 2 years after the end of The Hellequin Chronicles, powerless and human while he awaits the return of his magic. My worry was totally misplaced however as McHugh is such a talented writer. He manages to keep the story interesting and cohesive, even when the main character doesn’t have access to the powers that form a rather large chunk of the storylines. Human Nate is the same hero as sorcery Nate, he still fights for the vulnerable and those who need him, even when he is technically outmatched in power. He’s a truly great protagonist, with buckets of humour and bravery, but never falling prey to the Superman character danger, where someone becomes a bland cliche ridden caricature - he isn’t a boring, purely good hero, he has his darkness and has made mistakes, but he always tries to own his s*** and keeps fighting for what he believes in.

The story starts to come back into line with Hellequin and Avalon at around 64% in, but it doesn’t feel like a slog to get there, and the remainder of the book doesn’t feel rushed. Lots of threads are woven together, including a small amount of split perspective, but even that doesn’t really affect the flow and pace. With such character heavy books it would be easy for it to feel too busy, but McHugh never allows himself to be bogged down. He has created wonderfully rich characters, who, even when only briefly appearing in a book, still manage to shine and steal scenes - Remy, Mordred, Tommy, Diana are some of these beloved characters, that, yes ok, I’d love more of, but their scarcity doesn’t hurt too much as the rest is so well done.

McHugh is definitely a ‘show not tell’ author which I greatly appreciate, and he is descriptive without becoming too flowery and over the top. I can’t stand writers who repeatedly wallop their readers over the head with descriptive passages, and I appreciate the fact that descriptions of characters aren’t repeated ad nauseum, which a lot of writers seem to do, not just in each new book in a series, but several times in a book. McHugh only briefly references Nate’s appearance, same with other characters that have been described in the previous books, and it makes for a much more pleasant experience. I also appreciate that he can actually write female characters, without reducing them to their cup size or their other sexual attributes, of which far too many writers seem incapable. His female characters are not weak, they don’t need to be rescued by their menfolk and his male characters (at least the good guys) treat women with respect. It never reads like tokenism, and he is very inclusive, there are plenty of LGBT characters, and none are used cheaply, nor is their sexuality used to labour a point.

Another of McHugh’s talents is social commentary, without crossing into preaching. A theme I see him repeat is history being written by the winners, or propaganda being used to smear people for ulterior motives. In this political era that’s all too relevant. The progressiveness never feels forced. His attitude towards racism and all discrimination is pretty clear without ever entering the ‘snowflake’ (gods I hate that term) territory, his points are valid and well stated.

This universe is truly one that I’ve fallen in love with. I’ve got my husband, father, and potentially, my aunt reading McHugh and they all love what they see. These books would make great TV or film, if in the right hands (Whedon I’m looking at you), but hopefully anyone who does choose to pick it up loves the universe as much as McHugh so they can do it justice.

Avid Kindler
5つ星のうち3.0 Disappointing
2019年12月14日に英国でレビュー済み
Amazonで購入
I pre-ordered this when it was first announced and had been looking forward to reading it, but I was actually tempted to give up and not bother finishing the book.

Why? Firstly the tediously repetitive swearing by virtually every character. I am coming to really detest such lazy writing. If the author wants to portray most of his characters as foul-mouthed, at least he could introduce some variety, rather than using one word to death and beyond.

Secondly, there was too much information and plot building conveyed by lengthy conversations which lacked distinctive character voices and styles or the use of some descriptive prose to help the reader keep track of who was saying what.

Thirdly, I found the splitting of the narrative between Nate in the earth realm and Layla and her team in the various realms they visited acted the reduce tension rather than building it.

Fourthly, the power (or “powers”, so comic-book has the writing become) of the protagonists has now grown to such an extent that any tactical thinking seems to have been dropped in favour of exchanging huge blows that fling an opponent through walls or break them to pieces, only to have them immediately healed and entering the battle again. What works in a two hour movie or an image-based comic does not work so well in a full length novel.

What has happened to the character development of the earlier books - the very thing that makes you want to keep reading about them? If this had been the first McHugh novel I had read I would not have been hooked on the series. Sadly, I think this is going to be the last.
続きを読む
8人のお客様がこれが役に立ったと考えています
違反を報告
レビュー を日本語に翻訳する

Paul K. Jeffrey
5つ星のうち5.0 Welcome back Nate!
2019年12月6日に英国でレビュー済み
Amazonで購入
After what seems like an eternity (and the exact timescale is in fact made clear) Nate Garret is back and it's a welcome return too!

Steve has a style of writing which makes his works a joy to read and this first book in the Rebellion Chronicles is no exception. Steve understands that people know what a forest looks like and doesn't have to spend 3.8 chapters on describing which particular shade of Green the leaves are... This is important because it allows the story and in many cases the dialog, to flow more cleanly and with much greater impact on the reader.

Almost instantly jumping into the action, Sorcery reborn delivers the return of much loved characters, instantly detestable baddies, a supernova revelation and all the other elements you come to expect of Steve's works.

If you've not read any of Steve McHugh's works before I recommend you go do so now. You won't regret it.

The next book is now sitting in my pre-order list and I'll be nudging Mr McHugh on his Social Media sites to make sure he stays focussed on delivering on the scheduled date!
続きを読む
4人のお客様がこれが役に立ったと考えています
違反を報告
レビュー を日本語に翻訳する

Thomas Pegg
5つ星のうち5.0 Nate’s back, strap in!
2019年11月25日に英国でレビュー済み
Amazonで購入
Well it feels like longer than 2 years but Nate’s back in business and business is good. Hard to say much without spoiling but suffice it to say that the writer builds tension nicely as still all too vanilla Nate is caught up in Avalon related events before he is ready through to a rewarding climax as many things are revealed and this next arc is well and truly underway. Meanwhile Team Layla are busy taking care of their own mission which it seems will be just as vital to the larger arc.

Plenty of pay off for the patient from the great wordplay between the reunited characters, some mild hints as to the writer’s take on the correct treatment of Nazis and a couple of personal shocks at the end that will change the stakes for Nate and Tommy.

This is high speed all action writing so open the page and strap in.
続きを読む
5人のお客様がこれが役に立ったと考えています
違反を報告
レビュー を日本語に翻訳する

Andy Bradshaw
5つ星のうち5.0 This Series Just Keeps Getting Better
2019年11月23日に英国でレビュー済み
Amazonで購入
Sorcery Reborn features a particular moment that all readers have been waiting for for a looong time...

If you haven't read the series, I must urge you too. Steve McHugh has created one of the most enveloping and huge worlds in this series. Whole pantheons of gods, characters of legend, you name it, it's probably there. His writing style continues to engage from the first page and as a result, the books are very difficult to put down. This addition to the series is no different, a thoroughly compelling read, the kind where you are almost disappointed you finished the book!

No matter, I have pre-ordered the next in the series, in a matter of minutes after finishing this one actually.