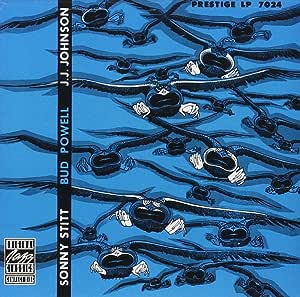 A Music Fan
5つ星のうち5.0 Spare a thought for JJ
2008年6月12日 - (Amazon.com)
形式: CDAmazonで購入
I have a fairly extensive collection of cd reissues, and it's not short on either Stitt or Powell. And I stipulate that the Powell-Stitt material on this disc is everything that earlier reviewers say. But the implied relegation of the JJ sides to an afterthought strikes me as a disservice to the acknowledged master of Diz's "ill wind that nobody blows good."

Granted the pairing of John Lewis and Bud Powell-led sections is not an intuitive one, and the fact that the JJ set consists of 2 takes each of four songs might detract some. But the tunes in question are all beauties-especially Lewis's evocative "Afternoon in Paris" and JJ's light-as-a-feather "Elora". "Teapot " gives Sonny a chance to blow and "Blue Mode" lives up to its title quite nicely.

JJ's playing is impeccable throughout and Sonny responds in kind, albeit in a more restrained than usual manner. Well, what would one expect when the grouping's rhthym section is led by the pianist who would go on to form the MJQ?

OK, perhaps JJ and Sonny's material is not a mesh,stylistically, with what comes before, but listened to in its own context, it's (imo) more than worth the time invested.

Old Tim
5つ星のうち5.0 Great album
2016年10月20日 - (Amazon.com)
形式: CDAmazonで購入
Great album Sonny Stitt is to my mind one of the most underrated tenor players and JJ and Bud are likewise greats. This is good bop
続きを読む
1人のお客様がこれが役に立ったと考えています
レビュー を日本語に翻訳する

John Kempkes
5つ星のうち4.0 A True Bop Giant
2013年12月21日 - (Amazon.com)
形式: CDAmazonで購入
Sonny Stitt is one of the most underrated of all bop era saxmen and this collection which is half Sonny and Bud Powell and half Sonny and JJ Johnson showcase that huge talent
続きを読む
2人のお客様がこれが役に立ったと考えています
レビュー を日本語に翻訳する

Mike Tarrani
5つ星のうち5.0 Not all tracks feature Powell or Johnson - this foreshadows hard bop by five years
2016年9月19日 - (Amazon.com)
形式: CD
It's a shame there are no sound samples (at the time of this review) because describing the music in words is difficult at best. What I hear in this album, from a rhythm perspective, is a precursor to hard bop that would emerge somewhere around 1954-55. The drumming is a lot less choppy (in large part thanks to Max Roach's participation here), and is even different from what Max would be playing in 1953 on the Jazz at Massey Hall album.

That aside, the phrasing is distinctly different from the original bebop style of just four years earlier, which is another clue that the music on this album (and in the East Coast scene) was in a state of transition.

This album is actually the original as issued by Prestige in 1957, plus five bonus tracks (tracks 6, 11, 13, 15 and 17.) More importantly, Bud Powell is only on the first nine tracks with John Lewis on the remaining eight, and J.J. Johnson is absent from the first nine tracks. The core is Sonny Stitt on tenor sax and Max Roach on drums, both of whom are on every track. Curly Russell is on bass on the first nine tracks, with Nelson Boyd on the last eight. Surprisingly, the album is cohesive despite the personnel changes, and the sound quality is better than I expected from tracks that were recorded in 1949-1950.