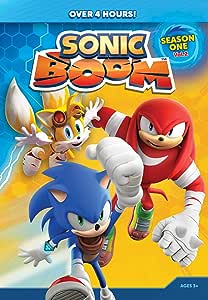 Noah M.
5つ星のうち4.0 More Sonic Boom on DVD, just one tiny yet glaring issue...
2020年2月6日 - (Amazon.com)
Amazonで購入
I've been eagerly awaiting this DVD release since I finished Vol. 1. My biggest complaint with Vol. 1 was the packaging seemed kinda cheap to me personally, but it appears to have been made a lot better with this one! Also, the previews that normally were at the start of the first volume were non existent, it just boots straight to the menu! My biggest issue with this set has to do with one episode. The episode "Fire in a Crowded Workshop" is not in English... I tried switch the audio to Spanish because I was curious if the episode's audio tracks got mixed around or something. But no, unfortunately this DVD does not include the English version of this episode. And it's a pretty decent episode too, which makes it even more disappointing. Aside from that, all the other episodes are normal and overall I did enjoy the rest of the DVD set. Just the one episode, man... I'd be curious to see if anyone else had the same issue.
続きを読む
6人のお客様がこれが役に立ったと考えています
レビュー を日本語に翻訳する

Anne M. Dial
5つ星のうち5.0 We Don’t Speak Spanish
2020年2月9日 - (Amazon.com)
Amazonで購入
I’m leaving a five star review for the vendor but not the product. My son saved up his money to purchase this and one of the episodes is in Spanish. He is very disappointed but I don’t think there is any point in exchanging because I am reading the same issue from others on Amazon and elsewhere.
続きを読む
1人のお客様がこれが役に立ったと考えています
レビュー を日本語に翻訳する

RaeC
5つ星のうち4.0 Great Show, Cute Figures, An Audio Gaff
2020年2月9日 - (Amazon.com)
Amazonで購入
I was thrilled to see they are continuing to make sets for this show, and hope they continue with season 2! The only problem I ran into another reviewer pointed out- one episode on the second disc, "Fire in a Crowded Workshop" has only Spanish available for audio. Changing the settings does not fix it.
続きを読む
1人のお客様がこれが役に立ったと考えています
レビュー を日本語に翻訳する

Amazon Customer
5つ星のうち4.0 You get what you pay for
2020年2月19日 - (Amazon.com)
Amazonで購入
I love the show and want to support it, but these DVD’s are really lacking. The lack of special features is especially disappointing. Really hope we eventually get a Blu-ray release, because the quality is pretty atrocious by today’s standards. It’s a shame. At least the figures are pretty decent for the price.
続きを読む
レビュー を日本語に翻訳する

Matthew T. Moore
5つ星のうち4.0 Good set but one glaring error...
2020年2月8日 - (Amazon.com)
As a previous review stated; the set is solid as far as what it delivers but it does have one production error that should've been corrected before release. Basically the episode 'Fire in a Crowded Workshop' is only available in the Spanish Dub and the English version is not available on the set. I even tried switching the audio tracks to the Spanish on the off chance that they set up incorrectly but they were both the Spanish dub. All the other episodes are fine and don't have this error but it is disappointing. Hoping for a corrected version of the DVD to made available. I didn't get the set on Amazon, I got in-store but I felt that the error should be brought to future buyers attention.
続きを読む
2人のお客様がこれが役に立ったと考えています
レビュー を日本語に翻訳する
Amazon.comのカスタマーレビューを見る(6) 5つ星のうち4.0
Amazonプライム会員ならお急ぎ便、日時指定便が使い放題
さらに、映画もTV番組も見放題。200万曲が聴き放題 。クラウドに好きなだけ写真も保存可能。
> プライムを無料で試す