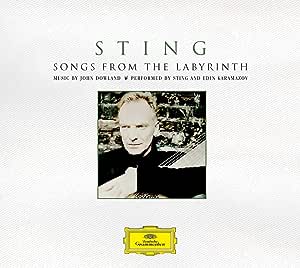 Songs from the Labyrinth

2006 classical project from the former Police main man and successful solo artist featuring the music of acclaimed Elizabethan songwriter, John Dowland (1563-1626). Sting is joined on this recording by much-admired lutenist Edin Karamazov, in what he describes as "a soundtrack to Dowland's life in words and music". Packaged in a digipak. Deutsche Grammophon.

2006 classical project from the former Police mainman and successful solo artist featuring the music of acclaimed Elizabethan songwriter, John Dowland (1563-1626). Sting is joined on this recording by much-admired lutenist Edin Karamazov, in what he describes as "a soundtrack to Dowland's life in words and music". Packaged in a digipak. Deutsche Grammophon.

Matt182
5つ星のうち5.0 Ancient songs given new life
2014年11月9日に英国でレビュー済み
Amazonで購入
This album was released on October 6th 2006. After releasing Sacred love (an album of original songs) in 2003 Sting once again, just like in the late 80's, began to suffer a bout of writer's block. With no new songs he decided to rediscover the songs of John Dowland and was introduced to lutenist Edin Karamazov through Sting's long time guitarist Dominic Miller. Together they created this album of songs written by John Dowland, a 16th-17th century Lute player who played in the courts of royalty including King Christian IV of Denmark but he never managed to receive the position he so heartedly coveted - to play in the court of Elizabeth I of England and later James I.

The album is a collection of Dowland’s songs, 1 by Robert Johnson who was a contemporary, and a letter written by Dowland to Sir Robert Cecil; secretary of state for Queen Elizabeth I when it was written in 1595. Sting calls it “a musical soundtrack” to the composers life and I think it’s a tribute that Dowland should be proud of. The booklet has plenty of information including the full story of the meeting of Karamazov, the life and times of John Dowland and Sting’s own experiences and opinions on the songs, as well as some original pictures of Dowland’s artefacts.

I actually bought the CD-DVD collection entitled ‘The journey and the labyrinth’ a year before I purchased the original album as I didn’t know how I would take the music and was putting it off for a while. When I watched the DVD documentary and listened to the live CD I was greatly impressed so decided I’d buy the original album and I’m very glad I did!

Having a mix of instrumental songs, lyrical songs - all melancholy in lyric but some being very bright and cheery in music such as Fine knacks for ladies (which uses a choir), the amazing Come again (1 of my favourites) and Clear or cloudy, and the pleading letter to Cecil, it really does give an insight into Dowland’s life and his feelings at the time. Dowland was obviously a very melancholy character, but with wry humour present in many of the lyrics, and some of the songs being quite upbeat and jolly, he definitely wasn’t what some describe as a ‘depressive‘.

My personal favourite from the album is the Robert Johnson (17th century lutenist not Blues musician) song Have you seen the bright lily grow? I can safely say it’s 1 of the most beautiful pieces of music I’ve ever heard. This album is full of real music, as Sting said; “there is nowhere to hide“, it’s just lute and vocal and that simplicity is where the beauty and quality lies. I could name all my favourites but really there isn’t one song that I don’t like. I am not a classically trained musician or a classical buff at all and I’m writing as a fan of a massive range of genres, classical being 1 that I do really appreciate. The music is amazing, and Karamazov’s talent is explicitly displayed in the instrumental Forlorn hope fancy. Together with Sting’s amazing vocals, which he says was a challenge for him, especially for Weep you no more sad fountains, these songs are carried with real eminence. The original album ends with In darkness let me dwell which Karmazov calls “The greatest song ever written in the English language” and was the first Dowland song Karamazov performed for Sting.

For this 2008 Australian and Asian tour special edition there are 3 bonus tracks - Fields of gold; which really fits in well with lute backing, Message in a bottle - live and Have you seen the bright lily grow - live. The live recordings, arguably have more life and vigour than the originals and sound just as great.

This is an incredible project and Sting has shown his versatility as a musician and singer with this masterpiece. I have a lot of respect for Sting because he respects the history of music and that is clearly depicted in this beautiful tribute to these 400 year old compositions. It's far more than just a cover album that's for sure!
続きを読む
6人のお客様がこれが役に立ったと考えています
違反を報告
レビュー を日本語に翻訳する

Nicholas Casley
5つ星のうち4.0 "Hark, you shadows that in darkness dwell"
2009年6月28日に英国でレビュー済み
Amazonで購入
I prefer `classical' music to rock, but am not a lover of John Dowland's compositions; I prefer Sting's! So please bear this in mind when reading what follows. Usually the classical/rock crossover leads to neither side loving the result, but sometimes it does work, as here, largely because I think Sting has a genuine love and feel for the work of John Dowland; he no longer has to do this thing for kudos or for celebrity.

Sting does the vocals, but the vast majority of the lute work is done by Edin Karamazov. Of the twenty-three tracks, five are instrumentals and eleven are songs. The remaining seven tracks sees Sting interspersing the songs by reading extracts from Dowland's letters as he travelled around Europe.

Many listeners will be perhaps shocked at the soundworld of the first song, for it is not really what is expected. And yet, shock soon gives way to respect at the raw and not-so-raw techniques involved, such as Sting's harmonising with his own voice. One of the songs is by Robert Johnson, a younger contemporary of Dowland, and this definitely has a different feel to it.

The more I played this disc, the more I liked it (the exact opposite of most pop/rock), for the more I heard, the more I explored: there is here surprisingly much to discover for a disc featuring just two artists. Sting and Edin Karamazov have convinced me that indeed Dowland's songs have a feel for the modern-day, so it would have been interesting if Sting had done an accompanying disc where he performs the eleven songs in a modern setting.

There are good illustrated sleevenotes provided, outlining the history of this project. These include also the lyrics.
続きを読む
違反を報告
レビュー を日本語に翻訳する

D.Austin
5つ星のうち5.0 A courageous effort from an old musical master!
2012年1月12日に英国でレビュー済み
Amazonで購入
Many true Sting fans will know Sting wanted to make this album for over 20 years, thus its seasoned well in his soul for a great many years. A great CD for late night feasting, lovemaking or just doing the knitting! I'd love to see Sting do a CD of Shetland folk songs...(keep up the courageous streak Mr Sumner!)
続きを読む
違反を報告
レビュー を日本語に翻訳する
すべてのレビューを参照します
Amazonプライム会員ならお急ぎ便、日時指定便が使い放題
さらに、映画もTV番組も見放題。200万曲が聴き放題 。クラウドに好きなだけ写真も保存可能。
> プライムを無料で試す