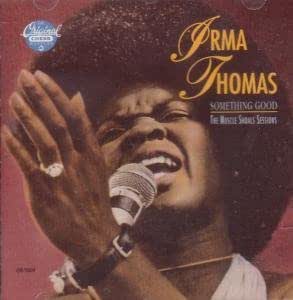 L. Brown
5つ星のうち5.0 An Absolute Soul Gem!
2008年1月3日 - (Amazon.com)
形式: CD
Chess Records signed Irma Thomas in 1966 and almost immediately sent her to work with producer Rick Hall at his Fame Studios in the world famous Muscle Shoals, Alabama. Thomas recorded over a dozen tracks while backed by seasoned in-house rhythm and horn sections, plus Spooner Oldham on keyboards. Of the tracks she recorded, Chess released only three 45s, including Otis Redding's "Good To Me", the only song from these sessions to crack the Billboard charts. Unimpressed - and despite some fine unreleased material - Chess decided Thomas was a poor seller and scrapped plans to release an LP by her. She did one more session for the label in Chicago (I'm not sure if it was ever released), then she and the label parted ways.

That none of Irma's Muscle Shoals releases connected with the public is puzzling (lack of marketing was only part of the problem). Even worse, most of her work for the label went unissued for over 20 years. The combination of her mature, soul-saturated delivery, coupled with a raw vocal grittiness, and the tight, could-only-happen-in-Mussle Shoals perfection of the band made for some of Irma Thomas' most satisfying performances. As she stated, even though the band may not have been from New Orleans, it delivered its own elegant, yet understated, funk and soul bravado to the songs, allowing Irma to connect with the material in a way most singers can only dream about. Of course, it certainly helps that the songs were of high quality, from writers such as Penn/Oldham, Otis Redding, Paul Kelly, Oliver Sain, and Goffin-King.

"Cheater Man" was Thomas' first Chess single, recorded June 6, 1967. This CD features an alternate mix of the song from the CD, Something Good/The Muscle Shoals Sessions that Chess/MCA put out in 1990 (also now out of print). I'm hard-pressed to think Irma has done better pure soul than on the best of these tracks from Muscle Shoals. She's done plenty of exceptional, expressive singing, both before and after, but these sessions were as special as they come. For pure unbridled soul, take a listen to the devastating "Here I Am, Take Me". One listen and you'll sing the praises of Irma Thomas forever.