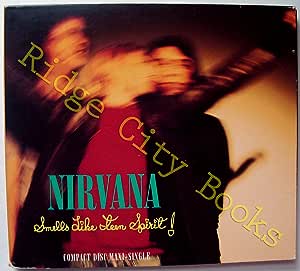 2. Even In His Youth (Previously Unreleased)

Deleted in the U.S., this is the CD single for the song thatinstantaneously & singularly changed the face of modern/alternative rock. Features 'Smells Like Teen Spirit' (Edit)and the non-album tracks 'Even In His Youth' and 'Aneurysm',both previously unre

Polishguy
5つ星のうち2.0 Wrong Box
2014年9月27日に英国でレビュー済み
Amazonで購入
I bought it for the cover, which even gave me a hope it could be a digipack. But it arrived with a different cover which only makes me feel I would succeed in graphic design ;).

wellwellwell
5つ星のうち5.0 Oh, "Smells Like Teen Spirit" is on this? Hmmm...
2003年4月3日にアメリカ合衆国でレビュー済み
Amazonで購入
I will say it from the start: buy this, if for anything, for the extraordinary b-side which is track two. We all know "Smells Like Teen Spirit" is Nirvana's most popular song. But if you are looking for the same sound as that smash single provided, you won't find it with these two bonus songs. Both "Even In His Youth" and the single version of "Aneurysm" are coarse, unpolished songs that wouldn't quite fit in with Nevermind`s sound. Nevertheless, this CD-single is a must-have for the true Nirvana fans; thanks to the two extras. I cite "Even In His Youth" as one of the best Nirvana songs ever; as it features some of the most creative lyrics Kurt ever wrote. The line `if I die before I wake / I hope I don't come back a slave' is scornfully brilliant and noteworthy. It would've fit in, more appropriately, on In Utero. Many other reviewers have said time and time again this same thing. And although "Smells Like Teen Spirit" is easily the band's finest radio hit, I don't doubt the fact there's a few hundred fanatics who'd rather hear "Even In His Youth" over and over and over instead of track one twice. Those people are the true fans.
This single looks like it's only available used, but pick it up anyways. Still, if you're an average Nirvana fan (meaning you only like Nevermind) who doesn't enjoy the sounds of In Utero, Incesticide or Bleach, then you won't get much out of listening to this. However, if you are in fact a dedicated Nirvana fan and/or are looking for hard-to-find songs, this is the ideal place. "Even In His Youth" alone makes this compact disc 4 stars; and the rare edition of "Aneurysm" boosts it up to five. Oddly enough, the title track here has no bearing on the greatness of the CD. If you only want that song, buy Nevermind.
続きを読む
16人のお客様がこれが役に立ったと考えています
役に立った
フィードバックを送信中...
フィードバックをお寄せいただきありがとうございます。
申し訳ありませんが、お客様の投票の記録に失敗しました。もう一度試してください。
違反を報告
レビュー を日本語に翻訳する