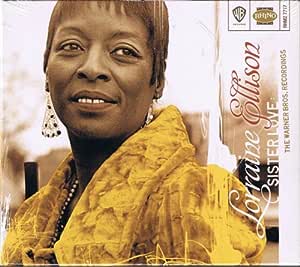 Three CD collection from the Soul/Gospel vocalist. Deeply steeped in Gospel, Lorraine Ellison possessed a vocal range, power and intensity that was maybe TOO intense for the mainstream, and thus only scored three chart hits during her career. She's well known to Soul fans, though, especially for the three classic albums she made for Warner Bros. in the `60s and `70s, Heart and Soul (1966), Stay with Me (1969) and Lorraine Ellison (1973), which appear here along with a full 24 unreleased tracks including 14 newly discovered demos from 1972! Soul expert extraordinaire David Nathan produces and annotates. Rhino Handmade.

Rory Hennessy
5つ星のうち4.0 Interesting
2013年11月17日に英国でレビュー済み
Amazonで購入
I of course love Stay with Me and bought the 3 cds on the strength of that track. I was sold like new and it certainly was as it was still in the shrink wrap.
The music is mix of gospel, jazz and blues. There are some glimpses of the emotion of Stay with Me but do not expect it all to be that good.
Reading the sleeve notes you can see how Lorraine was never really given the songs she deserved and was shunted into the record company's idea of where she should be headed.
So a mixed bag and good value for what I paid to get it from NY.

Donald E. Gilliland
5つ星のうち3.0 Great voice but weak material and production
2017年4月23日にアメリカ合衆国でレビュー済み
Amazonで購入
I truly wished I had enjoyed this collection more than I did, but count me in the camp that says Lorraine Ellison's voice was "too intense." That about sums it up for me. A voice that was a bit too dramatic and histrionic, coupled with songs that had too lush of a production and weak choice of songs.

Ellison certainly possessed a great voice, but perhaps she should have reigned it in a bit more often. After all, sometimes less it more. But Ellison (or her producers) apparently didn't feel the need for any restraint and she cut loose and showed her stuff with joyful abandon. Whew! It actually made me tired just listening to her constant wailing. In the liner notes, compiler David Nathan accurately summed up the "problem" that some people (like me) had with Ellison: "...her incredible vocal power, range and intensity may have been a little too much .... when it came to delivering unbridled passion and wild emotion; she simply didn't, couldn't, or wouldn't 'contain' herself when it came to singing."

Another problem with many of these songs is that they are too over-produced, relying on lush string arrangements that sometimes clash with Ellison's own booming voice. Then there are the songs themselves. A few truly terrific songs, of which there is no doubt, but also far too many weak cover versions of much-done songs such as "If I Had a Hammer", "Ain't That Peculiar", "He Ain't Heavy, He's My Brother', "I'll Fly Away", and "Stormy Weather." Why bother singing this dreck? Even seemingly interesting choices to cover such as "Many Rivers To Cross" and Van Morrison's "Caravan" end up being disappointing, at least to my ears.

So there you have it. For those that enjoy their loud and brash divas, Lorraine Ellison may be right up your alley. But for someone like me, that puts more meaning in the songs themselves, there isn't a whole lot to offer on this collection. That said, the third disc in this compilation, the "demos" is actually pretty interesting. It sounds much more "natural" and thankfully doesn't have any dreaded string arrangements to annoy me.

Owen
5つ星のうち5.0 Lorraine Ellison lives!
2011年3月24日にアメリカ合衆国でレビュー済み
Amazonで購入
I thought Lorraine's Mercury record "I dig you baby/Don't let it go to your head" was so great that I bought everything else she made, and I was disappointed every time. "Stay with me," though a cult favorite, is bombastic and hideously overproduced. Her 3 LPs were mostly junk, and the last one was so hard to find that I finally bought a prerecorded cassette of it at Pyramid Records in Minneapolis (a fabulous store, the stuff of legend, but that's another story).
Although I found almost nothing good among Lorraine's Loma/Warner Bros. records, I always loved her and believed that she was capable of doing wonderful things if only somebody would help her with decent songs and arrangements and backings. Well, nobody ever did, but she made her great record after all, all by herself, and it's the third disc in this set.
Disregarding the final track, a curio that should have been left in the can, Lorraine's disc of demos is one of the greatest soul albums you'll ever hear. She rips her heart out and throws it at you. "Same old thing called love" is deep as it gets. Linda Jones is the only other singer who can touch it. There's nothing better: there couldn't be.
続きを読む
4人のお客様がこれが役に立ったと考えています
役に立った
フィードバックを送信中...
フィードバックをお寄せいただきありがとうございます。
申し訳ありませんが、お客様の投票の記録に失敗しました。もう一度試してください。
違反を報告
レビュー を日本語に翻訳する