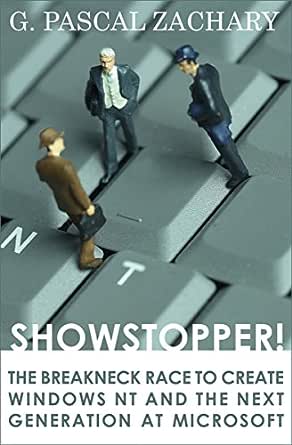 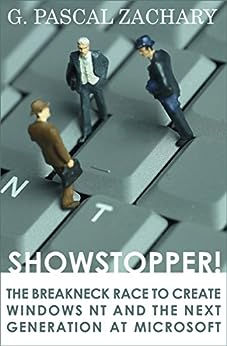 Showstopper!: The Breakneck Race to Create Windows NT and the Next Generation at Microsoft (English Edition) Kindle版

G. Pascal Zachary is a journalist, author, and teacher. He spent thirteen years as a senior writer for the Wall Street Journal (1989 to 2001) and writes regularly for newspapers, magazines, and journals, including Salon, Foreign Policy, the San Francisco Chronicle, the Wilson Quarterly, Fortune, and AlterNet. Zachary concentrates on African affairs. He also writes on globalization, America’s role in world affairs, immigration, race and identity, and the dysfunctionalities and divisions in US society.
Zachary teaches journalism at Stanford University. He has lectured on various campuses, including those of MIT, Caltech, Puget Sound, UC Berkeley, Connecticut, and Tufts. He is a fellow at the Institute for Applied Economics at Johns Hopkins in Baltimore and a senior associate at the Nautilus Institute in San Francisco. Currently, he is writing a book on the political economy of sub‑Saharan Africa and a memoir of his marriage to an African, the Igbo hair braider Chizo Okon. They live with their children in the San Francisco Bay Area. His personal website is www.gpascalzachary.com and he blogs at www.africaworksgpz.com.
--このテキストは、paperback版に関連付けられています。

Shaarad
5つ星のうち5.0 Fun and relatable
2017年3月25日にインドでレビュー済み
Amazonで購入
An interesting read, not divulging in technical details, but concentrating on the people and work relationship between the team members who pulled off the mammoth project. If you are into software development, you will very likely connect to the time and situation they went through. Also the book tells about the initial company culture at Microsoft and how it evolved from being a startup-ish company to an enterprise. Having experienced the company culture first hand, I could relate to a lot of things over there and it was a fun experience.
続きを読む
違反を報告
レビュー を日本語に翻訳する
すべてのレビューを参照します
click to open popover
Amazonプライム会員ならお急ぎ便、日時指定便が使い放題
さらに、映画もTV番組も見放題。200万曲が聴き放題 。クラウドに好きなだけ写真も保存可能。
> プライムを無料で試す