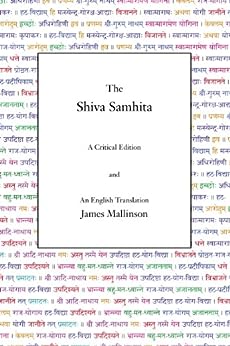 Composed over five centuries ago, the Shiva Samhita is one of the most celebrated root texts of Hatha Yoga. It includes beautiful teachings found nowhere else. This edition contains the original Sanskrit, properly edited and printed for the first time, and a new, accurate translation thereof. It also features photographs of the asanas and mudras described therein.

Residing in Oxford, England, James Mallinson is a graduate of Eton and Oxford, holds a master's from the School of Oriental and African Studies, and returned to Oxford University for his doctorate.

"James Mallinson has just produced the most reliable Sanskrit edition and English translation of the Shiva Samhita available. I praise his painstaking and learned work, which is well complemented by a crisp, informative, no-nonsense introduction. The accuracy and readability of this book make it of great interest to anyone working on Yoga and related disciplines."

"James Mallinson has just produced the most reliable Sanskrit edition and English translation of the Shiva Samhita available. I praise his painstaking and learned work, which is well complemented by a crisp, informative, no-nonsense introduction. The accuracy and readability of this book make it of great interest to anyone working on Yoga and related disciplines."
--Elizabeth De Michelis, Oxford University, Author of A History of Modern Yoga

"One of the sacred books of Hinduism, the Shiva Samhita was composed more than five centuries ago and is considered a fundamental text of Hatha Yoga. Recording beautiful spiritual teachings found nowhere else, the Shiva Samhita is translated from the original Sanskrit by James Mallinson, providing western readers with a new, accurate, modern translation of this ancient religious text. Featuring photographs of the asanas and mudras described by the text, the Shiva Samhita is a strongly recommended, core addition to personal, academic, and community library Hinduism Studies, Yoga Studies, and World Religion Studies reference collections and supplemental reading lists. Also very highly recommended from YogaVidya.com are two other Hindu Studies titles: James Mallinson's translation of the Gheranda Samhita and Lars Martin Fosse's translation of the Bhagavad Gita."
--Midwest Book Review

"I recommend your publications to every serious student of Yoga that I come across. The translations are obviously meticulously done. The introduction in each text establishes clarity regarding the various source materials for each translation, as well as the careful thought process that has gone into the translation. It is refreshing, as it comes across as genuine. No agenda is attached to it other than bringing out good translations from which we can study. You and your team have brought dignity and integrity to these translations."
--Don Diggs, Center for Health and Wellness

James Mallinson is a graduate of Eton and Oxford, holds a master's from the School of Oriental and African Studies, and returned to Oxford University for his doctorate. --このテキストは、paperback版に関連付けられています。
続きを読む

Customer
5つ星のうち2.0 a 'critical' review
2020年7月20日に英国でレビュー済み
Amazonで購入
James Mallinson is a Sanskrit scholar but I must confess I am less inspired by his translations to feel that he has quite the same grasp of the essential teachings of yoga in his choice of English. That's a strong statement of course... 'yoga' today is exemplified as a popular sport, often practiced in groups, and marketed with a stereotypical image of a lithe young white Western woman. I am sure many people benefit from it, including Mr Mallinson, who has included such pictures.

This is not a 'critical edition' in the sense of an academic edition, and I'm sure Mr Mallinson knows the difference. It is critical in the sense that he criticises the standard Srisa Chandra Vasu version and also the critical edition of the Kaivalya Dham Yoga Research Institute for not applying 'critical rigor' –– and so, he says, he re-edited it. His introduction (2007) directs the reader to his website for information about adopting different readings and the reasons for them, yet when I visited his website (2020) I wasn't able to find them.

Now there are many reasons for different readings. The Monier-Williams dictionary has several pages just on the definitions of the word 'yoga'. But here is where Mallinson clearly doesn't maybe have the benefit of generations of Indian Yoga culture behind him, for which he must be forgiven. even if Chandra Vasu had it and which the above Institute quite possibly has. In his eagerness to give an 'unvarnished' translation, many subtleties have been omitted and dubious substitutions made. A rather humorous example occurs where he suggests the "yogi who worships the guru's lotus feet eats the products of the cow". Whether that is an acceptable literal translation or not is moot: compare a better translation: "The Yogi, worshipper of the lotus-feet of his Guru, should in order to obtain quick success in Yoga drink milk or nectar in this way."

Failing to translate texts such as this with the much needed eye to their spiritual ramifications seems to me to be courting error; "milk" and "nectar" are found throughout the traditions in question and are intrinsically linked symbolically to the very mudra which he is translating (and justifiably criticising Chandra Vayu for omitting), depriving the reader of much of their value. There seems to me a vast number of similarly rather specious translations in this Mallinson version, whatever its other qualities

I have similar reservations about Dr Mallinson's version of Gheranda Samhita with its opening words of "bowing politely" to Gheranda. Those familiar with the real Indian tradition in these matters will doubtless raise an eyebrow.

On the plus side, Mallinson has produced a cheap and cheerful booklet that doesn't fall to bits as quickly as some of those produced in India. Perhaps a future edition could include the transliterations – then the average reader could perhaps more easily understand, when Mallinson (vs.1) speaks of the "Lord" saying "there is only one eternal true knowledge" (vs.1) whether he also means, as in Vasu, "Jnana alone is eternal". His translations of Karma merely as "action" or Akasa/ether as "space" strike me as likely to mislead, when most people have at least a passing idea of what the Indian word means in these cases (and then for Dr Mallinson to say that the one attribute of space is "sound" doesn't actually make very good sense).

Mallinson has added to the available English versions of Shiva Samhita but what really is needed is a proper academic edition. Until then, could I politely suggest serious students get hold of the three versions commonly available (Mallinson, Vasu, Vishnuswaroop) and compare them stanza for stanza, preferably with a Monier-Williams on hand, and see for yourself which seems the most 'reliable'.

This is made easier, whatever the merits or demerits of each, by Swami Vishnaroop's version, which includes both the Sanskrit, the English transliteration of the Sanskrit (omitted by Mallinson and Vasu) and also the vajroli mudra which Vasu omitted (though still no index). From there, some sort of concordance could be assembled, mss sources identified, and a transparent comparison of the choices made in translation – whether deduced from literary analysis and or yoga philosophy.

Then at last we might have something definitive and produced under the aegis of an academic publishers. Mallinson has produced a popular edition: whether it is a 'reliable' step towards being definitive I leave to the reader.