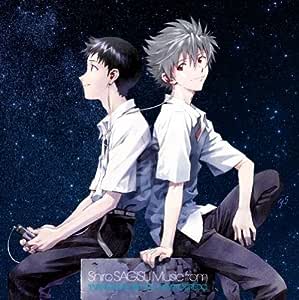 Bsmithscolaro
5つ星のうち5.0 The best soundtrack I've heard all year
2014年1月1日にカナダでレビュー済み
Amazonで購入
This soundtrack is amazing! Shiro Sagisu really tried some unexpected experimental pieces this time around and they're all fantastic. The first disk alone can make any day feel entirely epic, if you loved the original series and the Rebuild films I recommend this highly! Can't wait for Q to be released in North America, it was such a great movie.
続きを読む
1人のお客様がこれが役に立ったと考えています
役に立った
フィードバックを送信中...
フィードバックをお寄せいただきありがとうございます。
申し訳ありませんが、お客様の投票の記録に失敗しました。もう一度試してください。
違反を報告
レビュー を日本語に翻訳する

Vinylvenator
5つ星のうち5.0 MAXIMUM SAGISU
2017年6月21日にアメリカ合衆国でレビュー済み
Amazonで購入
I think Shiro Sagisu might have set a bar for anime music with his work on 'Neon Genesis Evangelion' - a bar he continues to raise/extend with his following works, from 'Bleach' to 'Kare Kano' to 'Shin Godzilla' - and appropriately, it culminates here, in his work for the Evangelion Rebuild films, particularly this score for the third feature film.
Sagisu has probably become most famous for his grand action themes, often backed by select choir; and this music is present in full force for this soundtrack. The first five tracks are a nonstop feast of orchestral action goodness - mostly re-purposed cues from Sagisu's work on the climax of 'Nadia: The Secret of Blue Water', upgraded to STAR WARS-caliber symphonic power. This epic musical scope peaks late into the first CD with "The Wrath of God in All Its Fury", which may be my personal favorite piece of music EVER written by master Sagisu. The choir and orchestra are also regularly accompanied by choice electrical instruments, which largely compliment the musical cues rather than distract from them.
Eva 3.0 isn't all high-octane intensity, though; the score regularly alternates between action pieces and much more simple, melancholy tunes. These pieces are most prevalent on the 2nd disc, where fans will be surprised by the return of a certain ominous cue from the original show, alongside the all-new "Famously" and "theme Q" motifs, which certainly earn their spots among the iconography of Evangelion sound.
The soundtrack for Eva 3.0, overall, tends to alternate between these two moods. While this is hardly one of the most varied works of his career, Shiro Sagisu has the mood of this story to a T, presenting what is probably one of his most beautiful, emotionally-laden scores yet. Fans of Shiro Sagisu, Evangelion, and anime music in general should add this album to their collection without hesitation.
I cannot wait to hear what's in store for 3.0+1.0!!