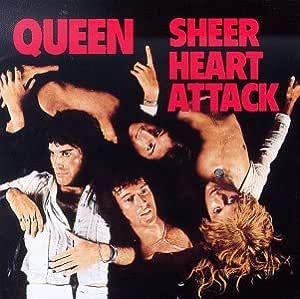 Sheer Heart Attack is a Queen album that has something for nearly everyone. There's glam, progrock, guitar pyrotechnics to spare (check out Brian May's shape-shifting performances on "Brighton Rock" and "Flick of the Wrist"), proto-speed-metal ("Stone Cold Crazy"), and Queen's unique brand of campy humor ("America's new bride to be / Don't worry, baby, I'm safe and sound," Freddie Mercury declares on "Now I'm Here," a Queen concert staple). The group takes a rocked-up turn at ragtime on "Bring Back That Leroy Brown" and downshifts memorably on the spare piano-and-voice interludes "Lily of the Valley" and "Dear Friends." Best of all is the wicked rock-and-harmony showcase "Killer Queen," the group's first international smash. If you need a reminder of everything that was right about rock's old guard before punks stormed the gates, look no further. --Daniel Durchholz

richard pendleton
5つ星のうち5.0 essential classic.
2016年10月2日に英国でレビュー済み
Amazonで購入
outstanding album from queen's golden era. opening with the classic brighton rock complete with brian may's solo, influenced by jimmy pages' dazed and confused. this is then immediately followed by the noel coward inspired killer queen. with great guitar laden tracks such as now i'm here, flick of the wrist and the 2 minute masterpiece that started thrash metal, stone cold crazy. there's a great singalong in , in the lap of the gods, big band/honky tonk in bring back that Leroy brown and Freddie's beautiful lily of the valley. the bonus ep contains bbc sessions and a couple of live tracks of versions from this wonderful album. essential classic.
続きを読む
3人のお客様がこれが役に立ったと考えています
違反を報告
レビュー を日本語に翻訳する

Mr. J R Barton-Butcher
5つ星のうち5.0 This is an amazing album. Totally underrated
2015年3月28日に英国でレビュー済み
Amazonで購入
This is an amazing album. Totally underrated, and certainly in the shadow of "A Night At The Opera". A shame really, as this album has loads of experimentation, soothing melody, thumping rock, and musical inventiveness. On the back of Queen and Queen II, both superb albums, Sheer Heart Attack signified a subtle evolution in musical direction. The dramatic fantasy of Queen II was replaced by songs which touched upon the realities of life. My personal favourites are Tenement funster and Flick of the Wrist. These two tracks merge into one another. Tenement funster uses the beautifully course yet smooth shrill voice of Roger Taylor to tell the story of a young chap in a mundane environment, but with a taste for the high life. It has an element of "drowse" from the later album, "A Day at the races", aspiration and dreams above the current situation. This track then merges almost seamlessly into "Flick of the Wrist". This track, apparently about a former acquaintance (legal !!!) is amazing. For me, the interplay of the high, whining, wailing, almost middle eastern melodies alongside the bassy, thumping rhythmic undertones is genius.
But there's plenty more on here. John Deacon hits the mark with "misfire". Call it hippie, call it camp, call it just jolly...It's a celebration of love and happiness, and full volume it makes you smile. Following this is "bring back Leroy Brown', a truly lovely Freddie showtime special with ragtime jazz and a sense of fun. The 'Lap of the Gods' duo are also Freddie at his most creative, and with Roger's unmistakable shrill melodic wailing in the background there is a real sense of drama. Bundle in the known hits of "Killer Queen" and "Now I'm Here", and you have a truly memorable album. I've been a fan for more than 35 years, and I STILL give this album a regular listen! Enjoy!
続きを読む
6人のお客様がこれが役に立ったと考えています
違反を報告
レビュー を日本語に翻訳する

Maverick
5つ星のうち5.0 The Queen Quadrilogy - Episode 1
2008年4月10日に英国でレビュー済み
Amazonで購入
The 1970's was undoubtedly Queen's most prolific creative period and the Quadrilogy I refer to is of course virtual - from Sheer Heart Attack, A Night At The Opera, A Day At the Races and News Of The World - although the second and third albums were destined to be closely linked.

Sheer Heart Attack represented a major change in step for Queen - from the highly progressive and experimental Queen and Queen II with their very limited commercially viability in terms of self-promotion (singles).

The change in step still featured an incredibly diverse mix of styles and songs - together with a number of clearly linked songs (Tenement Funster, Flick of The Wrist, Lily Of The Valley) - but with considerably more scope for singles. Queen chose but two - Killer Queen (an obvious and hugely successful choice) and Now I'm Here - but scope remained - with the very catchy John Deacon penned-pop number 'Misfire' Roger Taylor penned and vocalled 'Tenement Funster' and dare I say the pastiche 'Bring Back That Leroy Brown' (had the record companies been ready to take a chance...)
What remains is an album that feels like a worthy predeccessor to Queen's 'Sgt Pepper' - A Night At The Opera. And in terms of success - it marked a major change in step for the next 3 (yes 4 albums in just 3) years output which was of course supported by Queen's highly polished and prolific touring schedule. Again - it defined 'Album' for me - in that it was not merely a collection of singles or songs - but a marvelous emotional journey through a cascade of different flavours - from the hard but very technical Brighton Rock, the classic Killer Queen, warm blues-rock Tenement Funster through the highly futuristic and bizarre In The Lap Of The Gods, the ultra modern (for it's time) Misfire and more Gods(revisited...)with the it's hugely anthemic 'Wo Wo La La La!'

If you are to own only 4 Queen Albums - Sheer Heart Attack should definitely be included.
続きを読む
13人のお客様がこれが役に立ったと考えています
違反を報告
レビュー を日本語に翻訳する

Mr. Ross Maynard
5つ星のうち5.0 Queen at the height of their powers
2008年3月29日に英国でレビュー済み
Amazonで購入
The early 1970's were a really great time for British rock music with Queen, Bowie and many others at their height of their powers. I was only eight at the time but I still remember "Killer Queen" on Top of the Pops - Freddie Mercury in fur coat, make-up and black nail varnish. Mindblowing ! 1974 saw the two best Queen albums - this one and Queen II. Personally I prefer the full glam rock experience of Queen II, while Sheer Heart Attack is more commercial. There are some great songs here including probably my favourite Queen track of all - Brighton Rock. Pure genius. For the real Queen experience you need Sheer Heart Attack and Queen II. Don't miss it !.
続きを読む
2人のお客様がこれが役に立ったと考えています
違反を報告
レビュー を日本語に翻訳する

John Kelly
5つ星のうち5.0 Queens best.......maybe?
2011年6月28日に英国でレビュー済み
Amazonで購入
This was one one of the first Queen albums I heard way back in the 70's..always liked it and bought the vinyl a few times over the years and then the first remaster and now we get for the first time a decent remaster. I say decent but it is in fact quite superb to my ears. This being Queen's third album for me is where they found theyre style & sound. There are some wonderful performances and songs to die for on this album. A lot of people say the Night at the Opera is their best but for me that one doesn't quite come near as this one.

As for the bonus disc well...as has already been said we haven't been spoiled which is a shame as there are many outakes that could & should have been added..