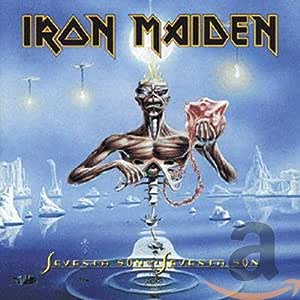 By the release of this landmark eighth album, Iron Maiden had settled into what's generally considered their classic line-up. With Bruce Dickinson, Dave Murray, Adrian Smith and Nicko McBrain operating at the very peak of their form, band mastermind, main songwriter and bassist Steve Harris decided to extend the Maiden remit yet further by unveiling their very first concept work. Contemporary critics scoffed in the face of such a grandiose gesture, but Seventh Son Of A Seventh Son spawned no fewer than four British hit singles and remains an indomitable highlight of the Maiden's illustrious career. From the strident commercial metal of "Can I Play With Madness", through the keyboard-enhanced epic bombast of the title track, to the fretboard intricacies and chest-beating machismo of "Only The Good Die Young", Seventh Son finds Iron Maiden at their most assured and creative. Essentially, this is a spectacular example of 22-carat heavy metal. Ian Fortnam

wdturning40
5つ星のうち3.0 Iron Maiden's best album....on better vinyl at last. Just not great vinyl.
2019年6月15日に英国でレビュー済み
Amazonで購入
One of my first teenage album purchases on its original release. The original is their one and only album to have no weak songs. I love the music synthesizers or not. The original like many 80's albums was released on cheap paper thin vinyl with shockingly poor sound. This new release remedies that with a better 180g pressing. It sounds a lot better but dont expect an audiophile quality. Ive put it through my cleaner twice and the surface noise is much reduced on quiet sections but why does it need to be there at all? Audiophile pressings seem to cost double so perhaps an element of what i paid for. The artwork is still great on my original but this new one is like a cheap colour photocopy of it and the red green balance is definately off. Good....but not the luxury i had craved. Not special enough to dispense with the spotify offering.
続きを読む
1人のお客様がこれが役に立ったと考えています
違反を報告
レビュー を日本語に翻訳する

This pressing sounds great - the EQ seem a little punchier than the original pressing and certainly wider than the CD master.

Cover artwork is very well reproduced - although the front cover is a little "grainy". The inner sleeve is good - but the picture of Eddie is a little brighter and not as well defined as the original release. The disk labels are nicely reproduced too.

Physically the disk is flat and feels great - it sits firmly on the turntable and there is no noticeable warbles of flutters.
続きを読む
3人のお客様がこれが役に立ったと考えています
違反を報告
レビュー を日本語に翻訳する

O. J. Mcdonnell
5つ星のうち5.0 Yet another classic!
2011年1月4日に英国でレビュー済み
Amazonで購入
Throughout the 1980's iron maiden had been releasing classic metal albums one after the other, and this album is no exception, this cd is packed with killer guitar riffs and solos along with plenty of superb vocal work from Dickinson. I tend to ignore the whole concept album part of it because firstly the concept isn't that interesting and I'm constantly distracted by the fantastic music.
The highlights of this album for me have to be moonchild with its cool buildup at the start of the song, the epic anthem can I play with madness, and the truly awesome the evil that men do, with its inspiring chorus.
続きを読む
2人のお客様がこれが役に立ったと考えています
違反を報告
レビュー を日本語に翻訳する

EAG
5つ星のうち5.0 A Most Interesting Album
2012年3月11日に英国でレビュー済み
Amazonで購入
'Seventh Son of a Seventh Son' is one of the better albums released by Britain's favourite Heavy Metal group. Although differing slightly in its compilation and execution to its predecessors, it is certainly well worth having, even if you don't like Iron Maiden so much.

Being a rather short album for Iron Maiden (it's an 8 track album that lasts for approx. 44 minutes), you expect a lot of quality encased in that plastic box. Luckily, you get it. Some of my favourite Iron Maiden tracks come off of this disc, two of which make it onto the 'Best Of' album 'Somewhere Back In Time' - 'Can I Play With Madness' and 'The Evil That Men Do'. The best track on this album is, to me in the least, 'Can I Play With Madness'. It's unusual in the sense that it's actually less than five minutes long while managing to impart a whole story through its lyrics.

The actual style of the songs in the album is fairly different to others. For a start, there's a keyboard at work. This is obvious from the first track ('Moonchild') onwards. It actually adds a rather welcome softer undertone to the music, which is something wholely unexpected, as Iron Maiden have always been about making their songs the best they can with what they have. As such, the tracks in the album are more pop than any I've heard before. They seem a lot softer than those in, say, 'Piece of Mind', but it really fits with the mood of the album.

While the guitarwork in this album is slightly diminished by the use of a keyboard, that doesn't mean that they hold back on the searing solos. As well as this classic display of Heavy Metal prowess, we actually catch some of the softer guitar parts in songs such as 'Infinite Dreams' and 'Seventh Son of a Seventh Son', but, needless to say, the break is but a brief interlude to some real Maiden madness.

In conclusion, this album is a great buy. For the price that Amazon offers, it's almost like robbery to accept the price they offer. As such, I am very glad to have acquired such a fantastic album for so small a price. Classic Maiden at less than five quid - who could ask for more?
続きを読む
1人のお客様がこれが役に立ったと考えています
違反を報告
レビュー を日本語に翻訳する