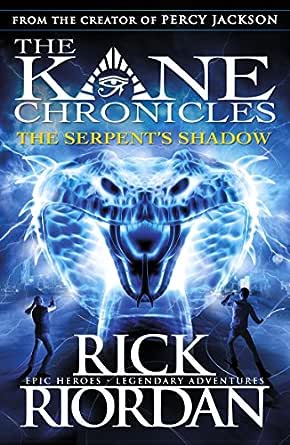 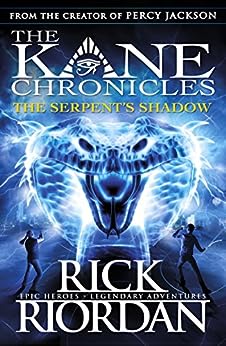 The Kane Chronicles: The Serpent's Shadow is the final thrilling instalment in award-winning author Rick Riordan's Kane Chronicles trilogy. Is their inherited magic enough to battle against the most powerful mythical forces that Egypt's gods have to throw at them?

CARTER AND SADIE KANE, descendants of the magical House of Life, are in pretty big trouble.

Despite their bravest efforts, Apophis, the giant snake of Chaos, is still threatening to plunge the world into eternal darkness. Now the Kanes must do something no magician has ever managed - defeat Apophis himself. No pressure there then.

Battling against the forces of Chaos, their only hope is an ancient spell - but the magic has been lost for a millennia. Will they find the serpent's shadow, or will they be led to their deaths in the depths of the Underworld?

Praise for The Kane Chronicles: The Serpent's Shadow:

'Storytelling that will get readers hooked' - Philip Ardagh, The Guardian

Rick Riordan is the award-winning writer of the Percy Jackson series, The Kane Chronicles and the Heroes of Olympus series. He lives in San Antonio, Texas, with his wife and two sons. Percy Jackson and the Lightning Thief was the overall winner of the Red House Children's Book Award in 2006, and made into a blockbuster film starring Sean Bean, Pierce Brosnan and Uma Thurman in 2010. The series has gone on to become a chart-topping success.

***Check out The Kane Chronicles website at www.kanechronicles.co.uk for games, puzzles, author interviews and much more.***

"A rousing adventure with plenty of magic and food for thought."―Kirkus

Tina Walsh
5つ星のうち5.0 the bad guys get punished and all is well
2015年1月19日に英国でレビュー済み
Amazonで購入
Book 3 in Kane Chronicles. Carter and Sadie Kane and their trainees are getting ready to face the god Apophis, Lord of Chaos. They need a special item, hidden in a touring exhibition of Egyptian artefacts on view in a Texas museum. Unfortunately, the Book of Apophis, the fifth and last copy written by the magician Setne is destroyed and there is a massacre, which is blamed on the Kane`s.

The balance between Ma`at and Chaos must be restored, which means Ra the Sun god has to be found and resume his nightly journey through the sky. Bast the cat goddess, who had been bound into Sadie`s cat Muffin,after being freed from her endless battle with Apophis tells them she has asked an old friend to help out while she returns to see how close Apophis is to feeing himself.

Starting their journey in London for Sadie`s birthday, disasters ensue, from possessed grandparents and a stand off on Waterloo Bridge, then a limo ride to St Petersberg with Bes the dwarf god in spedos before the Egyptian Queen barque through the land of the dead passing through each "House" in turn, facing challenges on the way.

Of course things work out, the bad guys get punished and all is well.

J. L. Birchall-Mann
5つ星のうち2.0 Not up to the usual standard
2014年4月27日に英国でレビュー済み
形式: ペーパーバックAmazonで購入
Red Pyramid (the first book) was purchased because I couldn't get hold of the Percy Jackson book I needed at the time.
Sadly in my opinion this trilogy does not come up to Mr Riordan's expectedstandard.

In the Percy books, we got used to in depth characters, good continuity in the story lines, plenty of descriptive narrative taking us from place to place & situation to situation.
The Kane chronicles lack much of that. The main characters are irritating and very juvenile, despite supposedly being the next pharaohs of Egypt. They get into a fight/situation/place and whoops, its all over, they won and they are already in the next fight/situation/whatever. They manage to learn all sorts of new magic (of which they supposedly have no previous knowledge) apparently through the ether as there is no description of their lessons/reading etc.

Disappointing given how good the Percy books are

Mrs. L. Lomas
5つ星のうち5.0 great book for kids
2012年10月22日に英国でレビュー済み
Amazonで購入
I bought this book for my youngest son for his birthday, third and final book in the Kane Chronicles series, and so far it hasn't made it to the shelf. Not only did the Birthday boy himself read it but also his brother before they started the series again to read all three a second (and third) time, at the moment there is some sort of competion going on as to first to get to the book gets to read it, involving some compicated rules and 2 bookmarks in the same book. All in all I'd say that it must be a good read, and if they put it down for more than 5 minutes maybe I'll get a chance to find out what the fuss is about.
続きを読む
3人のお客様がこれが役に立ったと考えています
役に立った
フィードバックを送信中...
フィードバックをお寄せいただきありがとうございます。
申し訳ありませんが、お客様の投票の記録に失敗しました。もう一度試してください。
違反を報告
レビュー を日本語に翻訳する

Tamsin
5つ星のうち5.0 Bulls with Freaking Laser Beams!
2012年7月18日に英国でレビュー済み
Amazonで購入
The Kanes are back with this continuation of the Kane Chronicles in a spinning world of madness versus order (Chaos versus Ma-at). As their wild Egyptian magical adventures continue, Sadie and Carter find themselves in more and more precarious and strange situations. Their pursuit to defeat Apophis, the giant snake of Chaos, and stop him from swallowing the sun, takes them on treacherous adventures to find an ancient spell... from Brooklyn House to the Underworld to the Land of Demons and the Sea of Chaos.

Although this book is supposed to be a transcript, I find it hard to imagine Sadie or Carter describing things as they do in the book, so I suppose it is a mixture of transcript and regular writing. However I got over this pretty early on, as it doesn't really matter or affect the story when it comes down to it! Also I really enjoy that we see the story alternately from Sadie and Carter's perspectives. This adds a bit more variety to the book (not that it needs it!).

I have always loved Rick Riordan's characters and this is no exception - the book is bursting with them and they often have wonderful quirky, unusual personalities as well as looks! For example, Bloodstained Blade - demon captain of the Egyptian Queen with a blood-covered double-sided axe for a head, Bes - the crazy hairy dwarf God who always wears Speedos and yells `BOO!' a lot, and Setne - a dangerously sneaky ghost with a nasty streak and as fondness for dressing like the `Ancient Egyptian Mafia'.

Of course, Sadie and Carter are superb characters - I especially love Sadie's rebellious streak - and even though there was the occasional American word that I don't think Sadie would say being English, it was not enough to put me off at all.
I would recommend the series to anyone with an imagination and taste for adventure and the unexpected! Obviously start with the first book:The Kane Chronicles: The Red Pyramid Also if you like these books, another series I have really enjoyed and would recommend, is Candara's Gift: Book 1 in The Kingdom of Gems Trilogy (Accounts of Candara)
続きを読む
8人のお客様がこれが役に立ったと考えています
役に立った
フィードバックを送信中...
フィードバックをお寄せいただきありがとうございます。
申し訳ありませんが、お客様の投票の記録に失敗しました。もう一度試してください。
違反を報告
レビュー を日本語に翻訳する
その他の国際レビューを読み込む

Beth Sweetman
5つ星のうち4.0 Incredible series
2016年8月10日に英国でレビュー済み
形式: ペーパーバックAmazonで購入
Brilliant story. Honestly, Rick Riordan is an incredible author. This series is incredible. Its full of drama and suspense, magic and mystery, humor and love. It has it all. The only reason this doesn't get 5 stars is beacuse I ordered a copy of the book second hand (having already read the series as EBooks) and it was more damaged then the seller lead me to believe
続きを読む
役に立った
フィードバックを送信中...
フィードバックをお寄せいただきありがとうございます。
申し訳ありませんが、お客様の投票の記録に失敗しました。もう一度試してください。
違反を報告
レビュー を日本語に翻訳する

Elodie Perrier
5つ星のうち5.0 Great finale to the series
2013年10月26日に英国でレビュー済み
Amazonで購入
After reading the Percy Jackson series and really enjoying them it took me a while to decide to read the Kane Chronicles, mainly because I feared it would be the same story with different characters or that it wouldn't be as good.

In the end I wasn't disappointed. I greatly enjoyed the whole series and this last book was the perfect epilogue to the story. All questions were answered and issues resolved all through a lot of great adventures and action. As usual it is fast paced and very hard to put down as you just can't wait to find out what happens next.
続きを読む
役に立った
フィードバックを送信中...
フィードバックをお寄せいただきありがとうございます。
申し訳ありませんが、お客様の投票の記録に失敗しました。もう一度試してください。
違反を報告
レビュー を日本語に翻訳する
その他の国際レビューを読み込む

The Cool Cookie
5つ星のうち5.0 Egypt is still in trouble
2013年1月1日に英国でレビュー済み
Amazonで購入
Reviewed by 10 year old son. This is the story of the Kanes still trying to save the world from chaos of Apophis. They way it is written helps you to learn all about the egyptian gods and the way they influenced people long ago. They story is very complex, but if you have read the previous books in this series, you need this one as it is the last one.
続きを読む
役に立った
フィードバックを送信中...
フィードバックをお寄せいただきありがとうございます。
申し訳ありませんが、お客様の投票の記録に失敗しました。もう一度試してください。
違反を報告
レビュー を日本語に翻訳する

awesome dude
5つ星のうち5.0 A good end to the series.
2016年8月28日に英国でレビュー済み
Amazonで購入
I thought, and I'm sure lots of people will agree, that this was the best in the series. There was a lot more action and mystery to this one, I especially enjoyed Setne's character. I'm glad that Bes survived I mean who doesn't like an ugly Dwarf God.
続きを読む
役に立った
フィードバックを送信中...
フィードバックをお寄せいただきありがとうございます。
申し訳ありませんが、お客様の投票の記録に失敗しました。もう一度試してください。
違反を報告
レビュー を日本語に翻訳する