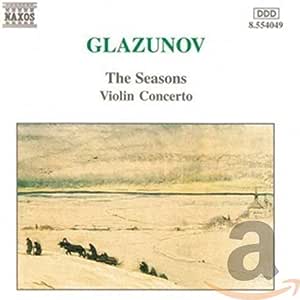 Penperlleni
5つ星のうち5.0 Just buy it
2017年11月20日に英国でレビュー済み
Amazonで購入
My two favourite Glazunov works on a single CD. And can be got used at a very attractive price. And the violin concerto is my favourite recording of all. And The Seasons nearly matches my all time favourite by Robert Irving on Capitol. What are you waiting for???
続きを読む
1人のお客様がこれが役に立ったと考えています
役に立った
フィードバックを送信中...
フィードバックをお寄せいただきありがとうございます。
申し訳ありませんが、お客様の投票の記録に失敗しました。もう一度試してください。
違反を報告
レビュー を日本語に翻訳する

Hugh W
5つ星のうち5.0 Great music
2019年3月18日に英国でレビュー済み
Amazonで購入
I bought this to add to my collection of Glazunov CDs on the Naxos label. I was not disappointed. The Seasons is beautifully played as is the violin concerto even if it is a short work. Thoroughly recommend.
続きを読む
役に立った
フィードバックを送信中...
フィードバックをお寄せいただきありがとうございます。
申し訳ありませんが、お客様の投票の記録に失敗しました。もう一度試してください。
違反を報告
レビュー を日本語に翻訳する

DAVID BRYSON
5つ星のうち5.0 THE SEASONS AND A PHANTOM WALTZ
2014年11月11日に英国でレビュー済み
Amazonで購入
For some reason the music of the Seasons always seems to me to go best with the season of Advent, and I am now pleased to add Glazunov's ballet to variations on the theme of the Seasons by Vivaldi, Tchaikovsky (12 piano pieces) and of course Papa Haydn himself for the full-scale treatment. I like this disc from start to finish. The violin concerto gets probably the best performance, but the ballet has everything I am looking for by way of style and commitment, and I have no hesitation about awarding all five stars. I quite accept that I am setting the bar lower than I would if it were the Tchaikovsky or Stravinsky ballets, but I feel no compulsion to fret over niceties as I would where those are concerned.

Regarding the contents of the disc, believe what it says on the front of the leaflet and not what it says when you turn over the page. Above the English liner note you will see a reference to a Concert Waltz op 47, and it is mentioned above the German text too, although the French effort just says laconically `Works for Orchestra'. As you read on you find that the (anonymous) English text never mentions this ghostly waltz, the German gives its year of composition but no more, but the French is a little more forthcoming, informing us that `It was composed in 1893, the year of Tchaikovsky's death, and is inspired by his waltzes and also by those of Johann Strauss. Elegant and meticulously orchestrated, it is however less robust than theirs are.' So there you are - now you will know it when you next hear it; but you won't get to hear it on this cd.

I'm not surprised to be told that something by Glazunov lacks a bit of robustness. That lack seems to be a characteristic of his music more widely. In fact one thing that influenced me to give this set all five stars is that I found this playing, by the Czecho-Slovak Radio Symphony Orchestra under Ondrej Lenard, more full-blooded than I had just been finding the playing of Moscow's own orchestra under a Russian conductor in Glazunov's 2nd and 7th symphonies. I would not dare question the authenticity of that, but I was still relieved to find that there was another way of doing it. To help matters, this ballet famously contains what must be Glazunov's most famous tune, the Bacchanale in the Autumn section. Surely nobody soft-pedals that, and the account here is fine and energetic.

The performance of the short (20 minutes) violin concerto strikes me as being really excellent. The soloist is Ilya Kaler, supported by the Polish National Radio SO under Camilla Kolchinsky. I love in particular Kaler's full-toned and soulful playing right at the start, and the 1994 recording does them all justice (as does the 1987 sound in the Seasons). I happen to have an alternative version of the concerto, on another Naxos disc. However it is from 1934, featuring Heifetz, the LPO and Barbirolli. For its time the recording is not bad at all, and you should not be surprised to hear that the studio was none other than Abbey Road, famed for both Beecham in the 30's and the Beatles in the 60's. However even with the additional technical wizardry of Mark Obert-Thorn I can't find this a serious rival to what we have here, and I don't detect any radical differences between the two sets of artists in the view they take of the piece.

Naxos yet again. I don't have a policy of buying or recommending Naxos, it's just that they keep coming up with the goods.

Pork Chop
5つ星のうち5.0 One of the best Russian collections of all time on single CD
2005年11月23日にアメリカ合衆国でレビュー済み
Amazonで購入
Much like a camel is thirsty for water, the classical

will find in this CD many, many great things.

The digital audio recording, the mastering, mixing ....the playmanship,

the talent involved in the orchestra makes this CD rank among

the best of all time, in my collection.

If you enjoy Igor Stravinsky's compositions - at least the

best known ones, if not the majority - you will surely

learn to appreciate the influence Glazunov had on Stravinsky's

organization of each number.

in sugar, Glazunov at times is heavy on the violins and sentimentality,

but that just adds to his signature sound - with great success.

Pietro Zanette
5つ星のうち3.0 not so enthusiast
2011年3月15日にアメリカ合衆国でレビュー済み
Amazonで購入
Good recording,and fairly good music but not as I was expecting. The violin concert more convincing than the rest. I got this cd after buying the ballet Raymonda and that was good enough but not super convincing. This was another attempt at Glazunov before deciding to go for his Symphonies and Orchestral Music under Naxos label, we talk of about 20 cds. Well the decision is on halt because the Seasons, to me, is a half baked result. Some good moments are interspersed with outright boring ones and I am not able to catch the thread as I am in other composers even in their, let's say, bland moments. At any rate first class execution by Lenard and good sound. Then, considering the price, an attempt should be made after all.
続きを読む
2人のお客様がこれが役に立ったと考えています
役に立った
フィードバックを送信中...
フィードバックをお寄せいただきありがとうございます。
申し訳ありませんが、お客様の投票の記録に失敗しました。もう一度試してください。
違反を報告
レビュー を日本語に翻訳する