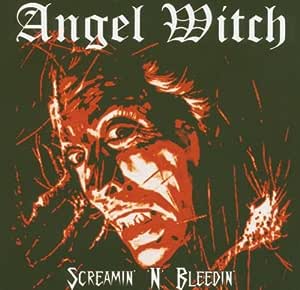 Matthew Schwarz
5つ星のうち4.0 Not bad, if you can find it affordably
2014年12月15日 - (Amazon.com)
形式: CD
Angel Witch's debut and their new "As Above, So Below" are top-notch British metal releases that I'd highly recommend, and luckily they're readily available these days. "Screamin' 'N' Bleedin'" is one of two hard-to find releases from the mid-80s (the only other studio albums the band released) with a lead singer (guitarist Kevin Heybourne handled the vocals for most of the band's releases). The singer's not bad, but it does take a bit away from the band's identity and he's not really any better than Heybourne, so I don't think it was a good move (not a terrible one, though). The music is maybe a little more mainstream than their debut, but nowhere near as much as Def Leppard and Diamond Head changed by the mid-80s. The CD version I got sounds pretty decent, but I'm a little disappointed they replaced the original artwork with something a lot less interesting.
Overall, not "essential" but worth picking up if you have the two great Angel Witch albums and you want more. (Note the "unreleased demo" compilation "Resurrection" sees the band heading into a heavier, kind of thrash direction.

A. Coulson
5つ星のうち3.0 Overlooked Follow-Up
2005年9月22日 - (Amazon.com)
形式: CD
Even those unfamiliar with the NWOBHM will likely recognize Angel Witch's eponymous debut album as one of the seminal releases in Metal history. What many don't realize is that the band, after some trials & tribulations, put out two more solid albums. Sadly, the release delays cost the band some of their following, and those who were still paying attention panned both albums for failing to recapture the early magic. True, neither of these will stand against the s/t album, but they are both decent releases in their own rights.

SnB is the band's second album and features several strong tracks, some of which had been in the band's live set since the early days. Many, such as 'waltz the night', emphasize the doomier side of the band's nature. Granted, some others simply lack enough punch to make them memorable, and the so-so production really didn't help in that respect.

If you want s/t pt II, don't look here, but if you want a good mid-80s brittish metal album, this (and their third LP, 'frontal assault') is worth a listen

Kackle the Kremling
5つ星のうち5.0 Ever Wonder What Evil Sounds Like?
2011年7月23日 - (Amazon.com)
形式: CD
The sound of evil, simply put, is Angel Witch, pure and undiluted. This is the British metal band's second album from 1985, and it's every bit as worth checking out as their mind-blowing debut from 1980. Far too few metalheads know about Angel Witch's first album, but even fewer know about this one.

I present to you Screamin' and Bleedin', re-introducing Kevin Heybourne, the guitarist and original creative force and vocalist of Angel Witch, and Dave Hogg, the original drummer of the band. There are also a couple of new additions here: bassist Pete Gordelier and vocalist Dave Tattum, both of whom fit in most excellently with Angel Witch's sound, enhancing the dark atmosphere that this band thrives in. While Kevin handled both the guitar playing AND the singing in the debut (and did a magnificent job), there couldn't be a better alternative vocalist than Tattum. He conveys the despair and agony Angel Witch fans love, and delivers almost as good as Kevin did on the debut. However, Kevin still sings a few verses here and there, delivering all the spine-chilling sensations we've come to expect from him in the title track, as well as in a few other places.

There is very little filler here, and satisfying variety. From the crushing march of "Waltz the Night," to the sweeping, creepy rush of "Whose to Blame," to the ghostly lament of "Afraid of the Dark," Screamin' and Bleedin' boldly continues the atmospheric, haunting, goose-bump-inducing perfection that the first album started. The vocal and guitar melodies are infectiously eerie and sublime, as usual.

I reccomend listening to this album on a dark, foggy night under a full moon. Don't miss out on this one, metalheads.

Mike Reed
5つ星のうち3.0 Angel Witch - 'Screamin' N Bleedin' (Metal Nation) 3 1/2 stars
2005年12月24日 - (Amazon.com)
形式: CD
Originally released in 1985, not quite as good as their 1980 self-titled debut. But, still a worthy follow-up. Recently found out this record had never even been put out on CD until this year; I've wondered as to WHY I could never find it listed, anywhere. Ten tracks with three live bonus cuts added makes this a semi-desirable title, perhaps even to new fans. A couple of tunes I found myself playing repeatedly were the title track "Screamin' N Bleedin'", "Evil Games" and "Fatal Kiss". Might have an actual bootleg cassette of Kevin Heybourne and crew during their UK tour to support this album. Decent 'New Wave Of British Heavy Metal' effort brought back to life.
続きを読む
1人のお客様がこれが役に立ったと考えています
レビュー を日本語に翻訳する