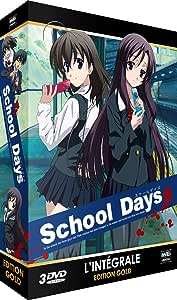 Thomas
5つ星のうち4.0 Great packaging!
2017年3月29日に英国でレビュー済み
Amazonで購入
Note: This review is coming from a person who doesn't speak French. There are no English subtitles on the disc to be found, so if you're looking for that, you've come to the wrong place.
As an American citizen, I was unsatisfied with the release of School Days put out by Discotek; content wise it's good, but the packaging is as simple as it gets, and I thought an infamous title like School Days deserved to look good on my shelf, so I picked this up. This is the "Gold Edition" of the show, and it includes collector's packaging, all 12 episodes plus the Magical Heart Kokoro-chan OVA, and some extra goodies. The kicker is that it's all in French, but since I bought the set mainly for the box, I can live with it. The DVDs are in a digipack style, so it's set up like a giant, foldable cardboard slab; you take it out of the outer box, unfold it, and take out the disc you want. The outer box is nice, with pretty artwork and a shiny gold trim. The image layout is nice, plenty of pictures to go around. The inner digipack is also adorned with artwork, including larger portraits of the characters on the outside, chibi versions on the inside, and it includes a slip that tells you which episodes are on which discs. The packaging is well designed, featuring a continuous blue ribbon (with the School Days logo numerous times) that wraps itself around the packaging, both front and back, without coming to a stop.
Disc content wise I'm also pleased. The menu images seemed a bit pixelated, although that could be due to my rather cheap region free player. The animation seems smooth enough, although there are a lot of noticeable "jaggies"around the edges, and a bit of ghosting (but again, that may just be my cheap player). The show has the original Japanese audio, and surprisingly a French dub. Since, again, I don't speak French, I can't really comment on the voice quality, but it does seem like the spoken dialogue is natural enough. None of the songs have been performed in French, it's all in the original Japanese.
In terms of bonus content, we get all of the textless OP and ED songs, the Kokoro-chan OVA, and even the censored TV-broadcast version of ep 12 they had to air due to a violent incident that happened that was similar to the show's ending (It's not the Nice Boat program; as much as I wish it was). The censored episode has Japanese dialogue only.
If you're looking for a pretty box to display this show in, it's cheap enough at the moment. Or, if you're looking for an actual French release of the show, you can't go wrong with this.
I'm subtracting a star due to the mediocre video quality. If I get the chance to watch this on a better player and the quality is good, I'll update the review.

-OJ-
5つ星のうち4.0 Good looking DVD-box
2017年4月23日に英国でレビュー済み
Amazonで購入
Since I already have the Blu-Ray edition I only bought this for the Collector's box, which looks pretty damn good!
It was dirt cheap, I might add - only cost 3 pounds brand new. It's highly recommended for the fans of the show who understand the original Japanese dub, or the French translation.
続きを読む