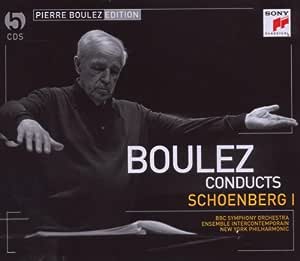 Autonomeus
5つ星のうち4.0 Superb Schoenberg reissue with minimal liner notes
2010年5月16日 - (Amazon.com)
形式: CDAmazonで購入
Arnold Schoenberg (1874-1951) was arguably THE pivotal composer who launched the 20th century avant-garde in classical music. Along with his students Alban Berg, Anton Webern, and Hanns Eisler -- the Second Vienna School -- Schoenberg exploded the late Romantic soundworld and opened up new worlds of possibilities, first with atonal expressionism, and later with the innovative serialist system of composition. Schoenberg was a good friend of the painter Kandinsky, and while Kandinsky pioneered the break from representation to total abstraction in painting, Schoenberg pioneered the break with tonality in music. While the pretty chromaticism of the earlier radical Debussy continues to influence French composers and tendencies such as minimalism and spectralism, Schoenberg's ongoing influence is most obvious in German and Austrian Neue Musik, but in a larger and less direct way his innovations shape contemporary practice through the training of composers and through the existence of an open universe of sound that cannot be closed off. It is generally agreed that Schoenberg's writing falls into three periods, an early Romantic period (1894-1907), the free atonal expressionist period (1908-1922), and the 12 tone period (1923-1951).

This 5-disc set of Pierre Boulez leading the BBC Symphony Orchestra and the Ensemble Intercontemporain (EI), recorded in the 1970s and early 1980s, is a great Schoenberg collection which includes many of his best and most influential compositions. It does not include the string quartets, which can be found, among other places, in the superb Schoenberg: Chamber Music for Strings box with performances by the Schoenberg Quartet, or the violin and piano concertos, which can be found together on a Boulez 2-disc Apex set. The late, unfinished serialist opera "Moses und Aron" is included in the 6-disc companion to this set, Schoenberg: Pierre Boulez Edition 2, along with "Gurre-Leider" and "Choral Works."

Here is a survey of what you *will* find within:

Disc One
The SUITE, OP. 29 is a serialist chamber work for septet (2 clarinets, bass clarinet, violin, viola, cello and piano) of approximately 30 minutes, written between 1924 and 1926. This is a 1982 recording of members of the Ensemble Intercontemporain. VERKLARTE NACHTE, OP. 4 for string sextet was written in 1902, also about 30 minutes in length, and this performance by members of the EI was recorded in 1983. This is an excellent combination of early and late chamber works -- I find both to be thoroughly convincing and compelling. Also included is the short "3 Pieces For Chamber Orchestra," a fragment found after Schoenberg's death, a 1910 piece for an ensemble of 12.

Disc Two
DIE JAKOBSLEITER, a 47-minute fragment of an oratorio that was interrupted by WWI and never completed, is the feature on this disc, performed by the BBC Singers and BBC Symphony Orchestra, recorded in 1980. Schoenberg's libretto (included in the 1993 Sony disc but not in this reissue) features the Archangel Gabriel summoning the malcontents, doubters, rejoicers and the indifferent to transformation. Its syncretism includes reincarnation, karma, theosophy and Swedenborgian mysticism, an ultimate oneness. Musically it is an example of the atonal period, but includes developments in the direction of the 12 tone method of the 1920s. It's not one of my favorite of Schoenberg's works, but the vocals and orchestral music are both compelling. No libretto is included, only a synopsis. The CHAMBER SYMPHONY NO. 1, OP 9 of 1906, a 20-minute piece here performed by a 15-member ensemble of EI musicians recorded in 1980, is a strong early work, suggestive of Schoenberg's move away from Romanticism in its clarity and transparency. Also included is an 8-minute piece from 1929/30 called "Accompaniment to a Cinematographic Scene," performed by the BBCSO and recorded in 1976.

Disc Three
This disc features one of Schoenberg's masterpieces, the vastly influential 5 PIECES FOR ORCHESTRA, a 15-minute work from 1909, here performed by the BBCSO and recorded in 1976. With brilliant imagination, Schoenberg demonstrates the beauty of music beyond tonality. The SERENADE, OP. 24 of 1920-23 is quite quirky, with a serialist septet featuring a mandolin, and a baritone voice featured in the central fourth movement of seven. Over 32 minutes long, this performance by members of the EI was recorded in 1979. The excellent ODE TO NAPOLEON BUONAPARTE, OP. 41 for string quartet, piano and reciter, was written in 1942 and uses Byron's poem about Napoleon to address Hitler. Again, the original CD release includes the texts from Petrarch and Byron, but the reissue does not.

Disc Four
This is a disc that I first heard many years ago but did not appreciate until recently. DIE GLUCKLICHE HAND, OP. 18, is an atonal "drama mit musik" of 1910-13, about 20 minutes in length, here performed by the BBC Singers and BBCSO, recorded in 1981. When I first heard it I found the twisted Symbolist lyrics and story to be offputting and I couldn't appreciate the music. Returning to it as pure music and ignoring the content I find it to be very rewarding. VARIATIONS FOR ORCHESTRA, OP. 31, is another 20-minute work that applies the 12 tone method to orchestral writing. This recording is the BBCSO from 1976. While not as immediately stunning as the earlier 5 PIECES, this complex work bears repeated listening. I prefer Boulez's 1991 recording with the CSO, which is darker and slightly more spacious -- this performance is brighter and sharper -- but this is a fine version. The third piece on this disc is the Version for String Orchestra of VERKLARTE NACHTE, OP. 4, here performed by the NY Philharmonic, recorded in 1973. About 27 minutes long, I find this to be very ripe Romanticism, much less impressive than the original sextet version, but played with gusto.

Disc Five
The last disc includes two works for soprano from the atonal period, PIERROT LUNAIRE, OP. 21 of 1912 (34 minutes), and ERWARTUNG (29 minutes), written in 1909 but not performed until 1924. These recordings are from 1977. ERWARTUNG, another harrowing Symbolist tale, is here sung by Janis Martin with the BBCSO. PIERROT, a unique and charming Schoenberg masterpiece, features Yvonne Minton as reciter, with what came to be called the Pierrot Ensemble of violin, cello, piano, flute and clarinet, here with an all-star line-up including Daniel Barenboim, Pinchas Zukerman, Lynn Harrell and Anthony Pay. It seems to be widely agreed that Minton, with a beautiful soprano voice, does too much singing and does not do justice to the "sprechgesang" (speech-song) that Schoenberg calls for. I prefer the PIERROT vocal on a disc with Sinopoli leading an ensemble from the Staatskapelle Dresden and Luisa Castellani, also combined with ERWARTUNG, but the instrumental performance on this Boulez disc is better. PIERROT is light and ironic, settings of 21 poems by Giraud, a mood completely different from that of ERWARTUNG. The Sinopoli/Castellani disc includes the entire text, which is not included in this Sony reissue. Also included on this disc is a 12-minute song with soprano Jessye Norman, the beautiful "Gurre-Lieder: Lied der Waldtube" (Song of the Wood Dove).

All in all, an excellent set, well worth obtaining. My only caveat is that the original discs, as indicated in the links above, are still available with better cover art (including a younger Boulez from the time of the recordings instead of the older Boulez on the new box) and more extensive liner notes including lyrics, one reason for the 4 star rating -- the other is the PIERROT/ERWARTUNG disc, which is not the first choice. But whether as separate discs or in this set, these Schoenberg/Boulez recordings are essential. I should also point out that this, unfortunately, is not a true box, but rather a 4-disc jewel box with a pull-out 5th disc. These cumbersome contraptions can be annoying and often break, but this particular design seems pretty sturdy. I would think this is probably what Sony used for all its other PIERRE BOULEZ EDITION reissues as well.
続きを読む
18人のお客様がこれが役に立ったと考えています
レビュー を日本語に翻訳する