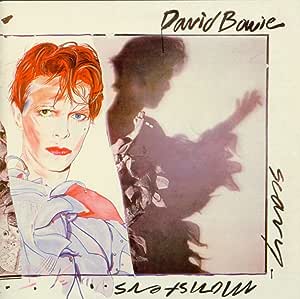 Some would argue that this is the last great Bowie album, and certainly his only great album of the '80s. While it lacked the bite of its punk brethren at the time, it appealed to some fans of that genre and to middle-of-the-road rockers as well. Muscular playing met with no-frills production, and the product as a whole was infused with a gloriously arty style. "It's No Game (Part I)" opens the album, and is sung in Japanese, and "It's No Game (Part II)" closes, in English. New York punker Tom Verlaine even contributed a track ("Kingdom Come"), and "Scream Like a Baby" tells a dark and violent story with a howl. The drug-oriented "Ashes to Ashes" confesses that Major Tom was a junky while sounding all sleek and alluring, and the dance floor hit "Fashion" took aim at its very subject. The crowning jewel is the title track, with Robert Fripp's guitar ripping the place up at a relentless pace. It's been a long time since Bowie sounded this inspired. --Lorry Fleming

Wakeman
5つ星のうち4.0 One of the last great Bowie albums
2018年7月12日に英国でレビュー済み
Amazonで購入
This review relates to the 1999 CD remixed version.

Another album from my past; there seem to be a lot! I originally owned this on cassette, rather than vinyl. That copy was played in the car frequently during a holiday in Europe in, I think, 1981. It contains several of my favourite Bowie tracks (Fashion, Ashes to Ashes and the title song) and, on revisiting, seems more coherent an album than I recall. I had also forgotten how aggressive some of Robert Fripp's guitar work was. In places, it rivals some of his best for King Crimson.

This was one of the last I bought, as after this album. my interest in Bowie's work decreased, as somehow I felt that his peak had passed. The exception -  Let's Dance (1999 Remastered Version) .
続きを読む
11人のお客様がこれが役に立ったと考えています
違反を報告
レビュー を日本語に翻訳する

J Jones
5つ星のうち5.0 Love this album
2020年3月31日に英国でレビュー済み
Amazonで購入
Back in the day I had the early Bowie albums up to Scary Monsters, decided to get the lot on cd for my collection. Arrived on time, in good condition & this is an absolute classic, is brilliant. If you've never heard it give it a go!
続きを読む
1人のお客様がこれが役に立ったと考えています
違反を報告
レビュー を日本語に翻訳する

Craig Tattersall
5つ星のうち5.0 Iconic album
2020年3月21日に英国でレビュー済み
Amazonで購入
A Bowie fan all my life this album is one of my favourites from the legend. My favourite track is the B-side Teenage Wildlife. Also Robert Fripp's guitar work on the album is impressive.
続きを読む
2人のお客様がこれが役に立ったと考えています
違反を報告
レビュー を日本語に翻訳する