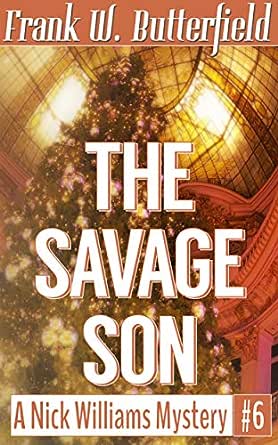 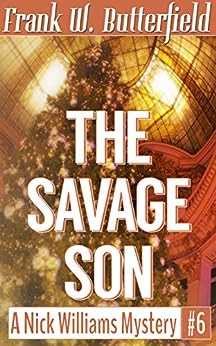 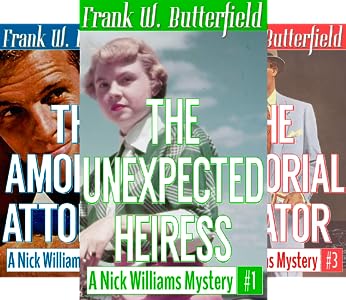 Ivan Kopek is missing and his parents desperately want Nick's help. Ike, as he's known to his friends, is quickly found once Nick, Carter, and their pals are on the case. Unfortunately, Ike's in jail for a murder he didn't commit. And it was only because he didn't get the chance to do it himself.

But, Carter wants a Christmas tree and Dr. Parnell Williams, Nick's evil bastard of a father, has summoned them both to the mansion on Sacramento Street for Christmas day at 12 noon. And they're not to be late.

In the end, Christmas brings Nick & Carter a number of unexpected and life-changing packages, both big and small.

In the Savage Son, Nick Williams takes on the search for a missing young man, Ike Kopek. As in all of the Nick William’s books, twists and turns begin immediately, as the information Ike’s parents give Nick turns out to not quite mesh with the reality Nick discovers.

Every one of these books takes a look at some aspect of gay life in America in the early 1950s, conjuring up a vivid period setting, replete with cars and men’s fashions. We see a world that is long gone, but lives on in Butterfield’s vivid descriptions and spare, no-nonsense prose. We are constantly reminded of the slings and arrows that gay folk suffered in this period, even if they managed to survive and thrive. Nick himself is subjected to treatment that is shocking by today’s standards, in spite of his wealth. I have likened Williams to a gay Batman, but Perry Mason is obviously going to come to mind for any mystery reader (or person my age who watched TV in the 1950s as a kid).

The larger surprise in this book is that we realize that, over the course of these six-plus books, we’ve developed something of a detailed profile on Nick’s own psyche. Rejected by his rich family and haunted by the disappearance of his mother when he was a boy, Nick uses the vast fortune inherited from his notorious great uncle Paul to do good for his gay brothers and sisters. But Nick is never bitter; he loves life, he loves his husband Carter (and dares to call him that), and wants to make the world easier for people like him who have been beaten up (sometimes literally) by a bigoted world. Nick suppresses the pretensions of his privileged upbringing, but never loses the confidence (some might say arrogance) that enables him to think of ways to defeat the Powers that Be in favor of the downtrodden and oppressed.

Aside from the central missing-man-and-murder plot arc of this book, there is a huge amount going on all around, involving Nick’s friends and colleagues. All of this builds to a surprisingly emotional Christmas, which includes wonderful vignettes of shopping in San Francisco during the postwar book of retail. We see in this book how Nick has changed, and how the world is beginning to move toward tolerance one person at a time.

This was my favorite book of the series. I hope it’s not the end of the series, because I love Nick and Carter and Marnie and all the rest.
続きを読む
3人のお客様がこれが役に立ったと考えています
レビュー を日本語に翻訳する

silvia
5つ星のうち5.0 My fave book in the series
2019年7月16日 - (Amazon.com)
Amazonで購入
Each book just gets better and better. Lol. It seems “better and better” has become my mantra for this series.

Although there was still a mystery to be solved, the setting for this book took place during the Christmas season which made me get in the holiday spirit even though it’s July! Nick and Carter’s love gets stronger and more amazing with each book. Nick finds out things about his past that kinda explains why he is the way he is which made my heart melt and brought tears to my eyes. Happy tears. In fact, love is in the air with not only them but with.....oops, almost spilled the beans. No can do! You must buy the book, in fact, buy the whole series. You will not regret it.
続きを読む
レビュー を日本語に翻訳する

Having now completed The Mangled Mobster, which was stellar, I know what to say. First, this book lays foundation for the next. Many of the characters you meet here have steady roles in Mobster. And given that The Mangled Mobster was SO good, read this and then move right into that.

Looking back, they feel very much like one story...and a good one!
続きを読む
2人のお客様がこれが役に立ったと考えています
レビュー を日本語に翻訳する