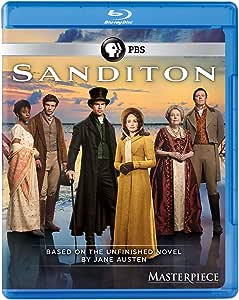 min
5つ星のうち5.0 SANDITON IS AN ABSOLUTELY WONDERFUL SHOW - HIGHLY RECOMMEND!!!
2020年1月19日 - (Amazon.com)
Sanditon is an Andrew Davies adaptation of Jane Austen’s final unfinished novel about a seaside town of the same name. The protagonist, Charlotte Heyward, befriends Mr Tom Parker and his family, who are attempting to transform Sanditon into the “finest seaside resort” along the southern coast of England. They invite Charlotte to stay with them in Sanditon, and there she meets a cast of interesting people and experiences many new adventures.

Sanditon was a fantastic show - I loved it. It is a modern take on period drama. I didn’t know much about the novel prior to watching this TV adaptation and I remember thinking at times, “this seems very modern for Austen”, but not in a bad way. It is a lot racier than other traditional Austen series/movies, so people who like traditional period dramas may not enjoy Sanditon if they are comparing it to “authentic” Austen. Of course it is different from other Austen adaptations, because in a lot of ways it is not! It takes the characters Austen created and has used creative licence to finish their stories in a very entertaining and fresh way (in my opinion!).

The characters are perfectly cast (fantastic acting by everyone in the cast!), the costumes are amazing, the cinematography and scenery are breath taking, and the soundtrack is perfect. If there are historical inaccuracies in any of the costumes/dialogue/soundtrack/setting, for me it didn’t take away from the charm of the show (some perceived inaccuracies flagged by viewers seem debatable, but I’ll leave it to qualified historians to judge that!)

The love story between Charlotte and Sidney Parker (Tom Parker’s younger brother) develops slowly and is beautiful acted by Rose Williams and Theo James; I was grinning like an idiot any time these two characters interacted! But Sanditon is more than just the main love story, introducing a whole host of interesting and complex characters. Each character has their flaws but by the end of the series we see enough of their stories to understand their actions, even if we don’t always agree with them. There is also a lot of character development of the main characters which is so lovely to watch unfold! One of few criticisms I have is that sometimes the characters’ back stories could have been more fully developed (e.g., I would have loved to learn more about Sidney’s time in Antigua and also more about Georgianas father and her life before coming to England, as well as Clara’s life before moving to Sanditon, etc.). But trying to cram all of that into 8 episodes is hard, and not delved into perhaps partly because the show was produced with the possibility of a second (or more) season.

The ending of the series leaves many stories unfinished and this may also frustrate
People. I take this show on its own merit, and loved it despite the fact it ends as a cliff hanger. But I would LOVE LOVE LOVE to see more and will keep all my fingers and toes crossed that it will return for a second season (or multiple seasons, that would be fine with me too!!) to tie up all those loose ends.

Unfortunately at this stage a second season of Sanditon isn’t confirmed. I really hope that this wonderful show gets picked up for a second season so we can learn the fate of these amazing characters!

Maria Rivera
5つ星のうち5.0 Sanditon needs an ending
2020年2月5日 - (Amazon.com)
Amazonで購入
I purchased the Blu-Ray version of Sanditon and thoroughly enjoyed it except I was disappointed to find the ending as a cliff hanger. Please, give us an ending to the story. I appeal to the producers of this production, please, please, please -- We need an ending to this story -- not a cliff hanger. It's not fair to us -- Jane Austen's fans.
続きを読む
84人のお客様がこれが役に立ったと考えています
レビュー を日本語に翻訳する

Aunt B
5つ星のうち5.0 Absolutely Fabulous!!!!!
2020年2月5日 - (Amazon.com)
Amazonで購入
There is no way that they can NOT make another season of this show!!!!! This is the best new show I’ve seen in years! I love period dramas and this one is very well done. Fabulous actors, great story....it is so obviously not finished. You can tell the show was left as a cliffhanger for the next season. PBS would be CRAZY to not continue this gem.
続きを読む
81人のお客様がこれが役に立ったと考えています
レビュー を日本語に翻訳する

st1000
5つ星のうち1.0 Feels like it barely avoids an R rating
2020年1月19日 - (Amazon.com)
What happens when you take a Jane Austen premise and use it to create a story aimed at fans of Game of Thrones? This series happens. Really, it seems like they made a list of the characters from Austen's fragment and said, "Now what horrible past or awful personality trait can we give this character?"
Trigger warnings (from the first 2 episodes; more may apply later in the series): Child abuse, incest, attempted rape, S & M, racial discrimination, substance abuse.
Seriously, don't watch this with your kids or teenage daughters. There is explicit sexual discussion in here, as well as some male nudity.
If you really want to watch it, I recommend fast-forwarding every time Sir Edward Denham or his dominatrix sister appear. You may think "Surely they wouldn't say or do anything appalling in the company of this other person." Oh, but they would. They would.
In the interest of balance: The costuming and sets are very fine, the countryside is beautiful, and the music is pleasant although not what I was expecting. I liked the hero and heroine quite a bit.
続きを読む
99人のお客様がこれが役に立ったと考えています
レビュー を日本語に翻訳する