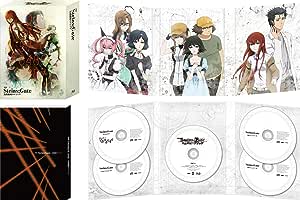 N.
5つ星のうち5.0 Excellent movie, a must for Steins;Gate fans
2014年12月13日にアメリカ合衆国でレビュー済み
Amazonで購入
Since there doesn't seems to be any proper clear review of the product, I'll try to cover everything here so that any question can be answered.
(Do consider that I am not a native english speaker, and that I may write in a weird manner and/or be unclear at some points.)

First of all, this japanese blu-ray will play on North American blu-ray players, in case you were wondering, and there are indeed english subtitles. The subtitles themselves are quite good, but do expect them to translate things in unexpected ways sometimes, if you are familiar with the anime. (The only instance this striked me is when they translated «tsundere» to sweet and sour instead of keeping the actual word as the funimation subs do). But overall, everything is good here. The movie itself last around an hour and a half.

Now, this movie is a follow-up to Steins;Gate anime (and the original visual novel that follows the same story pretty much). I would say it is better if you have watched the series before watching this movie, but not essential. Most of the necessary things that are needed to be known are explained for you to understand the storyline. But, keep in mind that without any prior knowledge, understanding some points will prove to be difficult. Overall, I highly recommend you have watched the anime OR played the visual novel before watching the movie.

As for the movie itself, it's nothing short of great, in my opinion. If you are a fan of Steins;Gate, you will certainly not be disappointed. This time around, Makise Kurisu is the main character (instead of Okabe Rintaro), and it's nice to really see a story from her point of view. I won't go in the details of the plot, but overall it's pretty good and interesting. I do feel, however, that the «science» behind this movie is weaker than in the anime (and visual novel), but maybe that's just me (however, do consider this movie has only an hour and a half to tell a story). Also, this is a movie way more oriented towards «emotions» rather than action, which isn't a bad thing at all as far as I'm concerned, just don't expect the movie to be an action flick or one of the more «action-oriented» episodes of the anime. Nevertheless, this movie is about emotions, and it does incredibly well in making the viewer feel for the characters (maybe less if you haven't seen the anime). Some people may argue that some parts of the movie are «slower», but it didn't strike me as being problematic, even if the actual main plot kicked in after half an hour (which was an entertaining half an hour as far as I'm concerned). I will not add anything on the subject, fearing I might spoil something, just keep in mind this movie has the same humor as the original anime and the same emotional weight at some points too.

In conclusion, this movie is incredible, and any Steins;Gate fan should watch it, and I'm pretty they are bound to love it as much as I did. The price is a bit high however, so maybe it would be preferable to wait until funimation releases it on their end (since their licensed it this year I think). The problem is, we do not know when such a release will see the light of day.

Colton
5つ星のうち5.0 A wonderful continuation of the ending of the anime.
2015年9月15日にアメリカ合衆国でレビュー済み
Amazonで購入
While the Steins;Gate anime ended on a very lovely note, going even farther than the first Visual Novel did, I'm sure many people still want to see canon adventures of this wonderful cast. Fortunately for SciAdv fans around the world this movie does the cast and story justice, but the "99% science 1% fantasy" element of the original series definitely gets stretched pretty far for the plot in this story. In the movie's favor the original did have a microwave time machine so calling the pseudo-science out on it might be too far.

Overall: The movie is a great addition to the Steins;Gate story exploring Kurisu's character in more detail, and at the same time it shows how Okabe has come to terms with all that has happened to him.

Is this movie great for people who have never seen Steins;Gate? While the overall story is really well done a lot of the tragedy and motivations behind the characters will be lost to those who haven't seen or read the source. On the other hand the movie does a good job of attempting to explain the past events for newcomers, so those just watching something Steins;Gate related shouldn't be completely lost.

Animation: The animation is better than the anime which already had fantastic animation. Not much to say here.

Sound: All the cast returns from the VN as far as I could tell which means incredible performances all around. No English audio. The music is also great which is expected since nitro+ & 5pb. all do music in-house.

Translation: A pretty good translation with a headscratcher here and there. Ex. as mentioned above tsundere became "sweet and sour."

PS. The music CD was also cool. I can't understand the drama CDs, but they were still fun to listen to with a script I found online.

Michael
5つ星のうち5.0 I love my Steins;Gate
2016年8月11日にアメリカ合衆国でレビュー済み
Amazonで購入
Welp, as a total Steins;Gate fanboy I shelled out the moolah for this. I can honestly say I'm not disappointed. It comes with the movie, some drama CDs, and a booklet that contains some stories and art from Steins;Gate (if only I could read Japanese). The movie is very good for an anime movie in my opinion. It covers more of the relationship between Okabe and Kurisu and I think adds to the series very well. I give it two enthusiastic thumbs up.
続きを読む
役に立った
フィードバックを送信中...
フィードバックをお寄せいただきありがとうございます。
申し訳ありませんが、お客様の投票の記録に失敗しました。もう一度試してください。
違反を報告
レビュー を日本語に翻訳する

Darkness
5つ星のうち5.0 This should join some of the best anime ever.
2015年10月14日にアメリカ合衆国でレビュー済み
Amazonで購入
Ok, so for those of you who are confused with what this is : this is an epilogue to the Steins; Gate series.  Steins Gate: Complete Series Classic [Blu-ray ]
Its a great epilogue, concluding an even better series. In short, the whole series is about time travelling sprinkled with some romance and tension that usually accompanies time travelling movies as things go wrong.
I am not going to write much more here - but I'll put a full review in the main series.

Scorv
5つ星のうち5.0 YES!!!
2015年11月12日にアメリカ合衆国でレビュー済み
Amazonで購入
A fantastic wrap up to the Steins;Gate series! I would definitely suggest watching the tv series first. This story is told from the main females point of view which was very entertaining for me. Worth every cent
続きを読む
役に立った
フィードバックを送信中...
フィードバックをお寄せいただきありがとうございます。
申し訳ありませんが、お客様の投票の記録に失敗しました。もう一度試してください。
違反を報告
レビュー を日本語に翻訳する

DAVID REA
5つ星のうち4.0 Great movie
2014年1月18日にアメリカ合衆国でレビュー済み
Amazonで購入
You have to be familiar with the rest of the series or it will not make sense. It plays in any PC or laptop under the VLC program. should play under your media player if you have never played a US spec movie.
続きを読む
役に立った
フィードバックを送信中...
フィードバックをお寄せいただきありがとうございます。
申し訳ありませんが、お客様の投票の記録に失敗しました。もう一度試してください。
違反を報告
レビュー を日本語に翻訳する