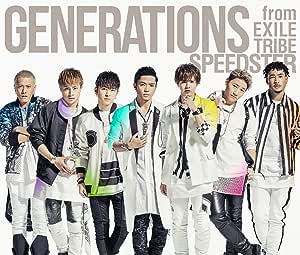 sanoe.net
5つ星のうち5.0 Addicting
2017年10月29日にアメリカ合衆国でレビュー済み
Amazonで購入
I don't know how I came across Generations from Exile Tribe, but once I heard one song from them ("Ageha"), I wanted to hear more. I actually opened an account with iTunes and Spotify so I could hear more of their music and so far, I haven't been disappointed. In fact, I'm rather addicted to the music.

I don't really know much about them except that they are made up of 2 vocalists and 5 dancers which is an interesting set up to me, but apparently is something of a standard with the company they are affiliated with. Outside of that, I don't know much more about them except that their songs are top grade pop-dance-r&b music. The really good stuff that makes you want to smile and move. "Evergreen", which is on this CD, is about as good a pop song as I've ever heard. I can imagine that 10 years from now, it'll sound as good then as it did on the first listen. Other songs on this CD are solid. I really like "Loadstar" and "Gimme!" but I have the softest of soft spots for "I Believe In Miracles" which sounds straight out of 1977 and I mean that in the best way possible.

It doesn't look like their CDs and/or DVDs are available from Amazon US except via third party sellers and thank goodness, the third party seller that I buy from is super reliable and I'm quite happy with them. Generations from Exile are available on Spotify and iTunes so if anyone wants to check them out, that's a good place to start. While I like listening via iTunes and Spotify, I still like having the hard copy CD in my hands and this is my first CD that I've bought for this group. It was actually released a few years ago so I've got some catching up to do and I look forward to collecting them all.