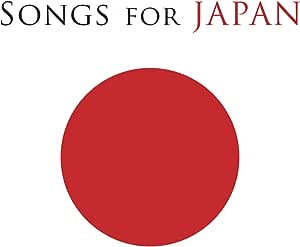 2011 benefit CD released to aid those affected by the devastating earthquake and tsunami in Japan. In what stands as a major global music relief effort, over 30 of the biggest names in contemporary music have joined together for the worldwide release of Songs For Japan, an unprecedented compilation of 38 chart-topping hits and classic tracks. Proceeds from the album's sale will benefit the disaster relief efforts of the Japanese Red Cross Society. Features tracks from John Lennon, Lady Gaga, U2, Katy Perry, Red Hot Chili Peppers, Bob Dylan, Beyonce, Rihanna and many others.

coffeedrinker
5つ星のうち4.0 Interesting compilation
2012年12月1日に英国でレビュー済み
Amazonで購入
This is a varied and interesting compilation. It raised over $5 million to help in Japan in the immediate aftermath of the tsunami and deserves to continue selling copies as the need continues. It has been criticised for being largely a selection of already released material but it gave us all a way to show solidarity and empathy at a time when the Japanese gave no lead on what we could do to help. Some of the songs are inappropriate - Beyonce sings of replacing a man in a minute so he needn't think he is irreplaceable, not the most tactful when people faced such grief - but the point was to generate cash to let the people help themselves recover and it did that well. It also gave us some good music, as good as any other compilation. Win, win?
続きを読む
違反を報告
レビュー を日本語に翻訳する

mellowpellow
5つ星のうち5.0 Great value for a good cause.
2011年4月11日に英国でレビュー済み
Amazonで購入
I bought this mainly to help a little the people of Japan as my son lives there and is safe `thank god`.It has a good variety of music and songs for all tastes,I have been listening to it instead of the radio just for a change.I would recommend this as £5 goes to the Japanese disaster fund and you get a nice bit of music into the bargain.
続きを読む
23人のお客様がこれが役に立ったと考えています
違反を報告
レビュー を日本語に翻訳する

Tafal Pottery Studio
5つ星のうち3.0 Help for Japanese Tsunami victims
2015年12月3日に英国でレビュー済み
Amazonで購入
Bought this to support the victims of the Tsunami disaster in Japan but also very pleased that one of the songs was by Queen when they toured Japan and part of it is Freddie singing in Japanese! Loved it!
続きを読む
違反を報告
レビュー を日本語に翻訳する

Darryl Rushin
5つ星のうち5.0 good selection of songs
2014年1月10日に英国でレビュー済み
Amazonで購入
i have been meaning to buy this since its release but for 1 reason or another i never got round to it but when i found it for such a low price i couldnt resist
続きを読む
違反を報告
レビュー を日本語に翻訳する