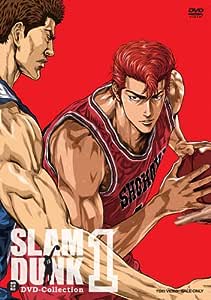 Sebastian
5つ星のうち2.0 A Slam Dunk this is NOT!
2015年5月29日にカナダでレビュー済み
Amazonで購入
Originally this seemed like a great thing that had FINALLY happened. The original listing showed a Japanese audio track with English Subtitles,but I was deceived, I had pre-ordered these DVDs under these pretenses,and a day or two before(I decided to check on the product again) I had realized that they had switched the listing info! It had only English for the Audio track, with no sign of the Japanese track anywhere! This greatly disappointed me as I had originally watched Slam Dunk in Japanese(original language of course) with English Subtitles, and the original was what helped me fall in love with the series. After I received the DVDs I decided I would keep them(solely because its Slam Dunk) and give them a watch, So I started it up and was greatly disappointed, so much so that I had to cut watching the first episode short. Now I am one who does watch a lot of anime English Dubbed, but this felt like an insult, Off pronunciation of names, hardly any tone in voice, and the synchronization was off far too much. This in no way feels like a proper release, and I will not purchase further copies,unless of course they are re-released with the Japanese Track and English Subtitles,in which case I would be fine with it. Two stars for the cheap price, and the fact that its Slam Dunk, otherwise do not buy it!
続きを読む
役に立った
フィードバックを送信中...
フィードバックをお寄せいただきありがとうございます。
申し訳ありませんが、お客様の投票の記録に失敗しました。もう一度試してください。
違反を報告
レビュー を日本語に翻訳する

rick
5つ星のうち5.0 This is a great anime despite lack of a japanese dub
2015年5月20日にカナダでレビュー済み
Amazonで購入
I previously wrote a premature review for slam dunk and i am now rewriting this review after finishing season one in its entirety; initially i was quite disappointed at the fact that this anime was only in English dub i felt the voice acting was lame at first. However, it took me a few episodes for me to really get over the voice acting, now the dub is not the best but i thoroughly enjoyed this anime nonetheless. The dub isn't as bad as people make it out to be. All in all this anime is great i give the first season 5!
続きを読む
役に立った
フィードバックを送信中...
フィードバックをお寄せいただきありがとうございます。
申し訳ありませんが、お客様の投票の記録に失敗しました。もう一度試してください。
違反を報告
レビュー を日本語に翻訳する

John Ronald
5つ星のうち4.0 Strange dub-only re-release of this older series....
2016年1月29日にアメリカ合衆国でレビュー済み
Amazonで購入
This anime is a re-release that I first started watching on Crunchyroll. It is mildly entertaining, but very curiously it contains no original Japanese language track, only the English dub and no subtitles. This is rather shocking, considering the older anime fan this release is ostensibly aimed at; while I personally prefer dubbed anime, I think it is a mistake not to include the subtitled Japanese version for fans that prefer that. This disc contains Episode 1-14, and the series contains over 100 episodes. Although reasonably priced compared to a lot of contemporary releases, considering how many total episodes are left, I don't see myself buying this series volume by volume. The dub old and not the greatest (modern dubs are much better done), but the series does bring a smile to my face every so often. The pacing is achingly slow, a lot of time is wasted with the main character's absurd fantasies in his own head. You want to root for him, but he's kind of a moron and a thug and gets on everybody's nerves and is often his own worst enemy and has an outsized ego far in excess of his actual abilities. He has raw talent and potential, but at this stage is woefully lacking in experience and discipline. He has a long way to go and I'm not sure I have the patience or fortitude myself to watch his journey to the end. I'd recommend watching Kuroko's Basketball first before tackling this series.
続きを読む
3人のお客様がこれが役に立ったと考えています
役に立った
フィードバックを送信中...
フィードバックをお寄せいただきありがとうございます。
申し訳ありませんが、お客様の投票の記録に失敗しました。もう一度試してください。
違反を報告
レビュー を日本語に翻訳する

Kadjius
5つ星のうち5.0 As far as sport anime goes, this is a real Slam Dunk
2011年11月29日にアメリカ合衆国でレビュー済み
Amazonで購入
Slam Dunk tells the story of Hanamichi Sakuragi, a hot-blooded young man who was famous in Junior High for being rejected by 50 girls and for his dyed red hair. Things are looking grim as he enters Shohoku High School, since a girl rejects him of his very first day, preferring instead to hang out with a basketball player. Instantly, Sakuragi develops a hatred for basketball and anything or anyone that has something to do with it. That is until he meets Haruko Akagi, a sweet pretty girl who happens to be a huge basketball fan and from whom Sakuragi ends up falling madly in love with. Thus starts the adventures of Hanamichi Sakuragi, basketball genius, as he fights his way through the very best of their region's basketball teams, learning every nuance of the sport and maybe something about himself, and his relationship to others along the way. In my opinion, this is one of the very best sports anime ever, especially because one can immediately tell that the author Takehiko Inohue really loves the sport, and tells the story of the Shohoku Basketball Team in an interesting, and above all, hilarious way.
続きを読む
1人のお客様がこれが役に立ったと考えています
役に立った
フィードバックを送信中...
フィードバックをお寄せいただきありがとうございます。
申し訳ありませんが、お客様の投票の記録に失敗しました。もう一度試してください。
違反を報告
レビュー を日本語に翻訳する

DJ Andre
5つ星のうち1.0 Great Anime, BAD release on DVD
2012年5月15日にアメリカ合衆国でレビュー済み
Amazonで購入
So i'm not necessarily sure why these 4 volumes to Slam Dunk's anime have such great reviews on here, because if you've actually watched these dvd's then you can agree they are quite the trainwreck.

And the trainwreck of a release is quite potentially why the series probably didn't sell well in the states which is a shame because Slam Dunk is one of the best Sports series ever conceived (by the legendary manga artist Takehiko Inoue who is also known for Vagabond & Real).

I barely could even get past the first 2 episodes it was that unbearable.

First the menu's are extremely barebones more-so then any other anime i've seen, probably on par with the earliest DVD releases back in the late 90s, there's not even any music in the background & this first volume was released in 2005.

After you finish an episode it sends you right back to the main menu as opposed to letting you watch all the epsiodes in their entirety.

The quality of the visuals are also partially outdated, making it look like these episodes were recorded off a VHS somewhat.

Lastly both the dub AND sub were intolerable, the dub features some of THE worst acting that has ever graced my ears, there was not even one good performance & one of the actors also over-acted which didn't fit even remotely, the walla/background voices were THE worst of it all & I found it VERY peculiar that the english actors even said the Japanese honorifics aloud like -kun, -san, -chan, etc. This came out in 2005 when they were vastly superior dubs of the same time like FullMetal Alchemist, Ghost in the Shell Stand Alone Complex, Samurai 7, Gunslinger Girl, Samurai Champloo, Etc.

As for the subtitles what made them unreadable was that they translated the sound effects or grunts characters would make, similar to the subtitled release of the Ghost in the Shell 2 Movie from Dreamworks from 2004.

So if you're looking to collect the Slam Dunk series then I advise you pick up the manga volumes over these 4 anime dvd volumes, especially because Viz Media is still currently releasing the manga with 21 of the 31 books now available in a PROPER translation & Geneon never released the anime to dvd in its entirety, these 4 dvd volumes only contain 20 of the 100+ episodes of the anime. But hopefully some group like Nozomi or Discotek rescue the anime property & give it the release it deserves one of these days.

randy Anderson
5つ星のうち5.0 one of the best anime classic ever
2015年7月11日にアメリカ合衆国でレビュー済み
Amazonで購入
Just got it today in I'm very happy with it , English dub is good too , waiting for the rest of the slam dunk realeases I will buy them all , need more slam dunk !
続きを読む
役に立った
フィードバックを送信中...
フィードバックをお寄せいただきありがとうございます。
申し訳ありませんが、お客様の投票の記録に失敗しました。もう一度試してください。
違反を報告
レビュー を日本語に翻訳する

Vitaliy Fridman
5つ星のうち2.0 Buyer beware! No Japanese on this version of the release!
2015年5月13日にアメリカ合衆国でレビュー済み
Amazonで購入
The extra star is only for the fact that I love this show, but this is not a review of the show in general, but more of the release here. The description states that there is Japanese and an English dub. For those who vastly prefer the sub, this release lied to us. There is only an English dub with no choice for languages or subtitles. Very disappointing.
続きを読む
6人のお客様がこれが役に立ったと考えています
役に立った
フィードバックを送信中...
フィードバックをお寄せいただきありがとうございます。
申し訳ありませんが、お客様の投票の記録に失敗しました。もう一度試してください。
違反を報告
レビュー を日本語に翻訳する