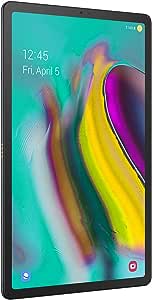 Vitaly Klyuev
5つ星のうち5.0 Outstanding Tablet
2020年5月5日に日本でレビュー済み
This tablet met all my requirements: the largest screen among all similar products on the market, high performance, SD card up to 128 GB, long lasting battery, excellent WIFI 2.4 / 5 GHz. The potential customer should not worry about the "Korean version" in the description on the Amazon page. My tablet arrived as a normal device: After pressing the power button, I was requested to select the language before the initialization procedure. The interface from very beginning was English.
続きを読む
役に立った
コメント 違反を報告
レビュー を日本語に翻訳する
すべてのレビューを参照します

Nick S.
5つ星のうち5.0 Solid tablet for most people; Good iPad Air alternative
2019年5月1日にアメリカ合衆国でレビュー済み
Amazonで購入
For many years I had android phones and iPad tablets. It was time for me to just stick with one ecosystem, and when I saw the S5e, I figured I would give android tablets another shot.

The first thing I noticed is the size: While having the same screen size as my iPad Pro 10.5, the Galaxy Tab is noticeably shorter, narrower, thinner, and lighter. It uses a wider aspect ratio on the screen (which has pros and cons), but for most movies and TV shows, than means the image you see on the Galaxy Tab will be larger than what you would see on the same size iPad due to it's more square-ish screen. (See my photo for size comparison -- the video is also about .6" larger diagonally on the Galaxy Tab.)

I spent a lot of time setting up the tablet just how I wanted, which for now kind of replicates an iPad. I chose the option to remove the app drawer and stuck with having folders of apps on my home screen. I then spent some time with the various apps I'm used to running on iOS along with apps that I normally ran on my phone. I have to say I am overall happy with the performance of the tablet. It is not quite as fluid as an iPad -- for example, when rotating the screen or opening app folders, the animation is occasionally ever so slightly jumpy rather than totally smooth. (I have the 128/6GB version, as I wanted the extra RAM.)

The speakers are really good, and there is no headphone jack. I have to say, given how thin this tablet is, I just might buy the argument that one wouldn't fit inside. (But I'd still rather have one.) A PASSIVE USB-C headphone dongle is included. This means that the included dongle will not work on many other USB-C phones. On the other hand, an active adapter like the one from my Google Pixel 3 will still work on the Galaxy Tab.

I am enjoying the screen -- it is bright and readable outdoors. It dims pretty low too, which is good for night reading.

I'm not a big gamer, and so my various casual games have no problems running on the tablet.

About the only issue I've been having is that I'm finding the fingerprint scanner/button a bit finicky. It's not clear to me the right way to turn on the tablet. Sometimes it seems like I need to press and hold, other times, just touch my finger to it, and other times it has trouble reading my finger on the first attempt. Some of this might be getting used to a very small/narrow reader, but it is a little annoying. At the time I wrote this, some other reviewers are saying there is a problem with the wifi when you hold the tablet sideways and cover the antenna with your hands. I could not recreate that issue on my device.

So, I'm pretty pleased and I think this will let me finally ditch the iOS ecosystem (and lightning cables). My actual star rating would be 4.5.

PS -- I do think a case is needed for this. It is very thin and, while it doesn't feel flimsy, some reinforcement is good. At the moment, Samsung's official (non-keyboard) case is a mind boggling $70 for a basic plastic folio case. I ordered one elsewhere, but I do think the official one looks good. Maybe if it goes on sale sometime.