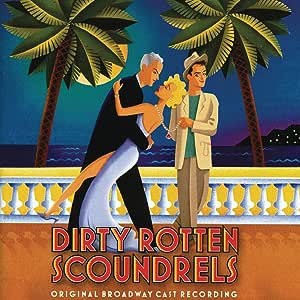 With this giddily entertaining show, David Yazbek confirms that The Full Monty wasn't a fluke--few on Broadway can equal his melodic verve and lyrical cleverness. Based on the 1988 movie of the same name, the show deals with a pair of con artists swindling rich women on the French Riviera. Lithgow brings debonair charm to the Michael Caine part, while Norbert Leo Butz (Wicked) proves to be a comic dynamo in the Steve Martin part. And Yazbek provides them with an array of catchy tunes (adorned in beautiful Bacharach-style arrangements by Harold Wheeler). Butz goes ballistic on the hilarious "Great Big Stuff," which demolishes conspicuous consumption, then pairs up with feisty leading lady Sherie Rene Scott on "Love Is My Legs," a wicked sendup of Celine Dion­style torch epics. Meanwhile, Lightgow nails the tender ballad "Love Sneaks In." A delicious jazz reprise of "Nothing Is Too Wonderful to Be True" by Scott and pianist Bill Charlap shows that Yazbek's songs don't need flashy pizzazz to be memorable. --Elisabeth Vincentelli

Other Great Musicals of the Season

Ingbert Edenhofer
5つ星のうち5.0 hilarious!
2010年1月21日にドイツでレビュー済み
Amazonで購入
I have not yet seen the movie on which the musical is based but I suppose that most of the outrageous shenanigans are taken from it. Well, so what? This does not keep "Dirty Rotten Scoundrels" from being one of the funniest musicals ever written. With its name-dropping, foreign-language vocabulary, inventive rhymes and catchy music, it feels like the sort of show Cole Porter would write today if he was still alive.

The first really great number is "What was a Woman to do", sung by the always great Joanna Gleason - I was fortunate to see her do the role on stage, and she does not have enough to do on the recording. Still, she is lovely and gets lyrics like "If music be the food of love, he ate my Smörgasbord." Norbert Leo Butz and Sherie René Scott of "The Last 5 Years" are reunited. I am not that big a fan of their work but they sell their numbers very well, especially her "Here I am" is wonderful. One of the best number from "Dirty rotten Scoundrels" (and really any musical) is their duet "Love is my Legs", which takes a metaphor and runs with it into total absurdity while Butz and Scott sing it as if they were being totally genuine.

Even though Butz won a Tony for his role, it is John Lithgow who thrills me the most on this recording - and he also shone on stage. Yes, I think that "Love Sneaks in" is the sourest note in the score - it simply does not make sense and seems like a halfhearted attempt to include some emotional gravitas. But his other numbers, particularly "The More we Dance" and even more so "Rüffhousin' with Shüffhausen" are stand-outs. After seeing him on "Dexter" as a psychopath and mass murderer, it is testament to his overwhelming talent that he is totally believable in the silliness of "Dirty Rotten Scoundrels".

The production of the CD is very entertaining in itself. Before the denouement, John Lithgow addresses the listeners, suggesting they see the show first before listening to the rest of the CD; there is also a decoy plot in the synopsis. Among the bonus tracks are two demo recordings of David Yazbek singing songs he wrote for the show.

So, it is not only a delightful score but also a CD per se that is so worth having!

Marijan Bosnar
5つ星のうち4.0 ONE OF THE HIGHLIGHTS CURRENTLY ON BROADWAY
2005年12月5日にアメリカ合衆国でレビュー済み
Amazonで購入
"Dirty rotten scoundrels" is without a doubt one of the highlights Broadway has to offer this year. Most people are familiar with the 1988 movie starring Michael Caine and Steve Martin and it is upon this movie the musical is based.

This is the second show written by the composer and the lyricist David Yazbek, the first one, "The full monty", being also made on the basis of a movie. This recording confirms David Yazbek's talent for writing excellent musical comedy shows, a genre that often seems to be underrated nowadays.

The story corresponds to the one in the original movie: we follow the adventures of the two tricksters, Lawrence (John Lithgow) and Freddy (Norbert Leo Butz) in the French Riviera, while they are trying to woo a rich American heiress Christine (Sherie Rene Scott). Of course, things are much complicated than that, so in the end the story takes an unexpected turn.

This CD has the principal musical numbers, thus being a nice summary of the show and at the same time it is also a very enjoyable listening. The score boasts with the tuneful melodies that win over the listener from the very beginning. However, this show would loose much of its appeal if it weren't for David Yazbek's catchy and humorous lyrics. There are many lyrical parts that will make you laugh throughout this show, "The Bushes of Tex/Were nervous wrecks/Because their son was dim/But look what happened to him", being just one of them. This sort of clever and witty remarks blends perfectly with the liveliness of the score.

The cast was wisely chosen. John Lithgow has just the right amount of humour and sophistication the character of Lawrence calls for, while Norbert Leo Blutz and Sherie Rene Scott are also very noteworthy. Joanna Gleason must also be mentioned. She plays an American divorcee Muriel, and her rendition of "What was a woman to do" is one of the best songs on the CD.

The CD comes with a synopsis, libretto, the lyrics and the production pics. Apart from the main musical numbers, it also features a funny warning message from John Lithgow for the home listeners and three bonus tracks. Two of them are demo recordings sung by David Yazbek himself and the third is Sherie Rene Scott singing her big number "Nothing is too wonderful to be true", accompanied by the piano only.

If you are looking for a good show from the current Broadway season, or simply a fine musical comedy, look no further. "Dirty rotten scoundrels" will provide both plus a good score packed with witty lyrics.

A Longtime Customer
5つ星のうち4.0 Excellent soundtrack -- and I've seen the show
2005年5月18日にアメリカ合衆国でレビュー済み
Amazonで購入
I saw this show on Broadway about a month ago and have been waiting for the release of this CD since then. It's quite a good recording of all the show's music. I would probably avoid buying it until you have seen the show, but then again John Lithgow does use Track 17 to humorously warn you that the tracks which follow could give away the plot's twists and turns -- which is awfully gentlemanly of him. The jacket has a great synopsis of the plot and all lyrics included, in case like me you can't quite understand every one of Lithgow's words in the songs with the 'Schiffhausen' accent. My favorite song has to be Lithgow's 'Love Sneaks In', which is short but sweetly done with the emotion that I love from Lithgow in his work.

The CD also has three demo tracks at the end from David Yazbeck. Two out of three are wastes since he performs them himself -- the production versions of 'Ruprecht' and 'Here I Am' are done much more effectively than these pitiful demos. However, the demo of 'Nothing Is Too Wonderful' with Sherie Scott singing is a different twist on the song which I really enjoyed -- the kind of mellow piano-based tune you'd expect to hear in a jazz bar. Quite nice, in my view.

Bradley Friedman
5つ星のうち5.0 "Really great big stuff!"
2005年12月7日にアメリカ合衆国でレビュー済み
Amazonで購入
I bought this CD after the Tonys came out, along with all the other nominees. After a certain amount of disappointment over SPELLING BEE and LIGHT ON THE PIAZZA, I left this CD on the counter for months. I finally opened it a few days ago....and CANNOT stop listening to it!!! Wonderful performances, (especially by Sheree Renee Scott and Joanna Gleason in terms of vocals, but the men are really funny), hilarious lyrics (the song about brother Ruprecht is a scream), and even one song that - in an added track at the very end - Scott proves could become a cabaret or jazz standard. I have heard repeatedly that the CD cannot do full justice to the live performance, and I am sure that this is true. However, as one reviewer put it, the "relistenability factor" is proof of this CD's success. How rarely one comes across that in a musical comedy CD anymore. I'm saving my pennies to get to NYC as soon as possible to see the show.
続きを読む
7人のお客様がこれが役に立ったと考えています
役に立った
フィードバックを送信中...
フィードバックをお寄せいただきありがとうございます。
申し訳ありませんが、お客様の投票の記録に失敗しました。もう一度試してください。
違反を報告
レビュー を日本語に翻訳する

J. Hellman
5つ星のうち5.0 Cole Porter would love this one
2006年4月11日にアメリカ合衆国でレビュー済み
Amazonで購入
Pointed, witty lyrics have not disappeared from Broadway. As he did in The Full Monty, David Yazbek has created memorable music full of great jokes, snide remarks, and snappy rejoinders. I had the good fortune to see the show on Broadway. John Lithgow and Sherrie Rene Scott had moved on but Jonathan Price and Rachel York were doing wonderfully as their replacements. All the major characters were very well done but Norbert Leo Butz as Freddy Benson stole the show. He really earned his Tony award for this part and continues to earn it with every show. As Freddy Benson might do, you'll laugh till the beer comes out of your nose! Don't miss the show on Broadway if you can get there. Catch it on tour next year. This is one of the best.
続きを読む
2人のお客様がこれが役に立ったと考えています
役に立った
フィードバックを送信中...
フィードバックをお寄せいただきありがとうございます。
申し訳ありませんが、お客様の投票の記録に失敗しました。もう一度試してください。
違反を報告
レビュー を日本語に翻訳する

tvtv3
5つ星のうち3.0 Funny But Forgettable
2014年2月5日にアメリカ合衆国でレビュー済み
Amazonで購入
I enjoyed the movie DIRTY ROTTEN SCOUNDRELS. I also really like John Lithgow and Norbert Leo Butz as performers. Therefore, I was really looking forward to listening to the DIRTY ROTTEN SCOUNDRELS SOUNDTRACK from the Broadway musical. The lyrics of the songs are witty and zany; in one moment a song lyrics with a classic Broadway reference in one line and then vulgarity in the next line. Despite this zany originality and humor and that many of my theatre friends love the show, I find most of the tunes in DIRTY ROTTEN SCOUNDRELS to be forgettable. Personally, there are only two songs on the DIRTY ROTTEN SCOUNDRELS SOUNDTRACK that I enjoy: "Like Zis/Like Zat" and "Love Sneaks In." "Great Big Stuff", "Oklahoma?", "All About Ruprecht", and "Here I Am" are also memorable, but I just don't enjoy them. John Lithgow, Norbert Leo Butz, and Sherie Renee Scott and the rest of the cast give some fine performances, but after having been in a local production of the show and having listened to the soundtrack umpteen times, there's just not much in it that sticks with me.
続きを読む
2人のお客様がこれが役に立ったと考えています
役に立った
フィードバックを送信中...
フィードバックをお寄せいただきありがとうございます。
申し訳ありませんが、お客様の投票の記録に失敗しました。もう一度試してください。
違反を報告
レビュー を日本語に翻訳する

Ruth Roche
5つ星のうち5.0 A MUST!!
2005年9月1日にアメリカ合衆国でレビュー済み
Amazonで購入
After friends and I went to see Dirty Rotten Scoundrels the first time, we immediately ordered tickets to go see it again! If it hadn't left our city to go to Broadway we would have seen it several more times. A fantastic, talented cast! Very clever, funny lines in both the speaking parts and the songs! Terrific music! Since receiving the CD about a month ago I have probably played it 100 times--and I'm still not tired of it. If you can get to New York to see this gem, do it. If not, you will still enjoy the CD. The CD comes with a booklet that contains all the lyrics to the songs.
続きを読む
1人のお客様がこれが役に立ったと考えています
役に立った
フィードバックを送信中...
フィードバックをお寄せいただきありがとうございます。
申し訳ありませんが、お客様の投票の記録に失敗しました。もう一度試してください。
違反を報告
レビュー を日本語に翻訳する