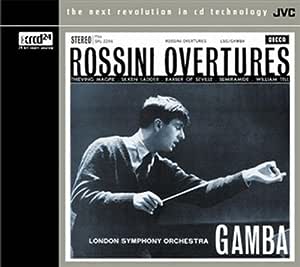 This special collection of operatic music composed by Gioacchino Rossini contains five of his most famous works including "The Barber of Seville," one of the most famous pieces of operatic music. The "Rossini Overtures" are performed here by the London Symphony Orchestra, as well as the compositions "The Thieving Magpie," "The Silken Ladder" and "William Tell," the last opera Rossini ever wrote. Available on CD for the very first time, this title will dazzle you with a spectrum of musical energy. Re-mastered by JVC using their exclusive XRCD24 technology, the sound quality of this release will make you want to put away your LP version for safe keeping! (Previously deleted:11/1/05. Original release date:11/16/04)

I. Giles
5つ星のうち5.0 An absolutely scorching set without any sort of parallel musically or as a re-master
2013年9月18日に英国でレビュー済み
Amazonで購入
This disc, recorded in November 1960 in the Kingsway Hall, has always been a favourite with collectors and critics alike. At that time it came into competition with Beecham who was more graceful and gracious, with the younger Colin Davis who was more muscular and various others including Reiner with the CSO in full cry - just too full for any sense of emotional scale.

The recorded sound was, in its time, a ground-breakingly realistic event with all the brilliance associated with Decca recordings of that era. The LSO was also at one of its many peaks of corporate and individual virtuosity at that time. To this potentially spectacular mix was added the Italian temperament of Perino Gamba. The result was a case of 'light the blue touch paper and stand well back!'

These performances have enormous flair and energy far beyond any of the competitors at that time. To say that they sparkle is to pay them scant tribute. It is not surprising that for many collectors this disc has become a yardstick by which all others must be judged and to be found wanting.

Various respected recordings since then have been made by Marriner (far too suave - where is the edge?), by Chailly twice (too heavy the first time and too orchestrally scrappy the second time), by Abbado (too neat and restrained)and by Karajan (probably the best of the rest but not a patch on Gamba's unbuttoned fizz). And so the list could continue. The period specialists have also had a go and here there really is some serious competition, notably by Goodman and his Hanover band on RCA. The conductor-less Orpheus Ensemble are also surprisingly good in their chamber way but Gamba still carries the torch for these front runners for unbeatable excitement.

This particular JVC XRCD edition was remastered using 24 bit technology as the starting point in an extensive effort to set a new standard in 2004. At the conclusion of all this effort as described in the booklet, all one can say is that the effort was certainly worth it based on musical criteria alone. The improvement in sound over the previous CD version is hard to describe as it delivers complete credibility and defies any suggestion of age. The playing time is short by modern standards at nearly 45 minutes but the musical values are astronomical as delivered by both the musicians and the re-mastering team at JVC. This is a remarkable transformation, costly though it may be.

I would suggest that, if the finances can be found , purchase should be seriously considered. There is nothing else like it in terms of Rossini overtures and in this version the effect is electrifying!