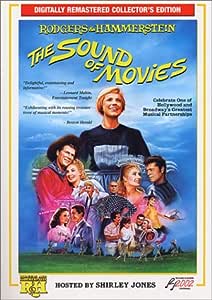 I
5つ星のうち5.0 Wonderful for R&H Fans
2005年11月4日 - (Amazon.com)
Amazonで購入
Aside from the excellent documentary the extras are a great bonus-especially the screen tests (these are on the second release of this title with Digitally Remastered Collector's Edition on the top of the front on a red background). For the remake of STATE FAIR you get to see Ann-Margret's entire original Fox screen test, she sings Bill Bailey, Mack the Knife and in a test for the role of Margy she does a scene and sings It Might As Well Be Spring. Also included are test scenes for the part of Emily-the part she played in the movie. Andy Williams tests for the part of Pat (the reporter) with Barbara Eden as Margy and he sings a bit of All I Owe Ioway (he's from Iowa) and then does a great version of It Might As Well Be Spring. There's also something called Foreign Dubbing Test/The Sound of Music which is Marni Nixon singing most of the songs Julie Andrews sings in the movie. They don't explain exactly what it's for but it's a nice bonus. Mitzi Gaynor performs A Cockeyed Optimist and A Wonderful Guy in her test for South Pacific. There are also a bunch of Sound of Music tests as well. Since these aren't on the DVDs of the movies themselves they are a great addition for R&H movie fans.
続きを読む
11人のお客様がこれが役に立ったと考えています
レビュー を日本語に翻訳する

Michele S. Techman
5つ星のうち5.0 This is a Wonderful Documentary
2005年9月4日 - (Amazon.com)
Amazonで購入
I have the first one The Sound of Movies one on VHS that I bought back in 1996 and this new DVD version is so much better than the one I have on VHS.

There is so much more information about the movies than before and seeing the screen tests were pretty interesting also.

Although I think on some of the screen tests they went a little overboard and after a while that part got a little tedious.

Otherwise I love how they put each movie into a chapter and I can then go to the movie I want to see.

I recommend this DVD to any Rodgers & Hammerstein, Julie Andrews and fans of movie musicals in general.

This would make a wonderful Birthday or Holiday Gift for a close friend or family member.
続きを読む
5人のお客様がこれが役に立ったと考えています
レビュー を日本語に翻訳する

Bernie
5つ星のうち5.0 Delightful R&H Musicals
2016年1月26日 - (Amazon.com)
Amazonで購入
Lovely musical - including my "very favorites". Brings back fond memories, especially when they were first released in the movie theaters! And, the Tape is excellent. THANK YOU.
続きを読む
レビュー を日本語に翻訳する